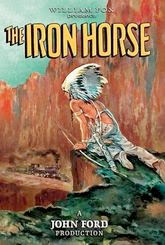 We must plan for the peace to come – these are the sentiments of Abraham Lincoln as he prepares to commit U.S. dollars to a project that must have seemed impossible, the transcontinental railroad. It is sometimes forgotten that this project was commissioned during the American Civil War, and like Lincoln’s plans for reconstruction, it was part of Lincoln’s vision of a unified United States after the restoration of peace. John Ford’s epic The Iron Horse, which purports to be an accurate and faithful account of the events that led to the building of the railroad, begins at a time when the bridging of the two coasts was viewed as a pipe dream and ends with the driving in of the golden stake that marked the realization of so many people’s dreams. Between these two moments in time are a sappy love story, a tale of revenge, tons of characters that come across as silly for no particular reason, and battles between whites and American Indians. Only some of these elements work.

The Iron Horse begins in Springfield, Illinois some time before Lincoln’s ascension to the presidency. There, a surveyor named Mr. Brandon stares into the distance, his mind picturing the tracks that he envisions running across America. His neighbor Thomas Marsh (Will Walling) is skeptical and says he is chasing a rainbow, a rainbow that their neighbor Mr. Lincoln (Charles Edward Ball) says that everyone will be riding on one day. Nearby, Mr. Brandon’s son Dave is fine tuning his surveying skills, clearly following in his father’s footsteps. Working with him is Marian Marsh, who looks at Dave with such pride and affection that we know they will somehow come together in the end – in spite of their relatively young ages. So inspired by the prospects of the railroad is Mr. Brandon that he decides to take Dave and move to the West to be part of the mammoth building project that he senses is inevitable. He doesn’t make it. Instead, he is the victim of a savage attack, as a mob of Cheyenne Indians and one white man dressed in tradition Cheyenne garb set upon him and kill him. However, before his untimely death, he looks into the mountains and sees the route the future railroad should take, information that he shares with his equally enthusiastic son.

It is interesting to note that for some time Dave Brandon disappears from the film. In place of his story, we see national developments pertaining to the railroad. The Civil War ends, immigrant laborers are hired to build the tracks, and former Confederate and Union soldiers join the force laying track. We see that as the railroad extends, it encroaches upon land that has traditionally belonged to American Indians, and this causes confrontation and ambushes to erupt. In an interesting scene, workers are forced to put down their tools, pick up their guns, and engage in a fire fight. A moment later, they put the guns down, pick back up their tools, and go back to work, as if the attack were a normal, everyday occurrence. We even meet historical figures like Buffalo Bill and Wild Bill Hickok. All of this is interesting and adds a level of authenticity to the film.

Damaging this authenticity somewhat is the film’s supporting characters, many of whom seem to be being used as comic relief, from Judge Haller, who presides over a courtroom that moonlights as a saloon, to Sergeant Slattery, Private Schultz, and Corporal Casey, Civil War veterans who should be leaders on the assembly line but come across as predecessors to the Three Stooges. When Dave (George O’Brien) finally reappears, he switches the film’s focus somewhat from the construction of the railroad to matters of the heart. We’re asked to care whether he and Marian (Madge Bellamy) will end up together despite the fact that she is engaged to a slightly older man. Since the answer to that question is a foregone conclusion, it is unfortunate that the film spends so much time on this point. The film does not become less predictable with the addition of Deroux, a rich landowner who owns much of the Smokey River, the area that the railroad is being built around. Once his secret is revealed, it’s not hard to predict how his role in the film will end.

On the plus side, the film’s conclusion is well done. Even today, the sight of two sets of railroad tracks converging and the last spike being laid is enough to fill one with a sense of pride. It was tempting therefore to set aside the reservations I had about what had preceded it, and to a certain point, I was able to. In the end, The Iron Horse is entertaining, exciting, and slightly disappointing due to its predictability and a few preposterous moments – an odd combination indeed. (on DVD)