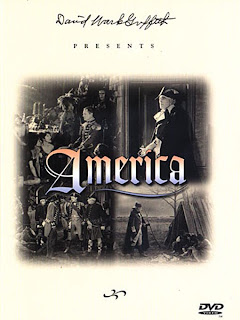 D.W. Griffith’s well-acted America is essentially three love stories. It is first the story about the love of a young working man and a young aristocratic woman. It is also a story about the love people have for their mother country, as well as a story about people’s love of liberty and self-determination. It is 1775, and Nathan Holden (Neil Hamilton), an express rider in Lexington, Massachusetts, is madly in love with Nancy Montague (Carol Dempster), the daughter of a Virginia judge descended from British nobility, a man who despite having been born in the colonies is deeply devoted to Great Britain and the King. It is a time when war seems more of a children’s game than an impending reality, even to those in support of greater autonomy for the colonies. However, with the country split between those who call anyone advocating more self-rule traitors to the crown and those who cannot reconcile themselves with the fact that they are being asked to be loyal and pay taxes to a country whose government affords them no representation, conflict is almost inevitable. When war indeed comes, it divides not only the country but also potential lovers, people like Nathan and Nancy, and long-time friends, such as Mr. Montague (Erville Alderson) and General George Washington (Arthur Dewey), along ideological and political lines.

The beginning of the film uses short scenes to establish the political climate of the times. We see William Pitt presenting the Colonies’ arguments in front of Parliament, King George rejecting arguments favorable to the Colonies, and the governor of Massachusetts taking a hard line against the people of his state. For the citizens of Massachusetts, it will be taxes or the bayonet. Having established the political atmosphere, Griffith now uses much longer scenes to show viewers the start of the Revolutionary War. We see Paul Revere’s Midnight Ride, the first battle of the war including its infamous “accidental” first shot, and the battle of Bunker Hill. Each scene is spectacularly shot, giving viewers a chance to see the heroic nature of those soldiers who sacrificed themselves for a concept that they held dear enough to die for.

Summoned to arms, Nathan joins the Minute Men and heads off to war, but not before visiting Nancy one last time. In order to talk to her face-to-face, he stands on his horse outside her bedroom window. Of course, the horse moves, and he is forced to enter her bedroom window slightly to keep from falling. This is witnessed by Mr. Montague, who assumes Nathan is trying to have his way with Nancy, and therefore, Nancy’s brother Charles is compelled to defend his sister’s honor in a pistol duel that it appears they will have in the Montague’s kitchen. This act of chivalry though is interrupted by a call to arms, and Nathan rushes off to join Parker and his men on the battlefield. Following common Hollywood cliques, this prompts Nancy to tell Nathan that she will love him no matter what side he fights on. This sentiment doesn’t last long though. A little bit later, she utters this line to him, “You… you have killed my father – you rebel!” However, we have a notion that this sentiment will not prove to be permanent.

The film’s villain is Captain Walter Butler (powerfully played by Lionel Barrymore), a man whom according to the film’s intertitles other British officers would later refuse to shake hands with. Captain Butler secretly plots to betray his King and rule America as viceroy. He is a man who advocates the use of brutal force and allows his men and the Native Americans that have sided with him to carry out personal grievances as they wage war in the Northern part of the colonies. To hide their violent actions, Butler’s troops occasionally don Native American war paint when they commit atrocities. The movie seems to suggest that this act allows them to hide their identities from society while at the same time making them more warlike in nature. In addition, Capt. Butler sets his eyes on Nancy, whom Butler sees as just another of his conquests. Unfortunately for Nancy, Mr. Montague couldn’t be more pleased with the Captain’s interest in her.

It is unwise to expect a two and a half hour movie to do justice to the length, brutality, and sacrifices of both sides involved in the American Civil War, as not even PBS’s excellent six-hour documentary Liberty: The American Revolution could fully detail the war. That said, America does a good time showing events on both a national and personal scale. As the war progresses, so too do the characters, in particular, Nancy and her father. Nathan proves himself every bit the hero, just as Capt. Butler proves to be the kind of enemy you actively root against. The movie does not address slavery or the role that slaves played in the war, and some contemporary critics have expressed reservations – somewhat understandably - over the film’s portrayal of Native Americans. However, the film has more than enough going for it that viewers should have no problem enjoying the film the way it is. (on DVD)