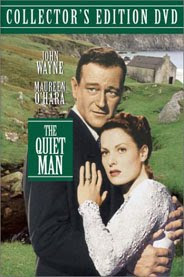 Picture this for a moment. A man is dragging a woman somewhat roughly through the Irish countryside. On occasion, the woman stumbles, and the man, showing absolutely no concern for her welfare, forces her back to her feet and continues pulling her towards their destination. There are even moments in which he throws her to the ground. Following behind them is a procession of townspeople, eager to see how the physical confrontation that they suspect is coming will turn out. One townswoman even picks up a stick and offers it to the man, so that he can “beat the lovely lady.” Are you feeling the glory of the scene yet? I ask this because the music playing in the background is designed to make this trek seem grand, as if somehow it represents a remarkable turning point in the man’s life. Soon the man has arrived at his destination and is standing face-to-face with his nemesis, possibly ready to do battle. But let’s pause for a moment and reflect on what we have just seen. Now, it takes me roughly thirteen minutes to jog one mile. Judging from the man’s pace, which was a bit slower than mine is, I’ll say he could walk one mile in about 17 minutes. Now, earlier in the film, we’re told that the journey from the train station in Castlemaine to Innisfree is five miles, so, if one does the math, by the time the man reaches his destination, he has been dragging his wife for almost an hour and a half. You tell me: Just where exactly is the grandeur in such a scene?

This scene can be found is John Ford’s 1952 film The Quiet Man. The man is Sean Thornton (John Wayne), an Irish-American who returns to his childhood home in Innisfree, Ireland, to start a new life. The woman is Mary Kate Danaher (Maureen O’Hara), a woman with a quick fuse and a sharp tongue. They have one of those odd courtships that could only occur in a movie. He sees her tending sheep and is immediately enraptured by her beauty. She sees him on the same occasion and cannot resist looking back from time to time to see the town’s new resident. And that’s pretty much all the contact they have with each other before they’re locked in a passionate embrace and thinking they’ve found the person of their dreams. Some people might sigh at the sheer romantic nature of their relationship; I simply didn’t buy it. Standing in the way of their desired nuptials is Mary Kate’s brother Squire “Red” Will Danaher (Victor McLaglen), who, predictably, says he would rather see his sister dead than married to Thornton. Squire Danaher wants to buy the same land as Thornton and when the land goes to Thornton, the Squire makes it clear that he and Thornton are enemies.

Throughout the film, we meet our fair share of other colorful characters. There’s Michaleen (Barry Fitzgerald), who appears to be in charge of ensuring that courtships are done according to long-standing Irish tradition. There’s also Father Peter Lonergan (Ward Bond), who has been trying to catch the same fish for ten years. In addition, there’s Father Paul Playfair (James O’Hara), who recognizes Thornton from somewhere, and his wife Elizabeth (Eileen Crowe). It is Father Playfair whom Thornton will later turn to for advice in one of the movie’s best moments. These and other Irish characters are an odd mix of admirable individual traits and rather negative stereotypes. The townspeople seem pleasant enough, accept Thornton pretty quickly, and have some of the most interesting conversations regarding time and directions you’re likely to see in a film. To me, these characters, the conversations they have, and the things these conversations reveal about Irish culture were far more interesting than the main story. That said though, most of the characters in the film consume more than their fair share of alcohol, and all of them, even those in official Church roles, seem to derive enormous pleasure from seeing two men go at it in hand-to-hand combat. This latter quality is meant to be humorous but it is pushed to such an extent that the film’s climax devolves into utter silliness.

The Quiet Man feels as if it is from a time that most audiences will simply not recognize. After all, what are contemporary audiences to think when Michaleen instructs Mary Kate not to hit her husband until after they are married, when he can hit her back? Is that meant to be funny? Is it meant to show us the “Irish culture”? What are we supposed to think when Thornton kicks down a locked door, forces Mary Kate into his arms, picks her up, and throws her onto a bed that breaks instantaneously? Are these really the actions of a romantic hero? I suppose some will say I’m being too critical of this aspect of the film. After all, the film was made in the 1950s, a time when it was common for movies to have a scene in which a woman goes hysterical only to be brought back to her senses by a quick slap that her husband didn’t “want” to give her but “had” to. In Drums Along the Mohawk, another John Ford film, Henry Fonda is handed a stick with which he is told to control his wife, and he even places it above his fireplace, perhaps as a warning. However, there is a difference between a character being given something that he never uses and John Wayne throwing Maureen O’Hara around like a toy and it being presented as manly or what she deserves, which is clearly what the townspeople following them believe.

The Quiet Man builds up to an inevitable confrontation between Thornton and Squire Danaher, but when it finally comes, the bout is a letdown. We’re led to believe that Thornton has incredible physical strength, yet if he did, the fight would not last as long as it does. We’re also led to believe that Squire Danaher can knock someone out in one punch, but Thornton is somehow able to take an incredible amount of punishment and keep rising to his feet for more. To make the moment even more awkward, the townspeople, including the police and the members of the Church, all cheer and place bets on the fight. In other words, what had been preceded by soul searching and real worries about the ability of a man to permanently injure another man is replaced by an attempt at slapstick comedy. I wasn’t laughing.

It’s clear that I’ve gone against the grain with this review. Martin and Porter give the film five stars. Furthermore, a quick glance at some of the reviews on IMDB, where the film has an 8.0 ranking, reveals that many people have no problem with the film’s treatment of women. Some even suggest that it represents part of Mary Kate’s plan to turn Thornton into a proper Irish gentleman. There is certainly evidence to back this up, but I prefer to believe that mistreatment of women and fist fights to solve problems are the result of social problems and not as a part of culture. I could be wrong, but the world makes more sense to me that way. (on DVD)