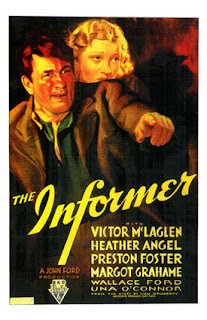 John Ford gave viewers rather contrastive views of Ireland. The Ireland he depicted in his 1952 film The Quiet Man was an absolutely beautiful land, full of impressive greenery, mountainous terrain just begging to be explored, and people filled with a great sense of pride in their country and culture. Sure they have their squabbles, but for the most part, they are decent people who just happen to like alcohol and the occasional fisticuff. By the end of the film, audience members no doubt see Ireland as a particularly special place, one where love can blossom at any age and happy endings are possible for all people honorable enough to deserve one. This is not the Ireland viewers saw just seventeen years earlier in Ford’s impressive 1935 Oscar-winning drama The Informer.

Ireland, as it is depicted in this earlier film, is a place of perpetual danger, conspiracy, suffering, and relationships that are often sacrificed for loftier goals. Fog surrounds the streets of Dublin, and the figures that wander the city stealthily at late hours are just as likely to take someone in for questioning as doff their hats politely. For Gypo Nolan (Victor McLaglen), a character that may go down as one of the most sympathetic characters in cinematic history, Dublin offers little solace. Hungry and unemployed, ostracized and distrusted by those he formerly called friends, Gypo has only one thing going for him – his girlfriend Katie Madden (Margot Grahame), a young woman who is also showing signs of desperation. Towards the beginning of the film, a wealthy man strolls close to her as she is standing at a street corner in a fairly deserted area. The man’s intentions are clear; Katie’s reaction to those intentions is less so. She doesn’t run away or protest, yet she also doesn’t look quite inviting either. Instead, she looks confused – perhaps even a little afraid. However, after Gypo forcefully removes the man from her presence, she unleashes a series of rather stinging comments. Their essential message: that Gypo is not the man he should be.

Perhaps this is why a poster continues to haunt Gypo. He sees it everywhere he goes. A physical copy of it even appears to be following him for some time, as it is were a ghost or an awful memory that he just couldn’t shake. And it’s not hard to see why, for the poster offers Gypo a chance at redemption in the eyes of the woman he loves. On the poster is the announcement of a twenty quid reward. However, to get the reward, he would have to inform on Frankie McPhillip (Wallace Ford), one of the only people who continues to treat him with respect. We learn that Gypo and Frankie were a team – Frankie was the brains, and Gypo was the brawn. That’s all changed now, yet the bond between them remains strong, and therefore, Gypo struggles mightily with his conscious. Ultimately, he makes the wrong decision.

Much of the first half of The Informer focuses on Gypo and the decision he makes. In the latter half of the film, Ford enlarges the film’s scope by introducing new characters and emotional issues. We meet the leaders of the underground independence movement that Frankie belonged to, a group that – rightly or wrongly - long ago deemed it necessary to employ violence in their struggle for independence. For this group, the dead are to be respected and avenged, and the struggle for freedom takes precedence over everything else – even love and family. We also see evidence of the existence of two Irelands – one full of wealthy patrons who delight in their privileged status and have no interest in pursuing regime change and another less affluent and less politically powerful group. In fact, the only quality some of them seem to both share is greed, for without money, Gypo is considered a bum; with money, he is hailed as “King Gypo” and lauded for his impressive fighting spirit – at least until the money runs out.

It’s not hard to guess that suspicion will eventually turn to Gypo, and yet the film never becomes predictable. Part of what keeps The Informer consistently interesting is the way it presents the audience with a rather difficult moral dilemma. We like Gypo, but we know he’s done something wrong. We know he should be punished, yet we wonder whether justice should be meted out by a shadowy group in the dead of night, or if his execution should be carried out by whoever draws the shortest stick. And then there’s the uncomfortable way that some characters begin excusing Gypo’s actions by asserting that he “didn’t know what he was doing.” Of course, he did – he just underestimated the consequences to Frankie, as well as to himself. (on DVD)

*The Informer won four Oscars at the 1936 Academy Awards – Best Actor, Best Director, Best Screenplay, and Best Music. It lost the Best Picture trophy to Mutiny on the Bounty.
Posted by Azrael Bigler at 8:44 AM