Review – The Lady of the Dugout 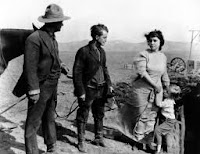 W.S. Van Dyke’s The Lady of the Dugout is not a film about baseball. The dugout referred to in the film’s title is actually a small man-made home build in the ground somewhere in the middle of the West, and it is in this sad dwelling that a family of three is trying its best to survive. When we meet them, they have already gone a few days without food. The patriarch of the family has turned to alcohol to get through the days, and there are hints that he has become someone whose temper is to be feared. We later learn what led the family to be in such a precarious state, and it turns out to be very similar to what people are presently going through – big dreams, bad loans, and unscrupulous banking practices. So much for the West always being the land of fortune and opportunity.

The Lady of the Dugout begins with a rather clunky narrative device. Two men are sitting outside reading the newspaper. Why one of them is reading a newspaper from five years earlier, I’ll never know, but because he is, he happens upon an article about a dangerous outlaw named Al J. Jennings. The man learns from his companion that Mr. Jennings is now an evangelist, and before there’s much time for an explanation, in walks Mr. Jennings with his brother, Frank. Both of them look as if the years have been tough on them. Eventually Al is enticed to share a story from his outlaw days.

Modern-day viewers have seen this kind of set up before, yet it’s doubtful that they’ve ever seen it done in this way. First, Al and Frank Jennings were real people, and they are actually playing themselves in the film, which was the first of only two films produced by the Al Jennings Production Company. The film is surprisingly honest in its depiction of these two men. It doesn’t try to hide the fact that they were bank robbers or that they injured people during their criminal acts. In one scene, Al goes to great lengths to explain that a bank robbery was not premeditated, as if this somehow excuses the act. However, what we see Al doing during the robbery could hardly be described as avoiding violence. Second, it’s not unreasonable to expect that a movie told from the point of view of a certain character will be chiefly about that character. We would also expect for him to be involved in any courageous acts or romances that form as the story progresses. However, here too the film surprises, for when romance does blossom, it involves Frank, not Al. The film also does not try to make their robberies more than they were. There is no snappy dialogue, no elongated gun fights, and no self-righteous speeches from either the outlaws or the lawmen pursuing them. Al and Frank just walk in, hold the place up, and then try their best to get away. It’s that simple, and I imagine that most actual bank robberies are like this.

While the film does not sugarcoat the crimes that Al and Frank committed, it does however present them as modern-day equivalents of Robin Hood, for we frequently see them using the money they acquire during their crimes in rather altruistic ways. Early in the film, we witness Al and Frank steal $5,000 from a bank and escape from the sheriff and his deputies into the empty western plains. There they meet a woman named Mary (Corinne Grant) and her son (Ben Alexander). They ask her for food, and she politely responds that she has none to offer them. On a side note, I’ve always been amazed at the hospitality that seems to have existed in the West. Strangers would arrive, ask for food and shelter, and most often receive both without many questions being asked of them. I wonder if this has something to do with the shared experience of having sought a better future in a new and dangerous land. Back to the film: Moved by the lady’s terrible plight, Al decides to ride twenty-four miles to the nearest home to try to buy some food. Frank remains with the woman and her son, not because they are his hostages, but because Al is the smallest of the two and can therefore ride the fastest. While Al is gone, Frank begins to bond with Mary and her son, and later there’s a nice moment in which Frank decides to forgo dinner so that Mary and her son will have something to eat at another time. Eventually he and Al decide to try to get some of Mary’s money back from the banker who repossessed her house years earlier.

The Lady of the Dugout is a rather remarkable film, filled with fascinating characters and emotional twists and turns. I have no doubt that the film will leave viewers wanting to see more of Mr. Jennings’s stories, which, it should be said, he intended to be cautionary tales exploring the devastating costs that a life of crime can have. Unfortunately, this is all there is. According to the film’s production notes, Al and his brother were the targets of Congressional bills that aimed to prohibit films about “ex-convicts, desperadoes, bandits, bank robbers, or outlaws.” While the bills did not pass, Hollywood essentially adopted them anyway. This meant that it would be a long time before a film like The Lady of the Dugout would again be made. The film also contains excellent performances all around. However, Corinne Grant’s deserves to be singled out. It’s hard to believe that she made only ten films. (on Disc 3 of Image-Entertainment’s Treasures 5: The West 1898 – 1938)