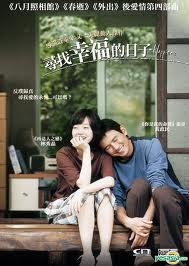 In a pivotal scene early in Jin-ho Hur’s moving 2007 film Happiness, we witness a woman sitting calmly by herself outside a small market in the middle of the Korean countryside. A man comes out of the market carrying two cans of beer and some snacks and parks himself down near the woman. Then, for not particular reason, he starts to inch his way closer to her. The woman is understandably unnerved and begins increasing the distance between them. The man, delighted at the unease that he has caused, quickly resumes his encroachment of her personal space. Eventually, the woman stands up and pretends to be looking to see if the person she’s waiting for is arriving soon, and when that person does indeed arrive, the young woman departs as quickly as she can. Who can blame her? Of course, later we learn that their destination is identical and that they will have many more encounters. I’ll give you one guess what the film has in store for them.

What makes this even easier to predict is the way the young woman conducts herself wherever she goes. She smiles in the face of adversity and seems to genuinely love all that life has given her. Eventually the gloomy, impolite man from outside the store begins to see life and all its possibilities through her eyes, and he becomes a changed man. Now there’s an overused cliché in movies that dictates that whenever a film’s protagonist meets a woman with a surprisingly infectious love for life, it won’t be long before she receives some pretty depressing news from a doctor, and while Happiness does not depart from this motif completely, it does find a rather refreshing way to update it.

What distinguishes Happiness from other tear-jerkers with similar storylines, such as Sweet November and Love and Other Drugs, is that both of its lead characters as slowly dying. The man, Young-su (Jeong-min Hwang), is suffering from cirrhosis after years of overindulging in alcohol and cigarettes, and the woman, Eun-hee (Su-jeong Lim), has a debilitating lung disease that forces her to do everything slowly. In the first part of the film, we watch as they come together in a rather believable and touching way, and in the second half, we watch as their relationship tragically falls apart. The film is beautiful and thought-provoking throughout.

The film takes places in an area of the countryside where a community has been formed to help people either recover from their illnesses or live their final years in tranquility. Their days are spent surrounded by people who know what they’re going through, as well as a variety of breathtaking trees, sweet-scented flowers, and healthy plants. It is easy to see just why people would be drawn to places like this during trying times. The film also shows us some of the daily routines of the people who live there. We watch them scour the fields trying to learn the names of plants, and we observe their morning exercise, which seems to be a mixture of jogging in place and tai chi. In one scene, we are privy to the morning pep talk, which strives to make sure that every member of their community begins their day with laughter and a smile. It’s impossible not to be moved by these scenes. I asked one of my Korean students to tell me more about communities like this, and she related a short anecdote about a family member who was diagnosed with cancer and spent the remainder of her life in a community similar to the one featured in the film. The way she related it to me, it sounded as if it had provided everything it was supposed to – peace and tranquility, time to reflect, a community of supporters, and richly deserved happiness - during what was likely a very trying time.

The film wisely does not depict Young-su’s downfall as being caused by a slimy drug dealer or an uncaring fair-weather friend. Instead, his fall is the result of some of the most well-meaning people and innocuous temptations you ever see - a co-worker who offers Young-su a cigarette as a token of his appreciation, a vendor who just happens to be selling a medicinal form of alcohol, an ex-girlfriend who gives him a mobile phone so he can reconnect with the world. It’s doubtful that any of them truly understand the potential consequences of their actions or that they could have foreseen the tragic toll that Young-su’s fall from grace has on Eun-hee. How could they?

Happiness is not always an easy film to watch, yet it feels more real than many other films of its kind. The community depicted in the film is not shown as a place where miracles happen. In fact, if one comes at all, it is because the people work for it, and sometimes even that is not enough. One wonders if the film is subtly warning people about modern-day excesses and our overemphasis on material possessions and the attainment of wealth. It’s clear watching Young-su that none of these bring him happiness. Perhaps then the film is advocating a simpler life, a life in which we pursue the things that we know are good for us. Surely, happiness and love would fit this description.

If Happiness disappoints at all, it is in its adherence to film stereotypes involving sweet, dutiful women and weak men who don’t realize how good life can be until they meet the women of their dreams. I also felt slightly disappointed at the film’s rather simplistic ending. After going to such great lengths to depict just how far Young-su has fallen, the film settles for one of those moments in which everything is resolved in a split second. And while the scene indeed makes sense given what has transpired in the film, it left me wondering if we’ve become so accustomed to happy endings that we have to force them into even the saddest of situations. Perhaps filmmakers should give their audience more credit. Every once in a while, it’s acceptable to challenge the audience with an ending they had hoped would be different. Still, Happiness is a deeply involving film that will warm hearts and cause more than a few tears to flow. It’s an emotional roller coaster and a good one at that. (on DVD in Region 3)

*Happiness is in Korean with English subtitles.
Posted by Azrael Bigler at 9:00 PM

Labels: 3 and a half stars, Jin-ho Hur, reviews, South Korea