Review - A Star is Born 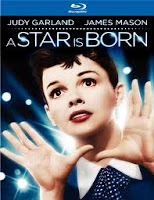 If Judy Garland had not already been a star, I have no doubt that her rendition of “The Man That Got Away” would have made her one instantly. The number serves two primary purposes. First, it enables her character, Esther Blodgett, to inadvertently display the full range of her talent to Norman Maine (James Mason), a Hollywood heavyweight with a weakness for women and alcohol. Second, by looking directly at the camera and showing off her impressive vocals, Garland is sending an equally powerful message to the audience: I’m still here, and I’ve still got it. It is a potent message from a woman whom Hollywood practically gave up on when she was just twenty-eight years old. In a way then, Norman Maine’s crazy impulse to help get Esther Blodgett established in Hollywood becomes the audience’s, for the faster he makes it happen, the sooner viewers get to be utterly amazed by Garland’s singing again, and rest assured, amazed they will be.

“The Man That Got Away” is the second musical number in George Cukor’s delightful version of A Star is Born, and both Cukor and screenwriter Moss Hart deserve a great deal of praise for being able to turn William Wellman’s 1937 drama into a fantastic musical while never losing sight of the script’s more serious elements. The film is about a young woman who rises to fame with the help of a veteran A-list actor named Norman Maine. Maine wisely never verbalizes exactly why he is as dedicated to Blodgett’s career as he is, and it is clear that his initial interest in her, indeed his very reason for seeking her out in the first place, is hardly what you would consider noble. Her interpretation of “The Man That Got Away” changes that. Later, Norman describes what he sees in Esther as “that little something extra.” The only part of the expression worth quibbling with is the word “little.”

In a very realistic twist, Esther’s career does not take off immediately. First, Norman disappears for several weeks after being whisked away to a film location in the middle of nowhere while he is sleeping off a night a prolonged drinking. Apparently, it is not the first time this has happened, and nor will it be the last. To make matters worse, Norman doesn’t know Esther’s full name and can’t remember her address. Without him to help her, Esther is once again forced to take the kind of job that many actors and actresses take while they are waiting to be discovered, one in the service industry. Esther becomes a waitress at a restaurant that looks a lot like the Mel’s Drive-Ins of yesteryear, complete with outdoor delivery. Eventually Esther and Norman are reunited, and with Norman’s help, Esther finally succeeds in getting her foot in the door. The irony is that as her career starts to grow, Norman’s begins to fade.

A Star is Born perfectly captures the times in which it takes place. We see the way the studio system worked, the importance that personal connections had for actors and actresses, and the way some actors were given new names in an effort to make them more appealing to a wider audience. We also see the grandness of 1950’s musicals, replete with colorful sets, fancy costumes, and large crowds of talented dancers whose feet move like lightening. The numbers often didn’t move the plot along, but they sure got the audiences hearts racing. The movie also honestly depicts the media’s obsession with everything Hollywood, from what actresses are wearing to the latest sensational bit of celebrity gossip, as well as Hollywood executives’ aversion to risk and controversy, especially when it comes to the behavior of studio actors and the studio’s bottom line.

The film is also filled with wonderful, memorable moments, one of the best of which involves three make-over artists trying to decide how best to “help” Esther make an impression during her screen test. We hear references to the “Crawford mouth” and the “Dietrich eyebrow,” as if having the physical features of established stars is what impresses Hollywood executives. In another great moment, Norman introduces the head of the studio to Esther in a rather indirect way and gently nudges him to give her a starring role. And then there are the priceless scenes between Garland and Mason, one of the sweetest of which involves Esther re-enacting a dance number for Norman at their home. The excitement of the characters is simply intoxicating, and the scene makes it clear just how deeply the two of them are in love. Also, watch for an amazing scene involving an orchestra, a well-placed microphone, and a playback device. It is an extremely charming moment.

If there is a part of the film that doesn’t work for me, it is the long musical number that concludes the first half of the film. In the scene, we see the performance that makes Esther a star, and while it is indeed an impressive musical number, nothing in the scene made me think that the film Esther was in was particularly memorable or interesting. In fact, I can’t really explain what that film was about or why the audience would give it a 97% approval rating after a preview screening. To me, a role that makes someone a star should be more than just a showcase of someone’s voice and fancy footwork. It should also allow the audience to see the dramatic or comic talents that the character possesses and the reason the film appeals to the audience. Also, early on, the film establishes its musical numbers as being performances set to live orchestral accompaniment, only for it later to break this pattern in a heartfelt scene in which Norman asks Esther to sing to him on their wedding night. The two of them are in a small hotel room in the middle of nowhere, and so when Esther begins singing, she does so a cappella. This is as it should be. Just where the orchestra is that suddenly begins accompanying her is a mystery. However, these are minor complaints, and they do not hurt the film in any major way.

A Star is Born is one of those rare films that is not only comic and entertaining but also tragic and thought-provoking. At one point, Norman tries to end his association with Esther, telling her that it is time for her to make it on her own. When she disagrees, he tells her, “I destroy everything I touch.” There is some truth to that statement, yet truths such as these are often pushed aside by sentimental romantic characters that often cling to the noble belief that love can solve any problem. Esther is ultimately one such romantic.

I have seen a lot of musicals over the years, but few have resonated as much as A Star is Born. In the film, Garland is simply amazing to behold. Perhaps it is what Time proclaimed it to be: “Just about the greatest one-woman show in modern film history.” However, the rest of the film’s ensemble makes it more than just a one-woman show. James Mason gives a truly heartfelt performance as a man who wants to be the best he can be but is his own worst enemy, and Charles Bickford gives a memorable performance as Oliver Niles, the head of the studio that employs Norman. One of the saddest scenes I have seen in a long time is a scene in which Oliver offers Norman a part in a movie. It is a futile effort from the start because of Norman’s unreasonably high sense of pride. Also memorable is Jack Carson as Matt Libby. Libby has the thankless job of taking care of Norman and making sure he is where he is supposed to be. Carson has a very important scene towards the end of the film that he nails perfectly. All of these performers are in the capable hands of an excellent director, George Cukor, who excelled at getting top-notch performances out of his casts. Together, they make A Star is Born one of the all-time great movie musicals. (on DVD and Blu-ray)

*A Star is Born was nominated for six Academy Awards, including Best Actor, Best Actress, and Best Original Song for “The Man That Got Away.” Like many great films, it went home empty-handed.
Posted by Azrael Bigler at 9:00 PM

Labels: 4 and a half stars, A Star is Born, George Cukor, James Mason, Judy Garland, reviews