Miscellaneous Musings - On Heaven, the Afterlife, Purgatory, and Popular Media

On Heaven, the Afterlife, Purgatory, and Popular Media 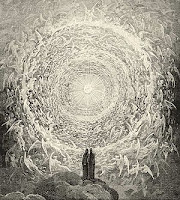 I find interpretations of what comes after death fascinating, for they represent an individual’s concept of something they will never be able to prove the accuracy of. In fact, there are hundreds of books detailing people near-death experiences, and many of them are remarkably similar. Some involve moving toward a distant light; others have to do with looking down on the world as if they are on a higher plane. In popular media, they go a step further. For example, deceased characters return, and people often walk toward incredibly bright lights. What such depictions illustrate is that what comes after life is often understandable and logical, for it follows the laws of physics and space. When they deviate from recognizable images, they often present one that few people will agree with but which most everyone will understand. For example, Homer depicted heaven, if you can call Mount Olympus that, as a physical world from which gods could peer down and observe Earth’s conflicts. They held beauty contests, attempted revolt, had affairs, and even exited and re-entered their world, although for some reason this sometimes required the use of chariots. A Righteous Brothers song imagined an afterlife in which beloved singers that have passed on form one massive band, as if all musicians do after they die is put on an eternity of performances. It is a silly concept if you think about it, but it’s easily understandable – an artist made beautiful music in life, so they’re likely making beautiful music in the afterlife. It is interesting to note that only artists are envisioned as being eternal performers. No one imagines a businessperson spending eternity making business deals or an accountant punching numbers forever. Well, not in heaven at least.

Here are some interesting ways that heaven, the afterlife, and purgatory have been portrayed in popular media.


I find some of these representations touching and others completely ludicrous. However, they all succeed in conveying to the audience what is happening on the screen. Death has come, and a character has entered a different, probably better world.
Posted by Azrael Bigler at 9:00 PM