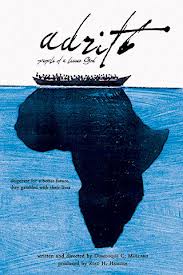 By sheer coincidence, I sat down to watch Dominique Mollard’s eye-opening documentary Adrift: People of a Lesser God in the same week that France launched a military assault in Mali and terrorists attacked an oil facility in Algeria, an event that has resulted in at least fifty-five deaths. Mollard, I suspect, is saddened but not surprised by these developments. His film is simultaneously a history lesson of France’s connection with North Africa, an indictment of official corruption and opportunism, and a harrowing journey at sea that will make viewers think twice the next time they hear about a boat full of Africans being turned back at sea.

Mollard uses the first half of his film to detail for viewers the present state of some North and West African counties. We see evidence of official involvement in human smuggling and examples of indifference to the suffering of ordinary people. Illegal activity is carried out in broad daylight, often in full view of uniformed officers, some of whom, we’re told, have amassed great wealth and shared it with their family members. Needless to say, the gap between rich and poor is a vast one. During his journey, Mollard also relates incidents of violence that he is told of, often off camera, and we get a sense of the danger that exists in this part of the world. At one point in the film, Mollard focuses his camera of a vast stretch of desert, and we understand just how easy it is for people, both businessmen and terrorists, to move around undetected.

Mollard himself never appears on screen. Instead, he focuses his lens on the people around him, many of whom are uneasy in front of the camera. Some agree to speak to him only if their identities are hidden, and what they reveal make it perfectly clear why they would insist on that. Mollard narrates the film in a calm, rather emotionless voice that will likely remind viewers of Werner Herzog, perhaps the only other director I can imagine being willing to do the things that Mollard does in the film. However, as effective and insightful as Mollard’s narration is, it is abundantly clear that Mollard, also like Herzog, is not an impartial observer. He has an obvious agenda, and his sentiments are undoubtedly on the side of the migrants. It is to his credit that he includes one or two opposing voices.

As impressive as the historical part of the film is, it is not the film’s main focus, for having established a big-picture view of this area of the world, Mollard then focuses his lens on individuals. One of the most memorable is a young twenty-three-year-old widow who is four months pregnant. We see the way her face lights up when she talks about going to Spain. We also meet a young man attempting to go to Spain for the second time despite the fact that his first attempt ending in disaster and personal tragedy. None of the people in the film are part of an illicit trade, and none of them speaks of living off of handouts from the Spanish government. Instead, many of them envision returning one day and using their newfound wealth to improve their homeland. It is a noble sentiment.

For many viewers, the most fascinating part of the film will be the final thirty minutes, during which Mollard is adrift with thirty-eight others on a tiny cramped boat that is continually leaking. It is this part of the film that I will remember most of all, for the film makes it crystal clear that this is not a journey that anyone would undertake if they felt they had any other option. It is a five-day journey – five days of seasickness, five days of worry, five days in which the specter of death and disaster is always present. And Mollard is in as much danger as the rest of them.

Adrift: People of a Lesser God is a film of enormous importance, not just for what it says about a part of the world that will be in the news for some time now, but for what it tells us about ordinary people and our own humanity. Often, people like the ones featured in the film, are reduced to numbers and talked of only in terms of how much they are affecting a government’s budget. Mollard’s film asks us to think differently. It asks us to think beyond the headlines and the numbers and to reflect upon history and our sense of humanity. It is hard to say whether change will come as a result of the film, but at the very least, the film should start an important dialogue about how best to help people whose dreams are very similar to our own. (on DVD in Region 3)

*Adrift: People of a Lesser God is in English and French with English subtitles.
Posted by Azrael Bigler at 9:00 PM