Review - Under the Hawthorn Tree 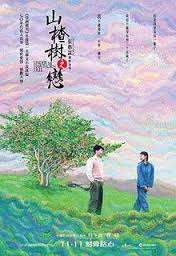 Legend has it that below a particular hawthorn tree in the Chinese countryside, several soldiers sacrificed their lives for their country. As each one was struck down, their blood seeped into the ground and was absorbed by the hawthorn tree, making the tree stronger and turning its normally white flowers a shade of red. It is a tale that is recited proudly by a young man to a group of high school seniors sent into the countryside as part of Mao’s drive to “build classrooms in the fields.”  Later, it is revealed that one of these students has been given the task of recording the tales associated with that particular hawthorn tree, which begs the question: If the legend is common knowledge, what is the point of sending someone all the way there to write it down? Of course, it is hard to make sense of much of what happened during the Cultural Revolution.

The chaos of those years provides a backdrop for the events depicted in the film, but in truth, it should be said that Zhang Yimou’s Under the Hawthorn Tree is not as overtly critical or political as his earlier masterpiece To Live. It is a story of survival during trying times and a love story set during years that were difficult for both romance and love. As we are reminded throughout the film, at that time, one misstep, one rumor, one charge of scandal or impropriety could lead to lifelong ruin.

Early in the film, Jing, the young woman writing about the hawthorn tree, is introduced to a young man named Sun, who is in the area as part of a Geological Exploration Unit. Jing first sees him from afar, and it is obvious that she is affected by him immediately. Grins keep creeping onto her face, and her eyes grow a bit wider than usual. The feelings are mutual. However, for Sun’s part, he plays it cool. He laughs, makes small talk and offers Jing and her young companion a piece of candy. She initially declines his gift, but eventually changes her mind. It is a pattern that repeats itself throughout the film, and each of Sun’s gifts brings them a little bit closer until one day they are walking hand in hand through the forest.

Under the Hawthorn Tree could easily have followed in the footsteps of Joan Chen’s heartbreaking film Xiu Xui: The Send-Down Girl, yet Zhang does not seem interested in telling that side of the sent-down girl’s experience. While there is one instance of a man wooing and abandoning a young woman after he has “succeeded” with her, this is not Jing and Sun’s story. Theirs is a story involving a mutual attraction, a budding romance, an unfortunate separation, and a brief loosening of the society-imposed restraints that seek to ensure that they do not cross particular lines. To maintain the focus on the two lead characters, Zhang employs intertitles to move from one of their meetings to the next. The technique is slightly off-putting at first, but it is ultimately the right one. In each successive scene, it is clear that they are grower closer.

Zhang Yimou is a master at making these kinds of films, and anyone who has enjoyed his early work will no doubt enjoy this one as well. It is perfectly paced, thoroughly believable throughout, and extremely touching. In fact, it may be one of the best romances in the last decade. Zhou Dongyu is a revelation as Jing. She is able to capture and express to the audience an amazing array of emotions, and she often does this sans dialogue. Shawn Dou is equally impressive as Sun, and it is easy to see how torn he is over his youthful, often conflicting emotions. He is the perfect gentleman, but we can tell that there is much he wishes to do with Jing that he must not do. In fact, his performance brought to mind Toshiro Mifune’s role as the repressed doctor in Akira Kurosawa’s underappreciated The Quiet Duel.

In another decade, Under the Hawthorn Tree would have opened in big-market cities throughout the United States simply because it bore the phrase directed by Zhang Yimou. Those days have clearly passed. According to IMDB, the film opened in China in September 2010, has been shown at several film festivals, and had brief theatrical runs in just a handful of countries in Asia and Europe. It has not opened in North America, and it not available on either DVD or Blu-ray in the United States. This is a shame, for the film is a real treasure. It is superbly directed, has a beautiful, moving script, and contains some of the sweetest characters I’ve seen in a film for quite some time. In addition, unlike many contemporary romances, there is not a single scene in the film that does not feel authentic, forced, or overly scripted. It is a film that deserves to be discovered. (on DVD in Region 3)


*Under the Hawthorn Tree is in Chinese with English subtitles.
Posted by Azrael Bigler at 9:00 PM

Labels: 4 and a half stars, China, Zhang Yimou