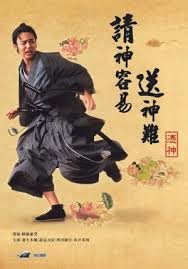 In the opening moments of The Haunted Samurai, director Yasuo Furuhata  lets the audience know just what he intends his film to be, and throughout the film, there are periodic reminders in the form of intertitles. The film begins in black and white, and in its first few seconds, one can clearly make out the tell-tale signs of wear and tear on a film reel; namely, the lightning-like creases that appear on films that have been allowed to age gracelessly. Perhaps then, Furuhata intends The Haunted Samurai to bring back the feelings of those earlier films, in which samurai were eternally loyal to their masters and masterless samurai could be counted on to do the right things in the end. If this is indeed the case, he has chosen one of the strangest plots to do this through.

The film begins in 1867, and the Shogun is in its waning years. As one character observes, what’s the use of swords when the other side has cannons? In the film opening scene, Furuhata presents viewers with a contrast between old and new. We see the film’s central character, Hikoshiro, sitting in traditional samurai attire, sword by his side, and his old friend Kamajiro, decked out in modern military attire – the formal, matching top and bottom; the Navy-blue button-down admiral’s jacket, the standard cap-like military hat. As their conversation progresses, we see that these are both decent men. Kamajiro, however, is moving up in the world; people like Hikoshiro face a very uncertain future. Some time later, Hikoshiro hears a rumor that Kamajiro may have divine intervention to thank for his newfound status, for rumor has it that he prayed at a place known as the Inari Three Circles Temple and that the god of that temple then arranged for good fortune to come his way. Not entirely believing the story, Hikoshiro nevertheless promises that he too will make the long trip to that temple. However, on his way home after an evening in which he drank way more than any samurai should, Hikoshiro stumbles upon a secluded place called the Three Cyrcles Temple (note the spelling difference), and in a drunken stupor, awakens a god. It is definitely not the one he intended to.

From here, the film is a mixture of comedy and drama, with a greater emphasis on the latter than the former. Gods comes in a way that will remind Western viewers of Charles Dickens' A Christmas Carol. However, as is normal with films from Asia, the figures in The Haunted Samurai have human forms and can be seen by practically everyone. They even have to use umbrellas to keep themselves dry during rainstorms, and they seem to love nothing more than singing, eating, and hanging around beautiful women. Most comedies involving spirits, ghosts, or gods – at least the most formulaic ones – are content to use them to create gags that end in someone screaming or shaking in a humorous way. In this regard, The Haunted Samurai is somewhat unique, for its gods are the viewers’ eyes to Hikoshima’s character, and each god that Hikoshiro encounters eventually comes to recognize a small part of what makes his character so stellar.

The conversations between Hikoshira and the entities that visit him are some of the best parts of the film. They are both surprisingly heartfelt and slapstick silly, and they reminded me of the conversations people often have with themselves whenever they see good people struggling though no fault of their own. There’s a priceless scene in which one of the gods is rendered powerless by a characters’ chanting of what appear to be Buddhist mantras, and another scene later on when Hikoshira sits down to eat with one of the gods. The god couldn’t be happier.

I suppose that if the film had maintained this storyline throughout, I would have enjoyed it a bit more. However, in its final act, it deviates from the jolly, sincere silliness of its first two acts and focuses squarely on an element of the story that has been only subtly hinted at previously. Despite Hikoshira’s good-natured personality, the love he still has for his ex-wife, and the kind of father that he wishes he could be to his son, the film begins to characterize him as a lost soul, as someone looking for a purpose in life. This storyline causes the film to veer off course and begin to resemble the kind of pre-World War II film that placed masters, officials, and members of the royal family above average people – in other words, the kind hinted at in the opening moments of the film. There may be some historical and cultural rationale for this, yet in this film it seems more tragic than honorable. It is all the more disturbing given an emotional talk that Hikoshira gives his son about the pointlessness of dying for the past. It is only natural then to ask why he seems so willing to do just that.

In the end, The Haunted Samurai is a clever, yet somewhat disappointing film, for it never seems quite sure what it wants to be. There are humorous moments and moments that are surprisingly powerful, many of which involve Hikoshira and his mother. However, the film also suffers as a result of the formula it boxes itself into. The audience knows how many entities will visit Hikoshira, and at times, it takes a bit too long to get to the next one. However, the film remains watchable throughout on the strength of its lead actor, Satoshi Tsumabuki. His face seems made for close-ups; he is just that good at conveying emotion. It is unfortunate though that his commendable work is almost undone by the film’s discomforting finale. (on DVD)

*The Haunted Samurai is in Japanese with English titles.
Posted by Azrael Bigler at 9:00 PM