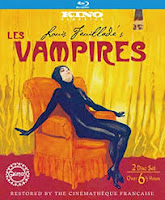 It is true what they say about the best laid plans. What started out as a one-week project, watching Louis Feuillade’s influential ten-part series Les Vampires, took twice as long. Such things happen when you have a young child who decides at ten o’clock at night that what she really wants to do is get up and play “Dinosaur Stomp” five more times on the piano. Now, there are some that would insist that a good movie will always invigorate its audience. To those who harbor such notions, I can only say that I wish that were so. Alas, heavy, exhausted eyes close whether you’re viewing a masterpiece or a piece of throwaway fluff – the difference is that is easier to justify forcing them back open when it’s the former, which thankfully Feuillade’s ambitious work is.

In Les Vampires, France is under siege by a sinister group of criminals known as The Vampires, a moniker it likely gave itself after they took to donning dark tight spandex outfits and using bats as their calling card. To me, their attire owed more to ninjas than Dracula, but that’s beside the point. Hot on their trail is not the police surprisingly but Philippe Guerande (Edouard Mathe), one of those intrepid cinematic reporters who are somehow able to get tips and put together clues far more effectively than the authorities. In the first episode, he investigates the murder of the national security agent who was leading the investigation of the Vampires and soon they come to the conclusion that he represents their biggest threat. Suffice to say, the dire warning fail to persuade him. Episode Two, “The Deadly Ring,” finds the Vampires escalating their war with Guerande: After learning from newspaper reports that Guerande is engaged to a dancer, they set their sight on her using a ring whose sharp edge has been dipped in poison. Guerande is even captured, but in a scene repeated in numerous spy films over the years, they elect to wait until later in the evening to kill him. Guess what they discover upon return to finish the job.

These early episodes also introduce the series’ requisite comic sidekick, Oscar-Cloud Mazamette (Marcel Levesque). When we first meet him, he’s stealing documents from Guerande’s desk, yet he escaped punishment by flashing Guerande a picture of his family while looking pitifully dopey. In episode two, Mazamette is revealed to be a member of the Vampires, and when asked why he whips out the same picture, to which Guerande nods empathetically before the two of them make their escape. As Bogart would say, this is the start of a beautiful friendship.

Throughout the series, the head of the Vampires constantly changes, often as a result of Guerande’s aggressive tactics and Mazamette’s dumb luck – once it’s the result of his own organization’s ineptness. Interestingly, around the middle of the series, a rival to the Vampires, a businessman named Juan-Jose Moreno (Fernand Herrmann), emerges, bringing with him focused calm and a cool, vengeful streak. Unfortunately for Guerande, the enemy of his enemy is not necessary his friend. Episode Three introduces us to Irma Vep (Musidora), the legendary villainess whose name just happens to be an anagram for vampire, begging the question: Which came first, the name or the organization?

The series has its fair share of highs and lows, and the quality varies with each episode. Irma Vep is a consistently interesting character, and Musidora plays her as a woman whose eyes shoot proverbial daggers at whomever comes between her and the completion of her mission. Her use of costumes and disguises made me think she would have fit in perfectly with the Syndicate. Feuillade wisely includes numerous close-ups of Musidora, each of which reinforce her icy viciousness and utter indifference to the suffering the Vampire’s crimes cause. It’s quite a performance.

Matching her, but in a completely different way, is Levesque, whose performance can perhaps best be appreciated by those with experience with the acting techniques employed during the early days of silent films. For example, Levesque has a habit of breaking the fourth wall by treating the camera as if it were a character witnessing the action. In one scene, he sees a character walking in a hypnotic trance and instead of following her, he looks at the camera, indicates his shock and confusion, points in the sleepwalker’s direction and then imitates her walk, just in case we didn’t understand what was going on. In another scene, while he is spying on a few nefarious characters, he turns around and wonders aloud what is going on, despite the fact that he is alone. Still, with the mannerisms of a comic great and an uncanny ability to convey emotions with his whole body, he is consistently the most interesting person on screen, much more so than Guerande, whom Mathe often plays too blandly and with far less energy – until the final episode at least. He can’t even be bothered to react emotionally to his fiancé’s murder.

Modern viewers will be familiar with all of the idiot moments that often accompany films in this genre – the let’s not kill him right away speeches, the inept lower-rung of criminals, the villain’s inevitable escape, and the organization’s peculiar habit of committing crimes in public view sans their customary criminal attire. I mean, what’s the point of having a disguise if you never wear it? And while I’m pointing out inconsistencies, what was with the head of the Vampires declaring that there was a spy in the organization, but never trying to root him out? But I digress.

Admittedly, it can be hard to judge works of the past adequately because they are viewed with an awareness of everything that came after them, and things that were novel to audiences upon a film’s initial release can seem routine and conventional now. They can also seem ludicrous, and sadly this is how I felt whenever Guerande and Mazamette were shown leading the police to the scene of the crime. Was there ever a time when authorities would allow two civilians to be directly involved in a deadly operation or be an active part in an interrogation?

The series starts slow, but hits its stride in its middle chapters. The quality tapers off slightly toward the end due to the introduction of a less than compelling villain – wait until you see his dancing in the last episode – but it ends on an exciting crowd-pleasing high note, one that allows each of our heroes a moment to shine and our lead villain the kind of exit that most actresses dream of having.

I sometimes wonder whether some movies proclaimed to be masterpieces are bequeathed that moniker as a result of their influence rather than their quality, and if someone were to call Les Vampires a masterpiece, I would present a counterargument. However, for all its absurdities and occasionally corny moments, Les Vampires deserves its reputation as a series of both significance and quality. Feuillade weaves a tale that is consistently involving, and he creates a visually stunning, stylish world, one which later directors would strive to emulate in the heyday of film noir. As David Thompson has said, The Vampires deserves to be talked about much more than it is. (on DVD and Blu-ray)

*Les Vampires is silent with English intertitles.
Posted by Azrael Bigler at 9:00 PM