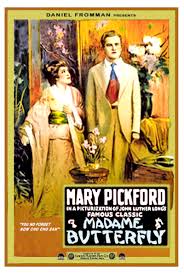 There’s a scene about a quarter of the way into Sydney Olcott’s Madame Butterfly in which a young woman named Choo-Choo San is woken up by her maid, Sazuki (Olive West). Nothing irregular there, I suppose, but observant souls will notice something rather peculiar: Choo-Choo’s hair is already neatly done, her face is powdered, and her lips appear to have red lipstick on them. Now before you say that movies have always shown the morning to be especially kind to the faces of attractive female characters, that was probably not the motivation of Olcott or anyone else involved in the filming of the scene. They simply had no choice. Imagine the scene shot differently. A maid, upon walking gently into a teenager’s room, softly tells her that the time has come to start the day. The teenager opens her eyes, stretches, and, thinking of the kind foreigner she saw the day before, smiles. And what would we, the audience, be saying? Hey, that’s Mary Pickford!

I don’t mean to suggest that when the film was released, moviegoers didn’t know beforehand who the star of the film they were about to see was. However, for Madame Butterfly to work, we have to accept what is unfolding on the screen as authentic, that the dusty rural streets that the rickshaws are going down are really in Nagasaki (It’s really Plainfield, New Jersey.), that a tea ceremony in which the bride and groom take three rapid sips of tea, is truly representative of Japanese culture, and that Choo-Choo San is really a teenager girl suddenly experiencing her first crush. Seeing the face of America’s sweetheart would ruin all of that, and so, Choo-Choo San can never be seen without make-up, not even when there’s little reason for her to be wearing it. (I suppose they could have simply hired a Japanese-American actress, but that rarely happened in early Hollywood – or in today’s Hollywood, for that matter, but that’s a topic for another day.)

Pickford made Madame Butterfly during her Paramount years, which lasted from 1914 – 1916. She was already a star by then and only made five more films with the company before expanding her resume to include producer. Clearly, she wanted more control and trusted her instincts. With Madame Butterfly, though, they failed her slightly. The story goes that Olcott had originally wanted Pickford to be reserved in her portrayal of Choo-Choo San. When Pickford refused, it is said that Olcott stormed off the set, leading Pickford to proclaim that she would direct the film herself. Olcott eventually returned and cooler heads prevailed, but it is obvious who won the clash. Pickford’s portrayal, much like Paul Muni’s in D.W. Griffith’s 1919 drama Broken Blossom, is rather Western in style – Choo-Choo is fully expressive, independent, and romantically idealistic. In the other words, Pickford plays her as if she were a twentieth-century woman instead of the late nineteenth-century teenager she is in John Luther Long’s 1898 short story.

As for the film itself, it is a bit of a mess. Its pacing is so scattered and off-putting that I’m tempted to say that Olcott was in such a hurry to be done with it that he took a pair of scissors to any scene that was either longer than two minutes or designed to develop the characters. San’s love interest, Lieutenant B.F. Pinkerton (Marshall Neilan), is such a non-entity that it’s hard to believe that San would fall so hard for him. He shows up, smiles a bit, gets annoyed at the guests who attend his wedding, looks serious as he reads a letter from his girlfriend in the U.S., and then leaves, hardly to be seen again. In between, there are one or two tender moments, but these are only loving because Pickford works overtime to make them so. There is little evidence – not in this film at least - that Neilan has a romantic bone in his body. (By the way, Neilan has a star on the Hollywood Walk of Fame, so he was clearly talented.)

Characters come and go in awkward fashion. We meet San’s parents briefly, just long enough for them to collect a handsome dowry and then disown San after her wedding party ends disastrously. There’s also a Japanese suitor (David Burton) who arrives to present himself as Pinkerton’s replacement. In Long’s version of the story, San does not refuse his offer right away, choosing instead to use it to try to make Pinkerton jealous. Here, San spikes his drink, and he leaves in a huff. Later, San comes face to face with Pickerton’s American wife. Instead of being angry at her husband for marrying, impregnating, and abandoning San, wife number two offers to adopt their child. It takes San less than thirty seconds to agree.

Obviously, Long’s version of this conversation and the events that follow it are quite different. But what seems to matter here is getting to the finale, so with the child gone, we watch San wander deliriously to the banks of a river, while intertitles proclaim what follows as a sacrifice for her child. And before you have time to wonder why she has to sacrifice for a child she has already given away, she submerges herself in the water, and the end title appears, concluding the film at the sixty-minute mark.

The film improves in the second half, and much of this has to do with Pickford’s energetic and emotional performance. Praise should also be doled out to William T. Carleton. Carlton plays the American Consul, and he is the only Western character who seems disgusted by Pinkerton cavalier attitude toward marriage and parenthood. I got the feeling that Pinkerton is not the first American he has come across who lacked a sense of honor or responsibility. Unfortunately, the latter half of the film suffers from scene after scene of San trying to locate a robin. See, Pinkerton had told her he would be back when robins returned, and instead of interpreting the remark as referring to a time of year, San…oh never mind.

The film is said to have been a box office success, and given its leading lady, I don’t doubt it. I also have no doubt that 1915 moviegoers reacted positively to Pickford’s performance. After all, they could relate to it. Pickford’s depiction of “Japanese” is purely American, requiring no understanding of Japanese culture or social mannerisms to comprehend, and it reinforces the Western notion that American men, even those who use women and then desert them, are so unique that it is better to die than move on from one. Did audiences view the film in this light in 1915? Probably not. Contemporary audiences likely will, though, and Madame Butterfly suffers as a result. (on DVD)

Posted by Azrael Bigler at 5:20 AM