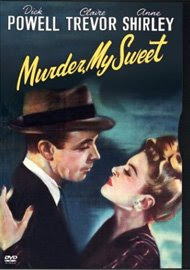 Phillp Marlow's hunches come fast and furious. One moment he's introduces a new theory, and a moment later he's shooting it down before it's even had a moment to breathe. It's simply the way his mind works. He speaks in a tongue more appropriate to a poet than a detective and seems to go through what to many would be hair-raising situations without breaking a sweat or showing a hint of emotion, and that includes fear. As the film begins, Marlow is sitting in a police station blindfolded and suspected of being involved in three deaths. The chief wants to know what happened and what his role was. Marlow, sensing that he may as well spill the beans, as he is obviously suspected of murder, then spins a complicated, fascinating, and at times, confusing tale of murder, theft, blackmail, and women.

It seems that a few days ago Marlow was fired by a slow ex-con fresh out of prison named Moose Malloy, who is determined to find the girl he loved before he went to jail. Marlow takes the case and is surprised how easy – maybe too easy - it is to find a lead or two. Later that evening he is visited by another man who also wants to hire him; this time Marlow is being asked to accompany the man to retrieve a stolen jade necklace from thieves who have offered to sell it back. Marlow is suspicious but can't refuse $100. He agrees to go along, and sure enough, things do not go the way they were supposed to. Marlow is knocked out, the man killed, the jade not retrieved. Marlow, now suspected of being involved somehow in the murder, now must solve the crime.

A less intelligent film would probably become predictable at this point, as most films that use flashbacks to unravel a mystery do. However, Murder My Sweet does not follow the usual blueprint. While Marlow knows what happened, the audience sees the story as it happened in the days that preceded Marlow's explanation to the police. They see Marlow unsure of the case and of the characters involved in it. Can he trust the blonde? Is the old man telling the truth? Are these cases connected, and if they are, how is he involved? Because Marlow doesn't have the answers to these and other questions like them, the audience doesn't either. A lesser film may have confused and frustrated the audience. Murder My Sweet will fascinate them.

If there is a weak point in the film, it is in the romance. It is simply not believable, but that is not uncommon in films of this genre. Love comes quickly in film noir, and it's perhaps best not to wonder how two characters could be in love after only a few days. However, one of the film's best moments comes during this courtship. As Marlow and Ann embrace and kiss for the first time, Marlow wonders aloud if she is involved in the murders and just trying to soften him up. Now there's one line that wouldn't earn most men a second date.

Murder My Sweet is on DVD.
Posted by Azrael Bigler at 6:59 PM