Review – When the Levees Broke: A Requiem in Four Acts 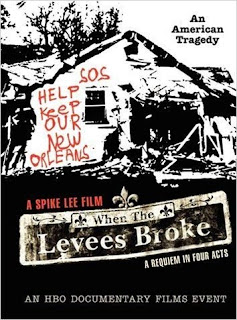 There are some films that I seem to be putting off watching. I haven’t yet convinced myself to watch D.W. Griffith’s America, and every time I get ready to watch Horror in the East, a documentary on the Japanese army’s treatment of others during World War II, I find myself putting a different movie in my DVD player. Another film that I delayed watching was Spike Lee’s documentary When the Levees Broke: A Requiem in Four Acts.

I was already in Taiwan when Hurricane Katrina hit the United States. Like many people, I assumed the residents affected by the hurricane were being taken care of, and I didn’t think much about it. Over the next few days, I was shocked by what I saw. At the same time, I never completely understood the disaster. Why had it taken five days to get water to survivors? Why weren’t people evacuated? Furthermore, where was the United States government during the crisis? I expected to find some of these answers when I watched Spike Lee’s documentary. What I found, while not answering all of those questions, was even more interesting.

When the Levees Broke: A Requiem in Four Acts is not an investigation of the government’s inaction during the hurricane. It is instead a tribute to the victims of the hurricane and the flood caused by the levee’s failure. The film tells the story of Katrina through the eyes of those who lived through it. The audience sees survivors returning to find their homes completely destroyed, they hear people describe being in the Superdome without food or water, they hear first-hand about the confusion on the ground and the dashed hopes of thousands of people waiting for assistance that was slow to come.

The film is divided into four acts. In the first act, residents of New Orleans explain why some people stayed and when they knew they were in real danger. It explains the economic situation of the residents and how many did not have the financial means to evacuate, even though they were homeowners. The viewer also discovers the different theories some residents have about why the levees broke, one of which is that the levees were intentionally blown up in order to save houses in more affluent neighborhoods. As the film explains, this theory is based on actions taken by the U.S. government in 1927, when poor neighborhoods were indeed flooded for that exact purpose.

The second act details the chaos that followed the flooding. It shows video of the people, among them a few local police officers, looting a Wal-Mart store, some for basic necessities, others for electronic equipment and DVDs. However, it also dispels many of the misconceptions that people have about what was going on in New Orleans in the days that followed the hurricane. For example, there were not violent gangs going around the city attacking women and children, as some media sources appear to have reported. While there were carjackings, most were done out of desperation, not for monetary gain. The second act also shows the slow response of the government and the arrival of General Honore, who brought supplies and helped restore order.

The third act is perhaps the toughest to watch. Residents of New Orleans explain their feeling about being called “refugees” in the media. The viewer also learns about the alarming rate of post-traumatic stress disorder among survivors and the number of residents who are not moving back. The act also looks into the pitiful educational system in New Orleans and how that leads to crime and poverty.

The last act details the months that followed Katrina. People explain how important holding Mardi Gras a year later was for them. However, those good feelings did not last. Six months after the hurricane, debris could still be seen everywhere, and many people had still been unable to get a trailer to live in. Residents were still finding dead bodies in houses that had been marked by FEMA as checked. Viewers also learn some disturbing facts about New Orleans. For example, New Orleans receives no money from oil profits even though oil is drilled just off the coast of New Orleans. Also, in order to drill oil, so many trees were cut down that nature’s natural hurricane protection disappeared. Further upsetting are the stories of people’s battles with insurance companies, which should shame everyone associated with the industry and frighten anyone thinking they are covered in a disaster.

Wynton Marsalis calls Katrina and its aftermath “a signature moment” in American history. He is correct. Hurricane Katrina showed an America unprepared and uncoordinated. It showed an America racially and economically divided. It further spread the deep distrust of the U.S. government that already existed in many impoverished neighborhoods, regardless of the skin color of their residents. Two years later, the flood water may have receded, the levees may have been rebuilt, but what Katrina unearthed will be with us for a long time. (on DVD)

When the Levees Broke: A Requiem in Four Acts was released as a three-disc set. The first two discs contain Acts I – IV. The third DVD includes a fifth act, consisting of additional testimonials from many of the people seen in the first four acts. It is equally fascinating. One of the people it elaborates on is Sean Penn, who with a small group of people, helped - and in some cases saved - about forty people. It is impossible to watch his actions without being extremely impressed and moved by the character of this man.
Posted by Azrael Bigler at 5:29 PM