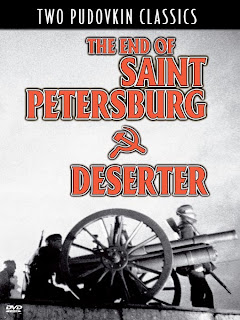 The Deserter takes place, thankfully, under circumstances that have disappeared in most countries. However, it is helpful to remember that not that long ago people who spoke of unionizing or going on strike were often met with hostility and violence. That is not to say that all strikers were standing peacefully with pickets in their hands, but there are no instances that I’m aware of of strikers buying off police or gunning down policemen with automatic weapons. There are however instances of the opposite at the beginning of the twentieth century.

It is in this now mostly unrecognizable world of corporate dominance and worker suppression that Vsevolod Pudovkin’s The Deserter takes place. In this world, companies blow whistles to summon workers and then only give a select few employment. In this world, employees unable to get work stand up before crowds and deliver either messages of caution and appeasement or calls for a general strike. The crowd, it appears, wants to hear from one particular worker, Zelle, a man who is held in high regard – that is until he tells them that a strike is counterproductive at the moment. His reasoning is interesting. A strike, he believes, would place the country at risk. Using that as motivation, he and the men of the shipyard set out to complete the massive ship they are constructing. It is only when that is finished that Zelle, both a patriot and a man of the people, advocates going on strike.

One of the strengths of The Deserter is its frank depiction of the danger and violence that often came with the act of going on strike in the beginning of the twentieth century. Police attack strikers with batons, strikers attack their attackers with fists, and strikers attempt to block strike-breakers from reaching the employment line with varying degrees of success. In addition, the film shows children being used to distribute proletariat newspapers and being chased by police for doing so. We’re reminded of other unethical practices of the time when local news media spread rumors that striking workers can be replaced by children, for according to the report one child can do the job of three adults. Throughout this, as well as the hunger and poverty that accompany the strike, Zelle makes every effort to hold together his shaky union of increasingly disenfranchised workers. Despite the energy he devotes and the resolve he encourages, workers both begin crossing and refusing to show up at the picket line. One of these workers is Karl Renn.

There is much to like about The Deserter, in particular its frank depiction of working conditions and employment practices in Germany in the first part of the twentieth century. At one point, we see an advertisement for workers. According to the ad, men over forty and women under 25 need not apply. Such frank language would be grounds for an age discrimination lawsuit if they appeared in an ad these days. These elements make The Deserter worth seeing. However, the film gets bogged down when it shifts its focus away from the strike and on to Karl Renn. Karl Renn is simply not as interesting a character as Zelle. Karl is seen sleeping, moping, and arguing, and suddenly, the audience is asked to care whether he discovers his resolve and courage or not. Furthermore, Karl does not speak Russian, and therefore, his rise to respectability in the Soviet Union and his status as a leader among Russian workers seemed far-fetched. However, his return to the picket line and the chaos that ensues is extremely powerful.

I find myself recommending half of The Deserter, but sometimes that’s not bad. (on DVD from Image-Entertainment as a double feature with The End of St. Petersburg)

*In Russian with English subtitles
Posted by Azrael Bigler at 11:06 PM