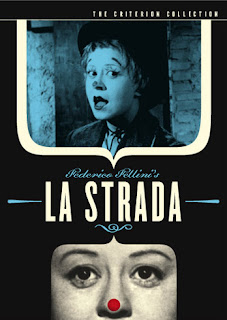 Zampano is not the kind of man that most mothers would choose as husbands for their daughters. Moody, distant, and intermittently violent, Zampano (superbly played by Anthony Quinn), a roaming circus performer, is the kind of man who answers personal questions with curt responses and resists all attempts at personal intimacy. He is the kind of man who sees nothing wrong with buying a woman, and this is exactly what he does, and not just once. In the beginning of La Strada, he buys Gelsomina, the younger sister of his former partner Rosa, after Rosa’s untimely and unexplained death. To him, Gelsomina is nothing more than a commodity, a product that he has no personal investment in. Instead, she is simply a prop, a supporting character to introduce him before he dazzles crowds with his superior physical skills. Gelsomina, on the other hand, sees the life Zampano offers her in a different light. Upon hearing that she is to go with him, she appears happy, believing that she will perform in front of large crowds, make money, and live a glorious, exciting life, the kind that she imagines Rosa had.

Gelsomina’s first clue that the wonderful life she envisioned was an illusion should have been Zampano’s living arrangements, for a wealthy, stable man does not live and sleep in a tiny camper attached to a motorbike that looks to be in need of repair. Her second clue ought to have been his method of teaching her the “proper” way to introduce him. Instead of offering her words of encouragement when she struggles to get it right, he hits her leg with a stick every time she makes what he considers to be a mistake. In spite of such signs, later we see that she has indeed begun to take a liking to Zampano, perhaps seeing him as the kind of person who is not only mysterious and misunderstood but also brilliant. In a scene in a restaurant, she even tries to copy the way he uses a toothpick. However, later in that same scene, whatever illusion she still had of him is further damaged when he leaves her on the side of the road for a one-night stand with a red-haired woman and does not return to pick her up. It is she who has to go looking for him.

Fellini’s La Strada is simultaneously the story of both unrequited love and a young woman’s mental unraveling as she is torn between her desire to escape and her attachment to a man who is clearly dangerous emotionally and physically. Add to that equation her love for the life he offers her, and it is understandable that she would feel pulled in several directions at once. Later, she meets a circus performer known only as the Fool (Richard Basehart) who seems to be unable to see Zampano without attempting to embarrass or ridicule him, a habit that carries with it a degree of peril. In a very poignant moment, the Fool tells Gelsomina that everything, from the smallest pebble to Gelsomina herself, has a purpose, even if no one knows just what that purpose is. Perhaps Gelsomina’s purpose is to take care of Zampano, for as the Fool reasons, if she doesn’t do it, who will?

Much is left unanswered in La Strada. Just who is Zampano, and what has made him the kind of person he is? Who is the Fool, and what is his history with Zampano? Most important of all is the question posed by the unseen figure of Rosa. What exactly happened to her? Fellini does not answer these questions for us, and because of that, there is a specter constantly haunting Zampano and Gelsomina. When the film reaches its tragic conclusion, we are left to wonder if Gelsomina’s fate, or for that matter, the Fool’s, mirrors that of Rosa, the unseen figure whose mysterious death set the events in La Strada in motion. And while it may be gratifying to see tears finally come to Zampano, I couldn’t help wondering whom he was crying for, the many people he has injured or himself? (on DVD from Criterion Collection)

*La Strada is in Italian with English subtitles.
Posted by Azrael Bigler at 4:47 AM

Labels: 4 and a half stars, Federico Fellini, Italian Cinema, reviews

Excellent review. This is a powerful movie, but most importantly because of the final scene. Time after time, Zampano behaves no better than an animal—in fact he makes his living showing off his supposed physical strength—and we naturally come to think this movie’s primary protagonist is the enchanting Gelsomina. But in the end, in a moment of spiritual awakening, Zampano unexpectedly (to us) recovers his humanity—and we understand this was Zampano’s story we were watching. For me, easily a 5 star classic that ranks with Fellini’s greatest.