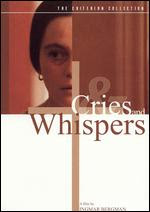 Ingmar Bergman’s Cries and Whispers begins with images of a silent but beautiful morning, yet Agnes (Harriet Andersson) cannot enjoy it. She wakes up and is instantaneously in physical pain, appearing as if on the verge of sobbing. She struggles to get up, and when she is finally able to, she peers out the window and stares out at the bright, impressive sunset outside. It does not bring a smile to her face. It seems only the sight of her sister Maria (Liv Ullman) asleep on a chair can accomplish that. The house begins to stir. Agnes’ other sister Karin (Ingrid Thulin) enters, and she, Maria, and Anna (Kari Sylwan), the maid of the manor, check up on Agnes. Later, a doctor arrives and delivers the news that her siblings have been both dreading and expecting: It won’t be long now.

What unfold next reveals an estrangement and callousness that is as shocking as it is heartbreaking. As Agnes’s condition worsens, Maria and Karin seem to be somewhat indifferent to Agnes' suffering and are therefore unable or unwilling to lift a finger to help her. Through Agnes, we learn about their mother (also played by Ullman), a woman who could be joyful one moment and angry the next, who seemed to Agnes to carry with her a depression that resembles Agnes’ own. Through flashbacks, we see what may be the effects of such a person on her children. I say may because we only see who Karin and Maria are as adults, not how they interacted with their mother throughout their lives.

Maria has become a person dependent upon physical touch and verbal intimacy. She feels the need to touch and kiss the faces of those surrounding her. It is possible that her tactile needs extends even to physical contact, for some time earlier, she had an affair with the doctor treating Agnes, an experience that exposed Maria to a psychological assault on her character. Perhaps the best evidence of just how deep Maria’s dependency goes is her husband’s action. In addition, the best example of Maria’s capacity for cruelty is her response to her husband’s plea for help. Karin is Maria’s polar opposite, fearing physical contact to such an extent that she has engaged in at least one example of self-mutilation. One half of a loveless marriage, married to a man she seems distant from, she seems to be on the verge of an emotional outburst, one that if released would likely expose those around her to a verbal assault, not gentle words of unspoken love and appreciation. And then there’s Anna, who may be the most reliable and caring person surrounding Agnes. Therefore, it is Anna that Agnes calls out for and Anna who can help Agnes fall asleep despite the fact that she is in agonizing pain. Why she chooses to do this with half of her chest exposed is never explained.

Two aspects of the film are of particular interest. The first is Bergman’s decision to use red in fade-outs and fade-ins. This creates for the audience the sense that death and the act of bleeding, both mentally and physically, are ever present in this house and in this family. The second involves an odd dream sequence in which Agnes’ ghost calls for people to hold her and stay with her. By this point in the film, its revelation that only Anna is willing to is no surprise, as the personalities of Maria, Karin, and Anna have already been well established. If a dream sequence only discloses information that the audience is already aware of, what’s the point of the scene?

Cries and Whispers is a difficult film to watch. Tragedy and cruelty are everywhere, and most of its characters appear to have no appreciation for loyalty, kindness, or friendship. In the end, it is Anna who is left with nothing, and yet can you blame her for wanting nothing from the manor itself or from Agnes’ sisters and brothers-in-law? To Anna, she has lost something more than just an employer or a job. She has lost something that trinkets or memorabilia cannot replace, something that Agnes' sisters are clearly unaware of. (on DVD from Criterion Collection)

*Cries and Whispers is in Swedish with English subtitles.
Posted by Azrael Bigler at 5:24 PM