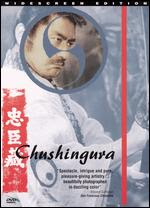 A samurai without a master was a man without a purpose. With a master, a samurai was guaranteed a place in society, a home, an income, and respect. A leaderless one had two choices: rely on the merchants, the very people the samurai had expected to both admire and fear them, for their livelihood or rent themselves out to a new master, preferably to a lord or a member of the ruling party. Neither fate was particularly desirable.

It is in this world of samurais, samurai codes of honor, and the horrible, yet respectful practice of hara-kiri that Hiroshi Inagaki’s 1962 film Chushingura takes place. The film is set in the beginning of the 18th century, a time of rampant corruption. And perhaps no one is more corrupt than Lord Kira. This is a man whose two loves are wealth and women and who fears above everything else death because it would rob him of the time he feels he deserves to pursue those two interests. He is a man who seethes with rage at the very suggestion that someone does show him the deference that he feels he deserves, and by deference, I am referring to bribes. The object of most of his scorn is a samurai named Lord Asano, who also holds the title of Head of Reception. While other lords send Lord Kira expensive goods to win his favor and further their own careers, Lord Asano refuses to bribe his way to success, reasoning that doing so would violate his family’s honor, as well as the honor and dignity that a samurai must uphold. This stance places him at odds with Kira, who would like nothing better than to humiliate and be rid of his noble adversary once and for all. Unfortunately for Asano, Lord Kira indeed gets his wish.

Chushingura is told in two parts. The first part of the film, “Blossoms,” centers around the fate of Lord Asano. He and his family are loved by the people they govern, and for good reason. He is possibly the only decent and earnest lord in Japan. After he loses his temper and attacks Lord Kira, he is ordered to commit hara-kiri, even though Lord Kira was the one who goaded Asano into assaulting him. Lord Asano’s death leaves over 50 samurai without a master, brings disgrace and a loss of prestige to his family, and puts a village into the hands of a leader who does not have the residents’ best interest in mind. The second half of Chushingura, “Snow,” details the events that follow. Just what will the Asano clan do? Will they accept a new, less prominent role in society, or will they seek revenge for the injustice that was done to their leader?

To say that Chushingura’s two halves are different would be an understatement. The first half is chiefly concerned establishing Lord Asano’s nobility and honor. The film achieves in this endeavor, and we feel genuinely sad when such a righteous man is ordered to end his own life. The movie makes this even more poignant by showing him refusing to attribute his actions to temporary insanity, a claim that if made would have removed his death sentence. The second half is less focused. The film details the actions of a number of characters, and I confess that at times I couldn’t remember who each of them was. That said, each of the characters’ stories is interesting and well told. I especially liked the role of the Chamberlain. He must weigh whether to avenge Lord Asano’s death or quietly slip into a life of farming and obscurity. The former option will most certainly bring about the deaths of all involved, even if they are successful. Choosing the other option would force him, as well as the rest of Lord Asano’s men, to spend a lifetime regretting that he had not lived up to the code he had sworn to abide by. In addition, many of the samurai have families and children, and some are just starting to discover love. Is the samurai code more important than the potential for personal happiness that love, marriage, and family offer? It is not as easy a question to answer as some samurai films have led us to believe. (on DVD from Image-Entertainment)

*Chushingura is in Japanese with English subtitles.
Posted by Azrael Bigler at 6:11 PM