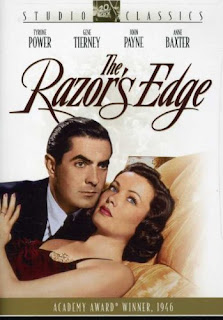 We kid ourselves with the notion that love is unconditional, when the ugly, unromantic truth is that love is always somewhat based on pre-existing circumstances and qualities. We like the way a person looks; we appreciate the way another person makes us feel. The surge in confidence we get from just one single glance can be powerful enough to convince us that the person who gave it to us is the one we will love forever. But love is a fickle thing. Add a little weight, decide to pursue a different career, dye your hair a different color, get angry more than you used to, have unexpected financial trouble, and your partner's expressions of undying love or total acceptance may not seem as heartfelt as they once had. I mention this unpopular and rather unromantic idea because I believe it can be seen in the words and deeds of one Isabel Bradley.

When we first meet her, Isabel Bradley (the always impressive Gene Tierney) is the poster child for sweetness and acceptance. She is the kind of person who befriends people wholeheartedly regardless of their social status or age. In addition, she is supportive of her fiancé as he seeks a higher purpose to his life than simply selling bonds, making money, or working in a law office. Such sentiments put him in opposition with the trends of the time, trends that emphasize material possessions and the acquisition of monetary wealth over spiritual growth. And it is because of this that Isabel's rich uncle Elliot Templeton (Clifton Webb) would prefer his niece marry a man named Gray Maturin, a wealthy man already established in the business world. As it turns out, Isabel's tolerance does indeed have limitations, and at a party, she confronts her boyfriend about his plans for the future, perhaps reasoning that she has been patient and understanding long enough. She tells him that it is a man's duty to work and that she thinks he would be proud to be part of the workforce. He insists that he hasn't decided what he wants to do with his life, and Isabel, being the sensible, understanding person that she is – or perhaps that she wants to be - decides to give him a bit more time to figure it all out.

Isabel's fiancé is a man named Larry Darrell (convincingly played by Tyrone Power), a man suffering from survivor's guilt after he was saved on the last day of the First World War only to see the man who saved him die in the attempt. This experience, coupled with his other experiences in the war, has understandably altered his perceptions of life and happiness, and he is unsure what to do with the years he has left. He knows only two things: He loves Isabel, and he wants his life to have meaning. His quest for meaning will take him to the coal mines of Europe and the mountains of India. It will also cost him his relationship with Isabel, who after seeing where Larry lives in France has finally seen enough. Explaining that she is young, wants to have fun, and is accustomed to the good life, she tells him that she could not be happy with the life he would offer her and that he is asking too much of her. Within a year, she is married to Gray Maturin (John Payne), a good man, but not one who inspires the kinds of emotional feelings that Isabel craves.

Watching The Razor's Edge, I was reminded of something the Dalai Lama said recently. He stated – and I'm paraphrasing here - that relationships hinder the search for enlightenment, for relationships require you to focus on someone else and not on your own personal and spiritual development. I could see the truth of this in Larry Darrell, for it is doubtful that he could have become the man he is at the end of the film if he had gotten married and begun working in an office. It is also telling to see the person that Isabel has become after placing so much emphasis on her own material gain and the preservation of her affluent lifestyle. The changes she has undergone are evident in her treatment of her childhood friend Sophie MacDonald (Anne Baxter). Whereas she was once supportive and kind to her, the latter half of the film sees Isabel plotting her downfall just to prevent her from marrying Larry, whom she still wants for herself. This is a far cry from the sweet, understanding woman who sacrificed her own happiness to allow Larry the time he needed to find his purpose in life.

Much of The Razor's Edge still resonates today. Many people will likely see part of themselves in the character of Larry Darrell, as the pursuit of intellectual and spiritual enlightenment continues to collide with the pursuit of financial gain. As for Isabel, it is hard to like her by the end of the film. Surprisingly, I was still able understand her, even when she began to commit unforgivable acts, for the force driving her is not revenge or hatred. Instead it is regret, regret that she gave up the man she loves, regret that the life she thought she'd have by doing so did not materialize, regret that her conscience had not permitted her to follow through on the single act of deceit that might have won her the man of her dreams on her terms. And yet by the end of the film, it is not Larry that society holds up as the model of an American hero. No, he fades into the shadows, leaving rich businessmen and influential political leaders as the heroes and icons of the day. Appreciation for the mind and soul will simply have to wait. The Razor's Edge is a fascinating, thought-provoking film that contains elements of tragedy, and time has not aged it one bit. (on DVD)