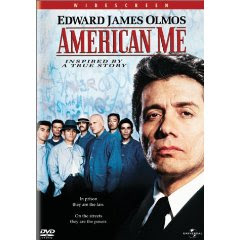 In the quest to label things as either good or evil, it is sometime forgotten that gangs, something society for the most parts now associates with murder, turf wars, and drug dealing among other things, started out representing rather noble intentions: the creation of a community, the attainment of respect, and protection from those who preyed on those perceived to be weak. Just as families in China often created a larger family by having their children call their neighbors and co-workers “auntie” and “uncle,” gangs at one time sought to create families and earn respect for the children of absent, abusive, or unqualified parents. Just when the line separating these intentions and the violent pursuit of money and power was crossed, I’m not sure, but it is doubtful that it was greeted with thunderous applause from those first gang members.

The central character in Edward James Olmos’s 1992 film American Me Montoya Santana (played by Olmos himself) seems to me to be from the second generation of gangsters, the one that knew what they were getting into when they were initiated into a gang. We see that at that time the initiation process was simply having the gang’s insignia tattooed between your thumb and index finger; it is much different today. Santana, we’re told at the beginning of the film, is two people. First, there’s the Santana who trips over his own feet while dancing for the first time, the Santana who looks at under-aged children drinking in the afternoon and worries for their future. And then there’s the other Santana, the one who orders murders, the one quite willing to sell drugs to the very children he is concerned about. It is a divergence that Santana readily admits. As he explains it, the former was born when he set eyes on his first love, Julia (Evalina Fernandez), the latter at a tattoo parlor on the night of the Zoot Suit riots in 1943.

Sixteen years later, Santana is already well-known on the streets in his community. One evening, he and his two best friends, J.D. and Mundo, decide to demonstrate their fearlessness by taking a “short cut.” It is clear from Mundo’s expression that the path indicated is not a secure one. Soon, they find themselves fleeing from a rival gang known as Hazard. In an attempt to hide, they break into a diner, where things go terribly wrong. A glass door is shattered, a gun is fired, and three young men not even of legal age find themselves in juvenile hall. It is there that Santana will make a name for himself as the leader of the Mexican Mafia.

Throughout the first half of the film, American Me is fascinating. We see Santana rise in power and witness the moral decline that coincides with such an ascent. This ascent is later threatened by a rival gang known as Nuestro Familia. This presents Santana with a dilemma, for while taking out his rival gang’s leader might earn him the respect of his Italian and African-American inmates, it would almost certainly start a war between members of the same community. The second half of the film sees Santana released from prison after eighteen years and attempting to run the drug trade from the outside. At a party, he meets Julie and cannot take his eyes off of her. And thus, in true Hollywood fashion, begins the relationship that changes him.

The problem is that the relationship gets very little screen time, and because of that, it’s difficult to completely accept the changes that occur within Santana or the affect that Santana has on Julie. Instead, we’re asked to see Santana as a sort of principled criminal the kind that has no problem ordering executions as long as they are conducted properly. At one point in the film, he criticizes J.D.’s actions because what should have been personal – a murder – has now become racial. The remark prompts J.D. to say that Santana is losing his edge. And perhaps he is. Love, it seems, is making him question what drugs and gangsters are doing to the community that he thought he was serving when he was initiated so many years ago.

American Me is a strong film, yet one that I felt should have been longer. Events happen too quickly in the second half of the film, and their repercussion are not fully explained. In addition, Santana’s changes remain somewhat unexplained. He’s certainly not a nice guy, but the film seems to be trying to get viewers to feel something positive for him, a sentiment I simply didn’t have. Perhaps screenwriters Floyd Martux and Desmond Nakano felt the need to humanize Santana, much in the way that The Godfather successfully humanizes Don Vito Corleone by having him put a grapefruit in his mouth and play with his grandson. However, in American Me, the effort seems rushed and incomplete, and because of that, it is somewhat unsuccessful. I suppose though that the same could be said about Santana’s life in general, for by the end of the film, even he admits that whatever pride and honor he and his childhood friends had had, they gave away long ago. As American Me sadly demonstrates in its final moments, recovering them remains an uphill battle. (on DVD)

*American Me is in English and Spanish with occasional English subtitles.
*It has several moment of extremely graphic violence.
Posted by Azrael Bigler at 8:47 AM