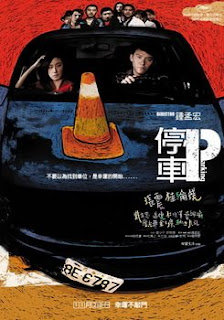 Parking opens with a shot of a man (Chang Chen) sleeping in his car along the side of a road. He is suddenly awakened by the unmelodious sounds of his cell phone going off, for his wife has just now noticed that the man did not return home the previous night. There may not be any way to spin this moment in their relationship. I suppose it’s possible that such obliviousness is natural, the normal by-product of a double-income family trying so hard to make ends meet that it not uncommon for one of them to come home at a rather ungodly hour. However, as I watched the scene unfold, I had the notion that there was more going on than what is immediately apparent. Happily-married men who find themselves in such a situation smile when they talk to their wives; they assure them that they are well in a voice so sweet and tender that it simultaneously conveys both an apology and a reassurance of their own security. The man’s words do not reflect these emotions, nor do they convey any harshness, I might add. It’s as if all of his feelings have left him and he has nothing left to give.

We learn that the man and his wife have a date planned for that evening, which is a little peculiar, for as Billy Crystal said in When Harry Met Sally, the last thing a man wants to do is date his own wife. The man is given what seems like a simple task: to pick up some cake for later. It’s so simple in fact that logically he should be in and out in no time. Fate however has a funny way of making even the easiest of undertakings difficult, for after purchasing the desired desserts, he returns to his car only to find it blocked by someone illegally double-parking. What follows is a descent into a part of the world that few relish being a part of. It is the world of pimps and prostitutes, gangsters and hoodlums, of those who have lost hope and of those barely clinging on to it.

In this world, we meet an elderly man and his blind wife, two people who for six years have apparently been waiting for their long-lost son to return. For little Nini (Kai Jung Lin), the couple’s granddaughter, those years have been even more excruciating. In addition, we meet Lee Wei (Peggy Tseng), a beautiful young woman from China who had come to Taiwan with romantic visions of a better life, only to be forced to work in the most degrading of professions for one of the most immoral of men (Leon Dai). The area that the lead character finds himself in is also home to a barber (Jack Kao) who is the kind of man who opens his business just so that he can serve one of oldest customers and a tailor (Chapman To) who failed at his father’s business and now finds himself in debt and hiding in the shadows. As night falls and the darkness sets in, the area, which was already half-empty to begin with, becomes the location of secret rendezvous, illicit business transactions, and a steadily increasing level of violence.

One of the reasons that Parking works so well is that it is incredibly successful at making the audience care about its characters. Simply put, as the movie progresses we want these characters to find a way out of the precarious situations they has found themselves in. The movie makes us feel this way by revealing small but pertinent details about many of the film’s more sympathetic characters. We see the tailor in what to some would have seemed like better days, but to him felt like being incarcerated. We see Lee Wei speaking with such innocence about what Taiwan will be like for her. And we hear the words of the unseen but ever-present Little Ma, a man whose actions six years earlier had the unintended affect of leaving Nini and her grandparents to fend for themselves. And yet many of the details concerning the film’s central character remain a mystery until the film’s last act, an act which takes us back in time a day to a doctor’s office. There, words that are probably best left unsaid are said in the most hurtful of tones to the two people most vulnerable to such words. The damage, however inadvertent, is done, and whether their marriage can survive now depends on whether the man makes it through his long and perilous evening.

Parking is one of those rare films that pulls you in and doesn’t let go, and as I watched it, I knew I was observing something unique. That the film is director Mong-Hong Chung’s first makes it even more astonishing. We may be witnessing the beginning of an amazing career. In addition, the performances in the film are all top-notch. I especially like the portrayal of the barber and the blind woman. Her reaction when she hears her son’s letter read aloud is heartbreaking. I also liked Lun-Mei Kwai’s brief appearance as the man’s wife. In only a few moments, she was able to make all of the man’s earlier actions completely understandable, and she is an actress I hope to see more of in the future. The end of the film finds some characters heading toward better yet uncertain futures; others though seem stuck in place. If you couldn’t tell, I was trying to throw in a reference to the title just them, but I couldn’t find one that worked well. No matter. I’ll let the film speak for itself on that one. (on DVD in Region 3)

*Parking is in Mandarin with English subtitles.
Posted by Azrael Bigler at 5:49 PM