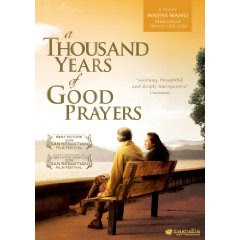 Wayne Wang’s excellent, well-acted film A Thousand Years of Good Prayers begins with a moment that may reveal more in a glance than many other films do in a five-minute scene. I say “may” because there could be a much more innocent explanation. The moment centers upon a man named Mr. Shi (Henry O) taking his first steps in a long time – if not for the first time in his life - on American soil. As he steps out of the arrival gate, his face does not display even the slightest hint that he recognizes any of the people waiting for loved ones at the terminal. It’s surprising, for one of them calls him “Ba,” the Chinese word for “father.” Mr. Shi, reflecting a combination of both relief and joy, remarks that she looks just as she did when he last saw her twelve years ago. “Impossible,” she replies. It will not be the first time she rejects Mr. Shi’s words. The woman is Mr. Shi’s daughter Yilan (Feihong Yu), and this moment marks the beginning of not only a reunion but also a somewhat failed reconciliation.

In Yilan, Mr. Shi sees a forlorn soul, a lonely, single woman lost in life and in need of guidance. Mr. Shi is happy to offer her that, so he brings up the value of having children and being a parent, as if bringing life into the world is the solution to what he views as his daughter’s feelings of solitude. Yilan, for her part, sees her life as satisfactory, perhaps even wonderful. We may come to a different opinion after seeing all of the events that transpire, but then again we are only seeing her life after the arrival of her father, a man whom she feels obligated to talk to and be respectful towards but in reality has very little emotional connection to. She sees a kind of selfishness behind her father’s comments about parenthood, regardless of her father’s intent. “You think becoming a grandfather will redeem you,” she tells him during one emotional discussion. Soon after that, she tells him she is going out with friends. It’s a lie. She simply feels the need to get away from him. Unfortunately, this need only grows as time goes by, and soon Yilan not so subtly suggests her father explore America without her.

A Thousand Years of Good Prayers relies a great deal on imagery and symbolism. Through these devices, we learn things about the characters that they themselves do not reveal directly. For instance, to mark his luggage, Mr. Shi uses a Red Guard scarf, a remnant of a chaotic time that is never far from his memory. We see Mr. Shi cook dinner for Yilan, only for her not to eat it, an act that many would regard as disrespectful. When Yilan receives a phone call, she leaves the dinner table and walks into her room to converse with the person on the other line. She doesn’t mention who it was. It is clear that Mr. Shi’s role in Yilan’s life does not extend very far. Despite what may be considered impolite actions on Yilan’s part, the film does not make either Yilan or her father out to be completely right or wrong. To do so would be disingenuous, for these are characters that have some pretty serious issues, ones that the film rightly does not pretend can be resolved in just under an hour and a half.

One of the things I like about the film is that Mr. Shi is not presented as someone who wallows in his own despair. Instead, he is a character that is completely comfortable on his own. He accepts that his daughter has to work, and in her absence he reads, goes out to buy groceries, has brief conversations with neighbors, and takes walks in the local park. It is there that he forms an interesting friendship with an Iranian woman he only knows as Madame (Vida Ghahremani). Their conversations are a combination of short instances of broken English interrupted by longer moments of Farsi and Mandarin. These moments are not subtitled, and we understand only what these two characters understand. From their conversations, we learn a great deal of general information, their feelings about their children, their hopes for the future, and their professional lives. The two of them form such a bond that Madame reveals a personal tragedy to Mr. Shi. In fact, Madame seems like such a good woman that we, like Mr. Shi, are stunned to hear what has happened to her by the end of the film and why. It simply doesn’t gel with the person that we have seen sitting in the park with Mr. Shi.

And perhaps that’s the point: that we don’t know the people that walk with us through life. Do we believe what they tell us, or do we believe the whispers and innuendos that are said behind our backs? Do we believe that the people who are supposed to love us have our best interests in mind, or do we believe that they have ulterior motives and are only using us to live our their own failed dreams? As the film demonstrates, once unbound, such feelings of mistrust can create an almost impregnable wall between people. That may indeed be the case for Mr. Shi and his daughter. However, I choose to see A Thousand Years of Good Prayers as the beginning of a possible reconciliation. I simply can’t imagine that Mr. Shi will ever stop trying to find the right words, and it that’s true, then there’s hope for the two of them in the end. (on DVD)

*A Thousand Years of Good Prayers is in Mandarin, English, and Farsi with English subtitles.
Posted by Azrael Bigler at 8:19 AM