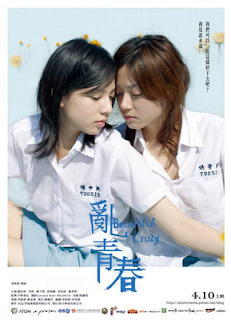 Chi Y. Lee’s film Beautiful Crazy is the kind of movie that will make your head spin. Moments of complete clarity are hard to find, and often viewers will not understand the significance of a look, a memory, and an awkward conversation until much later in the film, if even then. It’s a film that is presented in pieces, and in many ways it’s up to viewers to piece the film together using at times barely visible threads that may or may not have an exact order. For some viewers, the film will therefore seem a mess, an ill-fated effort at being both avant-garde and culturally hip simultaneously. Others will likely gladly accept the film’s challenge - to unscramble the memories of three somewhat shattered characters into a coherent tale of teenage love, angst, and betrayal. To those of you who choose the latter, I offer my congratulations and sympathy, not because you’re likely to be disappointed - although some of you no doubt will be - but because I know from experience just how daunting the task before you is. As I watched the film, there were many instances of unadulterated clarity, occasions when I was certain I’d just had one of those “A-ha!” moments, only for the following scene to cause me to question what just seconds earlier I had been so sure of.

Beautiful Crazy is the story of four people whose lives intertwine intermittently for a couple of years. The film begins with two young women sitting at a kitchen table. One, Xiao-bu (Amiya Lee), recounts the last moments of her acquaintance with her long-time friend and classmate Angel (Angel Yao). They were neither pleasant nor peaceful, for they included both hard slaps and shoves. The conflict had ended with one of them in tears after being thrown to the muddy, wet ground as it was raining - all seemingly over a cigarette.

At the table with Xiao-bu at the beginning of the film is Ah Mi (Chien-hui Liao), an apparently naïve young woman who may or may not have a curious attachment to her roommate. Does she want to be Xiao-bu? It’s possible. She does dress in her clothes, use her make-up, and listen to what she says rather intimately as if trying to pick up some any of Xiao-bu habits that had previously gone unnoticed. Perhaps she wants to be with Xiao-bu. She does seem to be happiest when she and Xiao-bu are sitting on a train together, and Xiao-bu’s head is lying on her left shoulder. However, the film does not provide a concrete explanation for this, nor for that matter does it clearly explain Angel’s wishes regarding Xiao-bu. As for those two, they seem to get along well enough. We see them meeting secretly in an underground area that is illuminated by candles and having a good time dancing together to rock music that may be only in their heads. Strangely, we don’t see much in the way of heart-to-heart conversations, which may be the reason Xiao-bu has a hard time putting into words exactly what made them such good friends. When asked, she reduces her friendship with Angel to the fact that they may have been the only girls in their class that smoked. Whatever the real reason is, Xiao-bu can’t seem to put in into words, and therefore, we never discover it.

We’re later introduced to a young man who years earlier had tried to win the heart of the one he loved, only to be rejected by the object of his desire, a rather timid, apologetic Ah Mi. Years later, free of the school uniform that he was forced to wear and the school boy looks that so many high school boys have and curse themselves for having, he happens upon Xiao-bu on a day when she has suddenly fallen ill. He takes her back to his apartment, and there he takes care of her in a way that suggests a high degree of moral upbringing. Soon, the two begin dating. As we learn more of the emotional baggage that Angel left Xiao-bu to deal with, we understand the pain that she feels as her friendship with Ah Mi and her relationship with her boyfriend seem to be falling apart simultaneously. And yet there’s more. There’s also an older man who apparently takes up with prostitutes and has something to do with two of the film’s main female characters. Interestingly, he is well aware of his shortcomings. Then there’s Angel's father, a heavy set man who sits in his underwear drinking, smoking, and staring outside through a window all day. Just how long he has been like that is a mystery, but it’s easy to see why Angel would feel that getting out and being with friends was a necessity.

And yet if that is true, then what are we to make of the film’s most shocking scene? It is certainly not an act of romance, for Angel’s action is neither sweetly prefaced nor gently executed. There are no sweet words to accompany it, and Angel does not seem the least bit remorseful for her decision, despite the shocked expression on Xiao-bu’s face immediately after it is done. One could read Angel’s reaction as being cold and calculated, intended to inflict harm, and yet this explanation does not gel with anything that precedes it or follows it. I suspect it has something to do with her need for affection, since she does not get any at home, but that’s merely speculation on my part. The only one that could explain it to us is Angel herself, and she remains tight-lipped.

Much of the film’s complexity has to do with the way the film is constructed – or perhaps I should say “deconstructed.” While films like 21 Grams, Memento, and In the Mood for Love have played with time and perceptions of reality, Beautiful Crazy adds an entire new layer to this concept. In Lee’s film, when memories come to a character, they appear as snapshots, quick images that have the power to shock and startle, but oftentimes last no more than a few seconds. For example, in one scene Ah Mi shows Xiao-bu an undergarment that she has borrowed from her. The sight of the undergarment causes a immediate flashback in Xiao-bu’s mind of the day underground she spend with Angel, and we briefly see Xiao-bu standing in front of Angel giving her what sounds like an ultimatum. The movie quickly cuts away, and it is not until later that we see what led to Ah Mi revealing the undergarment and not until even later that we see understand the importance of the scene in the underground. In fact, throughout the film Lee seems to be suggesting that memories do not come to us in linear order, but rather they appear in our minds like fleeting flashes of light, coming to us all at once and disappearing a split second later. Only later, upon willful reflection, do we remember the details that make up those flashes of memory. And so as viewers we see scattered pieces of the story, some that indeed make sense, but others that cause us to doubt all of the assumptions we have made about the film and its characters.

In the end, Beautiful Crazy works so long as we care to unravel the disjoined events that are placed before us. I suspect that some, frustrated by the film’s frequent breaking of traditional narrative structures in film, will simply not care to. However, as I watched the film, I found myself intrigued by the picture that slowly emerged of these characters, and as the film neared its end, I indeed cared about these characters, even the ones that the film could easily have cast as villains. In addition, the film takes simple sentences such as “I’m coming” “I’m leaving” and “Can you take me out for ice cream?” and turns them in pleas for love and assistance, pleas that unfortunately fall on deaf ears. In fact, one look at Angel is to know that not everyone should be a father and that not every emotional wound heals enough for the scars to completely fade away. And sometimes, the ones we love the most, the ones we most need to accept us and tell us that their love is truly unconditional, are the ones we end up hurting. It’s not easy to watch, but in the hands of Chi Y. Lee, it is both fascinating and frustrating to see. (on DVD in Region 3)

I saw the movie yesterday. What a crazy movie! I don't know what its significance is. BTW, thank you for lending those comedy movies. I really need something which can make mw laugh. I am completely weighed down by the stress of TOEFL, and even don't have leisure activities. Thanks a lot.