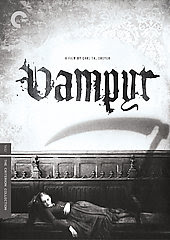 There’s a moment in Carl Theodor Dreyer’s Vampyr when, for reasons not fully explained, a man falls asleep on a bench. There’s nothing peculiar about that per se; however, moments later, we see the figure on the bench lean slightly to his left, while a second version of the man – perhaps his shadow or a version of himself that can leave his body when he meditates, like Marvel Comics' Dr. Strange – stands up and walks off to the right. This “shadow self” continues in the direction that the man had been going on before he grew tired and split in two. Later as the man ducks behind objects and sneaks around an inn where strange things have been occurring all day, we see that a coffin is being readied for burial. This in itself is nothing to send shivers down one’s spine, and yet it does, for the body inside the casket is that of the very man who is at that moment both napping on the bench and playing detective. There are now three versions of one character. How can this be? And what does it all mean? I wish I could tell you, but I’m at a loss myself even after seeing the movie.

The man’s name is Allan Grey (Julian West), and in a span of one day, he will see more than most of us see in a lifetime. From the somber and mysterious figure carrying something that resembles Death’s scythe to the odd shadows that have a mind of their own and often leave the presence of the bodies they are supposed to be attached to, Grey has every reason to be afraid, and yet he responds to everything that is thrown at him with an odd expression of curiosity and hesitancy. I imagine if someone began opening the locked door to my room from the outside, I would start screaming or dial 911. Grey, in contrast, just pulls his blankets toward him slightly, half afraid of what is coming in and half intrigued at the prospect of seeing just who or what will enter. Grey’s late night visitor turns out to be a man (Maurice Schultz), possibly middle-aged, who speaks somewhat cryptically. He seems nervous about being overheard and delivers a rather odd message – that she must not die! The visitor then writes the words “To be opened upon my death” on a small package and departs, leaving the package on the desk in the room. Young Allan Grey, with his fascination with the dark and the unexplained, simply cannot resist heeding a “call of distress.”

Grey’s journey takes place in the darkest of locales. First, there’s the inn he stays at, a narrow shadowy building where people can be heard but not seen, where noisy occupants with horribly disfigured faces reside, and where the only hint that someone is following him is that a strange shadow appears to be keeping step with him on the opposite side of the river outside the inn. In other places around the inn, he can hear the barking and howling of dogs, yet the dogs themselves are nowhere to be seen, and at the mysterious visitor’s residence, Grey discovers that death seems to be stalking a young woman named Jeanne, who for most of the film lies in bed gravely ill. This severity of her condition, however, does not prevent her from sitting up straight and shouting, “The blood! The blood!” One wonders if she is referencing a blood transfusion or inferring an extremely unnatural and macabre hunger.

Like many of Dreyer’s other films, Vampyr is visually stunning. From the look and feel of the old inn to the dancing shadows that seem oblivious to the world around them to the dark, foreboding forest that danger can easily be lurking in, everything viewers see in the film helps draw them into the story. It matters little that certain parts of the film are never explained or that long-protected secrets are discovered so easily that one would be quite justified in wondering why no one had been able to solve the problem sooner. What does matter is that the film succeeds in creating a tense atmosphere, one in seemingly innocent people could be up to no good and time is definitely not on the hero’s side. In other films, a patient has no time to spare, and the hero must act quickly; in Vampyr, it’s more complicated. A patient must be kept alive until sunrise, and so a hero must at the very least keep evil at bay for several hours.

Vampyr is both fascinating and puzzling, yet in a good way. Not everything is explained, but perhaps things do not need to be in a film involving the supernatural so long as all of the events make sense in the context of the film. In Vampyr, even elements that are unexplained seem possible in the world that the film takes place in, and so they must simply be accepted. I also liked how Grey moves from being an observer of the events unfolding around him to taking part in the action, as if he has suddenly found his true calling. In a supporting role, Jan Hieronimko, who bears an uncanny resemblance at times to Mark Twain, is perfectly menacing as a strange village doctor who only goes out at night, and Henriette Gerard gives a subtle but affective performance in the role of a reclusive woman who secretly lives at the hotel and wanders the forest at night with something other than noble intentions on her mind. Vampyr, Dreyer’s follow-up to his masterpiece, The Passion of Joan of Arc, is further proof of Dreyer’s genius, and it remains an extremely strong and impressive film. (on DVD from the Criterion Collection and Image-Entertainment)

*Vampyr is in German with English subtitles.
Posted by Azrael Bigler at 7:27 AM