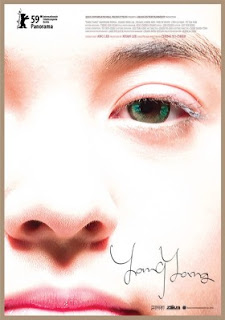 In the opening scene of Cheng Yu-Chieh’s poignant and well-acted film Yang Yang, a guest at a wedding innocently remarks that Zhang Xinyang (Sandrine Pinna), also known as Yang Yang, looks like a foreigner. There does not appear to be any malicious intent behind the remark, and Yang Yang does not appear insulted or shocked by it, perhaps indicating that this is not the first time that someone has said this to her. She simply smiles and explains that she is half French. If there’s anger behind her wide joyful smile, it isn’t obvious. However, later in the film, we see that Yang Yang is in the habit of hiding undesirable feelings and experiences behind smiles and half-hearted laughter. It must sting to be seen as an outsider in the only country she has ever called home.

The truth is that Yang Yang has never seen her father and does not speak French at all. Moreover, she was born in Taiwan, considers herself Taiwanese, and speaks fluent Mandarin. However, it is her Eurasian features that some people fixate on and draw conclusions from. Yang Yang’s step-sister, Xiao-Ru (Her Sy-huoy), uses them against her when she wants to hurt her; at other times, men who may otherwise have not paid much attention to her at all throw a bit too much of it in her direction, and not all of this attention is the kind she should be flattered by. For example, a stranger videotapes her at track practice, a director makes the erroneous assumption that she is European and can therefore speak perfect French, and a producer has more on his mind than just whether she’s right for a role in a film.

In the film, Yang Yang’s life is turned upside down by a picture hanging on a wall in a hallway of a local hospital. The picture is of her competing in a race, and the name of the photographer that took the picture is European. What does it mean? Could it be that the photographer is her long-lost father? Yang Yang doesn’t particularly care to find out, yet the picture causes her to experience a flood of strong emotions, and when Shawn (Bryant Chang), the young man who accompanied her to the hospital, tries to comfort her, they end up kissing. Normally this would not be a problem, except for the fact that Shawn is Xiao-Ru’s boyfriend. Shawn tells Yang Yang that he loves her and offers to break up with Xiao-Ru; to her credit, Yang Yang talks him out of it. Except that’s not the end of it. How can it be, for feelings as intense as theirs are can rarely just be swept under the rug and ignored? Soon it is Yang Yang’s turn to propose something not exactly proper – three hours with no inhibitions, three hours during which it will be as if they are different people. Simply put, whatever they do never happened. It’s easier said than done.

As Yang Yang deals with the repercussions of her decision, the film turns slowly from teen drama to a look at mistaken impressions. We learn that the man who videotaped her (Huang Chien-wei) at track practice is a decent and honorable man, that Shawn is not as stable as he first appears, and that to Xiao-Ru, keeping Shawn is a kind of victory in itself, even though maintaining that victory seems to be causing her nothing but stress and heartache. Betrayals occur, and dreams are shattered, only to be attempted again later on to no avail. And as art begins to imitate life, Yang Yang must face her own feelings about the father she’ll likely never know. “I wouldn’t go looking for him,” she later tells her director. The remark is both sad and courageous simultaneously.

In an odd coincidence, this week CNN reported on an American Idol-like television show in China. One of the contestants was a young woman of Chinese and African parents. The young woman made it far in the competition, but tragically found herself the subject of some of the vile online comments one could imagine. One comment even suggested that she should never have been born. Such comments are unfortunately all too common on the internet these days due to the sense of empowerment that perfect anonymity affords people. In Cheng’s film, Yang Yang is spared such harsh comments, but we get the feeling that her isolation is only going to grow with age, for even in the 21st century, we live in a world in which too many people still sees things as black and white or use versus them. Perhaps that realization is behind her remarkable smile at the end of the film. (on DVD in Region 3)

*Yang Yang is in Mandarin with English subtitles.
Posted by Azrael Bigler at 8:05 AM

Labels: 3 and a half stars, reviews, Sandrine Pinna, Taiwan