Review – Man Without a Star 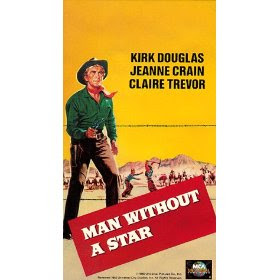 Looking at King Vidor’s film Man Without a Star through contemporary eyes, one could easily mistake it as a metaphor for today’s corporate world. You have the small ranchers trying their hardest to eke out a living, while those with the majority of the money and cattle blatantly take advantage of their privileged status. Their herds take up most of the land and eat most of the natural resources other cattle need to survive, and because they exist in such large numbers, it’s likely their owner controls the market. When ranch hands speak up for the men whose livelihoods are being threatened as a result of the sheer number of cattle, they are quickly demoted or fired. And when the smaller ranchers do something slightly unorthodox in an effort to ensure their survival, those with the means to do so recruit hired guns to put their competitors back in their place. It’s almost as if small business’s struggle against megastores were being played out in the Wild West.

Man Without a Star is about a wandering cowboy named Dempsey Rae (Kirk Douglas). The beginning of the film finds him asleep on a patch of hay in a boxcar bound for Wyoming. Outside train employees meticulously search for stowaways and when they find them seem to have no qualms about simply leaving them to fend for themselves in the middle of the scorching desert. One young man who finds himself facing this perilous situation is Jim Jimson (William Campbell), and it only because of Dempsey’s quick reflexes that Jim averts such a fate. The two of them soon form an interesting partnership – Dempsey playing the role of the seasoned veteran showing a rookie the ropes, and Jim in the role of the inexperienced young man who has much to learn about both himself and the world at large. To Jim, the world is a place to prove one’s manhood – even if that means continuously picking the wrong fight with the wrong man.

Dempsey and Jim eventually wind up employees of Strap Davis (Jay C. Flippen), the foreman of an extremely wealthy rancher who impresses Dempsey immediately despite the fact that the two of them have never actually met. This is because the rancher’s luxury home has something Dempsey is amazed at the possibility of – an indoor bathroom. When one rancher wonders aloud why someone would want such a device, Dempsey innocently remarks that it could come in “mighty handy on rainy nights.” Eventually, Dempsey meets the owner of the mansion with the indoor plumbing and is instantly taken aback, for not only is she a woman – and a very attractive one at that – but she is also incredibly ruthless. To her, profit comes first, and if she has to hire violent thugs to ensure that she makes the most money possible, she’s quite willing to do so. It’s a situation that Dempsey has unfortunately seen before, and quite frankly, one that he has not wished to see again.

Much of Man Without a Star has to do with Dempsey’s attempts to teach Jim the unwritten traditions of the West. Throughout the film, we see Dempsey imparting time-tested wisdom, as well as teaching Jim how to shoot, how to disembark his horse the right way, and how to ensure that one is properly ready for work the next day. He accomplishes this last one by making sure that all Jim drinks is Sarsaparilla. “Stay away from whiskey,” Dempsey explains, “and you’ll have no regrets in the morning.” It’s a piece of advice that Dempsey never takes himself. However, even as Dempsey seeks to steer Jim in the right direction, it’s clear that popular notions of the cowboy being quick to defend his own honor, never backing down from a challenge, and needing to be victorious in gun duels never completely fade from Jim’s mind, leaving him easy prey for those that would seek to make those qualities seem honorable just to make Jim part of an ever-escalating range war.

Man Without a Star is strongest when it focuses on this storyline. It is weakest when it turns its attention to the relationship between Dempsey and his boss Reed Bowman (Jeanne Crain). We’re told that Dempsey is in love with her. However, we see no clear reason for this accept for the fact that he finds her extremely attractive. Reed and Dempsey have some interesting scenes together, but there is simply not enough there for me to believe that love was what Dempsey was feeling. The movie also introduces viewers to Tess Cassidy (Myrna Hansen), the daughter of the rancher who Bowman’s thirst for money is putting at risk. She seems to exist simply for her to somehow instantly fall head over heals in love with Jim. She appears in just two or three scenes and barely speaks. Sure, she’s sweet and innocent, but is that really enough for someone – even someone as naïve as Jim – to lose his heart over so quickly? I just wasn’t convinced.

Also slightly disappointing was the critical storyline involving barbed wire. As a symbol of the changes that are taking place in the West, it works very well. Yet it is meant to be more that that. It is meant to be Dempsey’s kryptonite, the one thing that has the power to completely unnerve him or send him heading for a new destination. Watch the scene in which Mr. Cassidy shows him a piece of it, and you’ll see Dempsey immediately freeze up. When he does talk, it is in such a cold and menacing manner that Cassidy immediately asks both Dempsey and Jim to leave. We later learn why barbed wire has such a strong effect on him, and because of what we learn, Dempsey’s reaction seems quite understandable. However, Later, Dempsey is seen putting up barbed wire and while the necessity for that act is clear, there is little to explain how the sight of the wire no longer affects him in the slightest bit. It felt as if a critical scene was missing, yet with a running time of just under ninety minutes, it is unlikely that Vidor left the scene on the cutting room floor. It’s more likely that it was never in the script in the first place.

Despite this, Man Without a Star remains a good film, even if it lacks the emotional punch that it should have had. As always, Douglas is fun to watch, and he, Campbell, and Crain each give impressive performances. In addition, one of the joys of the film remains the dialogue, especially the snappy conversations between Douglas and Campbell and Douglas and Crain. Here’s just a sample: In what other movie could a woman deny a man’s request for a second kiss by explaining, “I don’t believe in overpaying the help”? Ouch. (on DVD in Region 3)