Review – The Story of G.I. Joe 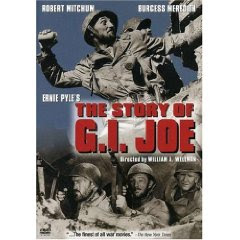 The jazzy music and sultry voice on the radio provide no hint of the broadcaster’s real purpose, and for a moment, there is no reason to believe that the woman playing popular music by such American icons as Artie Shaw has any ill-intent towards the men stretched out in the desert on their way to the front lines. She speaks to the men as if she understands them, knows how much they miss their hometowns, their families, their loved ones. Her voice fills the men with excitement, perhaps reminding each of them that it’s been too long since they held the women they love in their arms. And then comes the hammer – reminders of American losses and German victories, proclamations of German military superiority, and her slow soft appeal for the troops to simply surrender. It’s an appeal that is loudly rejected by the young men of Company C, 18th Infantry, which will soon be seeing its first action of the war in German-occupied Italy.

The regiment at the heart of William Wellman’s 1945 film The Story of G.I. Joe is made up of the kind of young men we admire so much for both their bravery and naïveté. These are men who run towards battles as bullets fly by them and grenades go off all around them, each of them possibly dreaming of being heroic in battle and having his name appear in the papers. However, as the film progresses, reality quickly sets in. This is war, and in war, there are casualties. The first casualty of war is often said to be innocence, and more often than not, that casualty comes with a much heavier price – loss of life. For the men of Company C, that loss comes in the form of a young man who moments earlier was described as eagerly awaiting a letter from his girl back home.

The film gives viewers a glimpse into the lives of six individuals. First, there’s Captain Bill Walker (Robert Mitchum), a man who is no stranger to war and its horrendous consequences. His second-in-command is Sergeant Warnick (Freddie Steele), who has a son he’s never seen and tries throughout the film to play a vinyl recording of his son’s voice that his wife sent him. We also meet Private Murphy (John R. Reilly), who we learn was too tall for the Air Force, Private Mew (William Murphy), a soldier with no immediate family, and Dondaro (Wally Cassell), an Italian-American man whose mind is always on the fairer sex. He is the only character in the film that I felt uneasy about, for many times it seems as if he is a caricature instead of a fully drawn out character, for I strongly doubt real soldiers would waste valuable time stealing kisses from Italian women they had just met during a battle. Finally, there is Pulitzer Prize-winning war correspondent Ernie Pyle (Burgess Meredith), who surprises Company C by marching all through heavy rain and blistering heat to the front lines with them. Pyle comes to consider Company C his company, and Company C comes to consider him their friend. Some of the film’s best moments involve conversations between the honorable captain and the admirable writer.

As a war film, The Story of G.I. Joe doesn’t disappoint. The film’s first battle is tense and heartbreaking, and nothing about Walker seems forced or cliché. You can see the pain in his eyes when he orders a pull-out, for he knows that the casualties have been high and the task incomplete. Later, Company C will find themselves dug in at the base of a hilltop monastery occupied by German soldiers. Each day soldiers go out on patrol, and often not every man comes back. For the most part, these patrols, as well as much of the fighting in general, occur off-screen, for this is a film more concerned about Pyle and the soldiers than the actual battles themselves. In fact, Pyle seems to write less about the war than he does about the men. He personalizes them for his readers, perhaps making casualties hit home with people who may not have known them in their everyday lives. These soldiers are, in a way, made to seem like everyone’s children.

Not everything works in The Story of G.I. Joe. I wondered how Sergeant Warnick could take a rather big phonograph with him into the trenches and how it would suddenly start working without any evidence that anyone in Company C knew the slightest thing about repairing one. There’s also an incredulous scene in which Captain Walker points his gun at a fellow soldier because he wants his men to have the same holiday dinner as other regiments. While I admire his dedication to his men, it’s hard to believe that an army captain would do such a thing. There’s also a rather unnecessary bombing during a marriage ceremony that seems to occur solely for dramatic purposes. Someone should have reminded the film’s many writers that there must be a consequence for such a scene to have a purpose, yet moments later, all of the soldiers are shown laughing and smiling, as if nothing had happened at all.

These minor quibbles aside, The Story of G.I. Joe works very well. We feel for Walker and his men and are moved by Pyle’s eloquent words. He gives us something that is sorely lacking in today’s coverage of war, which all too often reduces news of fallen soldiers to either impersonal statistics or brief vignettes that reveal little about the characters or personal stories of these brave young men and women. The New York Times at one time proclaimed The Story of G.I. Joe to be “the finest of all war movies.” The film is also said to have been President Eisenhower’s favorite war film. High praise indeed. While there are indeed aspects of the film that appear dated or seem silly by today’s standards, it’s not hard to see why the film has been praised as much as it has. Subsequent war films may be more realistic in their portrayal of battles and battlefield horrors, but there is something about The Story of G.I. Joe that continues to resonate even today. It remains a powerful, thought-provoking film. (on DVD)

Labels: 3 and a half stars, reviews, William A. Wellman