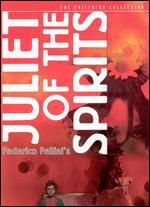 Juliet of the Spirits
by Paul Cogley

Juliet of the Spirits tries on an outlandish wig and hat. She hands these items back to her maids when her husband arrives home, and when Juliet greets him we see she is dressed in the plainest of attire. Fellini is alerting us here that is a woman at the cusp of a personal journey that has not quite begun. As the story unfolds, we learn that in spite of her housebound life and inattentive husband, Juliet is a woman open to self-discovery.

Juliet of the Spirits is the third of a trilogy of films that deal with the awakening of self-discovery. La Dolce Vita, 8 ½, and Juliet of the Spirits, when taken together, comprise an epochal achievement of Italian cinema. Each relies heavily on the rich imagery and blend of reality, dreams, and daydreams we identify today as Felliniesque. Juliet of the Spirits differs from the others mainly because the lead is a woman and the film is in color.

It stars Guilietta Masina who, besides being Mrs. Fellini in real life, starred in films Fellini made that spanned his career. She was a gifted actress who was given the added gift of working closely with a great film director who thoroughly understood the range of her talent. Before Juliet, Masina played the dauntless prostitute Cabiria in two films—Variety Lights and Nights of Cabiria—and was Gelsomina in La Strada, the role for which she is best remembered because of its Chaplinesque pathos. In their last film together, Massna was Ginger in the thoroughly enjoyable Fred and Ginger, opposite Marcello Mastroianni, the lead actor in La Dolce Vita and 8 ½.

Fellini was fascinated with the masculine/feminine duality of the human condition and it was natural that he would turn his exploration of self-discovery to the woman’s point of view. Indeed, far from merely substituting a female lead to act out scenes of circuses, beaches, and flying machines (all reimagined in this film), Juliet of the Spirit captures a woman’s character quite differently than the lead male characters of his two previous films.

Juliet is helped along in her journey by her own intuition, a spiritual guide named Iris, dream-memories of her grandfather, and a neighboring woman who exalts in the sensuality of life. A turning point comes when Juliet hires a detective to discover the facts about her philandering husband. The detective warns her emphatically that his investigation will likely shatter the security of her world. But Juliet, we shall see, will forsake security and, in doing so, will find her inner-child and hug her.

Juliet of the Spirits is not a straightforward narrative and challenges the viewer as realities and dreams experienced by the character intermingle to shape the story. But the genius of Fellini—unlike so many filmmakers that experiment with basic tenets of storytelling—always make our efforts to accept the film on its own terms worthwhile. The Criterion DVD of Juliet of the Spirits includes a BBC TV interview made during the making of the film Fellini was asked if he planned ever to return to the narrative style of filmmaking of his earlier career. No, the maestro responded, once you go through that door there is no turning back.
Posted by Azrael Bigler at 3:10 PM