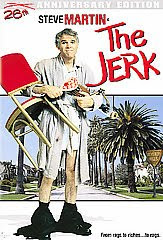 I find myself wondering if Carl Reiner’s The Jerk could be made today. The Jerk, like many of Woody Allen’s earlier films such as Bananas and Sleeper, is a collection of humorous, often ridiculous scenes surrounding a character that no one will likely confuse with any of their own acquaintances. Some of the scenes move what little plot there is forward; others exist simply to provide momentary humor before moving with rapid speed to another ludicrous set of circumstances. There’s nothing necessarily wrong with this approach to comedy. However, recent films such as the Scary Movie series, Meet the Spartans, Date Movie, and Epic Movie have somewhat dulled whatever interest may have existed for comedies without more realistic, linier plots. Would present-day moviegoers recognize the genies of Bananas, or would they find themselves yearning for the more accessible structure of Woody Allen’s more recent, equally creative film Scoop?

The Jerk centers on a man named Navin R. Johnson (Steve Martin) who cannot escape the feeling that he is different. As his African-American family sings and dances merrily outside their country home, Navin moves to the music awkwardly. He snaps his fingers just a moment after he should, and his feet are consistently out of step. Later, he learns the reason why – he is not his parents’ natural child. His response: “You mean I’m going to stay this color?” Not a contemptible remark, but certainly naïve. Later that night, he happens to hear big band music on the radio and is shocked when his feet and fingers begin moving in time with the music. By golly, he can dance! He takes this as a sign that it is time for him to leave the nest and become someone important. However, before he leaves, he’s given a few pearls of wisdom – Lord loves a working man, Don’t trust whitey, and See a doctor and get rid of it. Navin makes sure to commit these statements to memory. In another film, they would be important later. In The Jerk, they have no bearing on anything that happens later in the film. They’re just funny.

Navin’s journey will take him to St. Louis. Throughout the film, he’ll work at a gas station and later join a traveling circus. He’ll also meet two women. The first is Patty Bernstein (Calin Adams) a carnival daredevil whose legs are tattooed with the names of her former boyfriends. Patty is rather possessive and threatens Navin’s with physical harm if he even looks at another woman. The second woman is Marie Kimble Johnson (Bernadette Peters), a sweet and innocent young girl whose mother wants her to marry someone with a “special purpose.” This revelation makes Navin ecstatic because of something his mother told him about male anatomy and special purposes (don’t ask – just watch it), and soon Navin is convinced that he and Marie are soul mates. She’s not so convinced, though.

As the film progresses, Navin learns some important lessons about the value of money, love, and diligence. However, few of these lessons stick, and therefore, the arc usually present in a film about someone finding his place in the world is absent. There’s also the obligatory scene in which Navin must defend the honor of all African-Americans after a group of well-dressed men, possibly members of the local Italian mafia, declare their intent to keep African-Americans out of the upscale neighborhood Navin resides in. Like other scenes in the film, the scene, as well as the noble sentiments he expresses throughout it, leads nowhere and seems to exist partially so that the film can pay homage to Bruce Lee, something too many films have done since 1979 for it to be original or hilarious. In fact, the scene made me recall films such as 12 Angry Men and The Fortune Cookie, both of which include scenes in which heroic characters take a stand – sometimes an aggressive one – against bigotry and racism. In those films, there was a sense of nobility in the act. In The Jerk, the scene is simply played for laughs. Later, Navin donates money to help put an end to the evil practice known as “cat juggling.” We’re not told if his charity indeed makes a difference in the lives of those poor suffering felines.

By now, you may be under the impression that I disliked The Jerk, which is actually not the case at all. The film is in fact a lot of fun. This is mainly due to the performance of Steve Martin, who displays perfect comic timing and a willingness to be utterly manic. In one particularly memorable scene, Navin attempts to explain his perception of the amount of time that he and Marie have been together. It begins sweetly, with oddly romantic notions of days being like years and then devolves into sheer incoherency. By the end of his monologue, you’re simultaneously laughing hysterically and shaking your head in bewilderment. I would also like to commend Martin and his fellow screen writers, Carl Gottlieb and Michael Elias, for crafting a script that moves a mile a minute and is filled with wonderfully inventive puns, double entendres, and witty moments. It’s easy to see why Steve Martin has been so successful in Hollywood as both a writer and actor.

That said, however, in this eyes of this reviewer, The Jerk seems dated – not necessarily the jokes but the style in which the script was crafted. There is no over-riding message in the film and no real character growth, just a series of funny, wacky moments that added together create an enjoyable, yet ultimately forgettable experience – not that there’s anything particularly wrong with this. (on DVD)