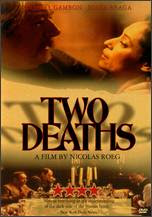 Why do we put pictures in areas where others will see them? I suspect we do so because the person in the picture says something about us. It may tell potential clients that we are family men, that we are the kind of people who fall in love, the kind of people that have earned the trust and love of others. The pictures that we display are almost always of moments in time that elicit positive memories, ones that we likely don’t mind sharing with people who see them as they walk along a hallway or sit patiently in a living room. In fact, I suspect we subtly yearn to be asked about the memories captured in those single moments in time. So what does it say then about a man who displays a photo of a woman that he says he completely destroyed? To me, it says that he is proud of his actions.

The sentiments above are made by Dr. Daniel Pavenic (Michael Gambon), the central characters in Nicholas Roeg’s ambitious film Two Deaths. They are made to three of Pavenic’s long-time acquaintances who have arrived at Pavenic’s lavish mansion for what appears to be their yearly reunion. As they are waiting for their feast to begin, they “stumble” upon a black-and-white photo of a rather stunning woman and begin speculating as to her identity. One surmises that she is a student who Pavenic got pregnant; another puts forth the idea that she is a long-lost – perhaps abandoned - daughter who unwittingly fell madly in love with him. It’s rather telling that neither of these theories portray Pavenic is a favorable light, and as we later learn, there are reasons for their pessimistic impression of their host. The picture, as it turns out, is of Pavenic’s housekeeper, Ana (Sonia Braga), and since not many people have pictures of their housekeepers in their living room, the three guests begin to entreat Pavenic to provide them with details. Unexpectedly, Pavenic informs Ana of his friends’ curiosity and asks her what she thinks he will say about the two of them. She responds, “I expect you’ll tell them the truth, or what you think is the truth.”

And then the flashbacks begin. It is up to viewers to decide whether they are seeing what really happened or witnessing Pavenic’s somewhat distorted memories of events that he now looks at with great esteem. Did Ana really just sit passively as Pavenic, then a complete stranger, began touching her inner thigh at a wedding? Did she really give him a glance that implied interest or intrigue? I remain skeptical that what we see is indeed exactly what unfolded, yet these are his interpretations of what happened, and his view was then and is now that she was a willing participant. The experience, he tells his increasingly horrified guests, made him hungry for more. She became, as he puts it, his obsession.

It is rare in films for stories told in flashbacks to be as frequently interrupted as Pavenic’s story is. James Cameron’s Titanic, for example, only breaks away from Jack and Rose’s love story once, and that’s to give the older Rose a chance to utter the line, “You mean did we do it?” When flashbacks are interrupted, it is usually because pivotal information is being withheld from the audience for the time being. A good example of this is 2007’s Atonement, which waits until the end of the film to reveal events that occurred many years earlier. However, Two Deaths breaks Pavenic’s narrative for very different reasons, for outside Pavenic’s spacious house there is an increasingly violent revolt occurring, and both civilians and soldiers require immediate medical attention, which to his credit Pavenic does not hesitate to provide. These intervals allow his friends, George (Patrick Malahide), Carl (Ion Caramitru), and Marcius (Nickolas Grace), to discuss their changing perception of their long-time friend and to reflect on their own weaknesses and shortcomings when it comes to relationships. After we hear their personal stories, we wonder why they would have continued associating with Pavenic for as long as they have. At one point, one of them looks at Pavenic and says, “I think you must be truly evil.” It’s rarely as simple as that, though.

Two Deaths is a complicated film that leaves many questions unanswered, yet this is as it should be. The story that Pavenic relates is not one that can be easily explained or understood, and he may not be telling the entire truth, for at one point, Ana calls him a liar to his face. What we are left with is therefore not answers but a portrait of shattered lives, Pavenic’s included. His is in essence a wasted life. As for his friends, these are men who, reminiscent of Nero and his fiddle, eat as their country crumbles outside them. They make passing references to the ongoing rebellion, but they quickly return to the dinner table and gulp down another dish that those protesting outside could probably not even afford to sample. Are they villains, then? I don’t think so. Rather, they are men beaten down by life, men who find themselves unable to take the kind of stand that so many people are doing just outside Pavenic’s residence. They know of no other way to survive than by keeping things the way they have always been, even in spite of how much they themselves have changed over time. Why else would they be where they are? Perhaps Cinca (John Schrapnel), a late arrival to dinner, says it best when after acknowledging the different men what each of them has become says, “Never let the latter interfere with the former.”

I cannot say for sure what the message of Two Deaths is. Perhaps it is that both love and obsession have the potential to unravel us, to make us do the unthinkable, and how, in the absence of personal happiness, people cling to things like power, possessions, and what they consider their principles to make it through life. It never occurs to some that change may be what’s needed. And so, change is suppressed, and revolts are put down. However, thoughts of revenge linger, often just under the surface, waiting for the most opportune moment to reemerge. What better moment than a strange dinner party during a revolution? (Currently out of print)