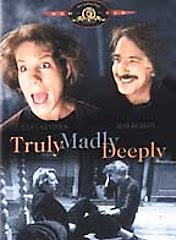 Anthony Minghella’s 1990 film Truly, Madly, Deeply takes place in a world in which ghosts exist. And they don’t just exist for one character. In addition to the lead character in the film, a young custodian readily admits to their existence, an older plumber confesses that he talks to his deceased wife every night, and when one character hears his neighbor call out her deceased boyfriend’s name, he does not immediately question her sanity. He may worry about her, but if you thought a ghost was visiting a friend of yours, I’m pretty sure you’d worry too.

Truly, Madly, Deeply primarily focuses on a young woman named Nina (Juliet Stevenson), who recently lost her boyfriend Jamie (Alan Rickman) rather suddenly. Months later, she is still grieving, so much so that during a counseling session, she weeps uncontrollably and proclaims her anger at Jamie for leaving her alone. And so he returns – perhaps because of how strongly she longs for him, perhaps because he has unfinished business of his own. The reasons don’t really matter, at least not in the beginning. The two of them hug passionately and together, they spend an incredibly wonderful evening together – they talk, they laugh, they play beautiful, fun music together, they exalt in each other’s presence – and before they know it an entire week has gone by in what appears to be a blink of an eye.

I imagine that this version of Jamie is exactly what Nina has been missing, and in many other films, it would be the only version of him that we see. However, as time goes by, strains develop in their rekindled relationship. They disagree over the setting on the thermostat, and he becomes a bit angry when she returns home late from work. In addition, she grows frustrated by his habits of inviting his fellow ghosts over to watch movies and making changes to her apartment without consulting her first. Soon Nina finds herself questioning the entire reason for Jamie’s reemergence. “He’s back,” she says, “and then what?”

Truly, Madly, Deeply reminds us that sometimes what people miss when someone dies or leaves is often not a complete picture of who they were or what the two of them were really like together. All too often, painful memories are forgotten, replaced by an idyllic yet incomplete version of two people’s time together. There’s another side to a relationship that death can too easily conceal, especially if the relationship was relatively new, and that appears to be the case with Jamie and Nina. Perhaps then they were blind to the truth.

I liked many parts of Truly, Madly, Deeply, in particular, the scenes involving Jamie and Nina. I especially liked how Jamie does not openly appear to display any of the wisdom or determination that we have grown to expect a ghost to possess when he returns to the world he left behind. Even he wonders why he has come back. To me, this made the subsequent deterioration of their relationship even more interesting. After all, why would a ghost return if he was only going to make a mess of things? The film takes an unfortunate turn when it introduces an alternative to Jamie. This character comes in the form of Mark (Michael Maloney), a sensitive, polite, and somewhat childish teacher. I say somewhat childish because his idea of an introduction is to hop and one foot while spouting off all of the relevant details of his life and then getting Nina to do the same thing. Exactly why this is appealing, I’m not sure. Another problem is that Mark is given so little screen time that it’s practically impossible to accept the bond that supposedly forms between him and Nina. Given the weakness of this character, I wondered why Nina had to find another person to love in order to move on with her life in the first place. After all, plenty of people move on first and then find love. Jumping to someone she hardly knows doesn’t seem like the wisest of moves for her anyway.

Other aspects of the film are equally confounding. Nina’s next door neighbor Titus, who I guess is also her handyman, professes to being in love with her, yet by the end of the film is with another person out of the blue. The film also introduces two immigrants who have had to give up their dreams since coming to Great Britain. One was a director in her home country, the other a doctor. Now they are a custodian and a waiter. However, as important and interesting as the issue of downward mobility is, it is used simply as a means of introducing Mark to Nina, which it accomplishes in one of the silliest and unrealistic ways I’ve seen in a long time.

I have a feeling I would have like Truly, Madly, Deeply more had it focused solely on Nina and Jamie’s relationship and the mystery of Jamie’s sudden reappearance. There is certainly enough there to interest viewers. Instead, what could have been an effective, interesting tale of a woman coming to terms with loss and reality ends on a rather predictable note. Still, the film is worth seeing for the performances of its two stars, as well as its observations of life, death, and memory. (currently out of print)