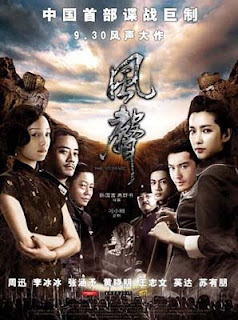 Chen Kuo-fu and Gao Qunshu’s recent film The Message presents a bit of a challenge for viewers. In addition to having a rather slow pace and the annoying habit of unintentionally removing the suspense from key moments in the film, the film asks viewers to care about the fates of five characters whose lives are in the hands of a ruthless Japanese colonel hell bent on discovering the mole among them. The colonel believes that one of these five people helped leak classified information to resistance fighters led by someone known only as Magnum. That data was then used to assassinate key figures in the region’s Japanese-controlled puppet government. Therefore, it can be argued that there is only one true “hero” in the film, the spy. Every other character, even the four wrongly accused officials, can be seen as a villain. Given how difficult it is for viewers to have sympathy for villains, I expected the film to delve into the personal stories of these five characters. Perhaps they have family members who are sick and in desperate need of expensive medical care, or maybe they are single parents with mounting bills. Such conditions would certainly make these characters worthy of our sympathy, for it would make them collaborators due to necessity, not opportunity. However, the film does not provide us with such details, and therefore, it may be hard for audiences to empathize with these characters.

Another strike against the film is that it lacks the suspense it needs to fully grip the audience. One character is revealed early on to be a great code-breaker, and since a spy film rarely shows its hand this early, we can easily deduce that she is not the spy. In addition, two of the other suspects have so little screen time that it’s easy to decipher that they also cannot have played a role in leaking the information. That leaves only two characters. As the film progresses, we see the investigation through the perspective of the ruthless Japanese general, and because he never quite figures out what’s going on, viewers are not able to put the pieces together completely either. Perhaps that’s why a character has to come forward at the end of the film and spell it out for us. Great films simply don’t do this, and the way it is done in The Message leaves a lot to be desired.

On the plus side, the film contains great performances by Li Bingbing and Zhou Xun, as well as a good performance by Huang Xiaoming as the Japanese colonel and Zhang Hanyu as Captain Wu Zhiguo. These performances keep the movie afloat and almost make up for the film’s poor musical score and inappropriate McG-style editing. This is not a Charlie’s Angels film, and therefore, it shouldn’t look like one. (on DVD in Region 3)

*The Message is in Mandarin Chinese and Japanese with English subtitles.
Posted by Azrael Bigler at 7:01 AM