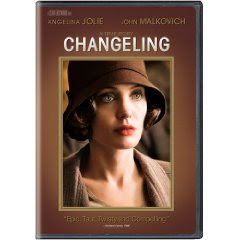 Clint Eastwood’s film Changeling gives viewers a powerful look at a woman going through every parent’s nightmare. It is 1928, and a young boy named Walter Collins (Gattlin Griffith) mysteriously disappears. Despite pleas for immediate help from his mother, Christine Collins (Angelina Jolie), Los Angeles police do not begin to look into his disappearance for twenty-four hours. Five months later, the police announce that they have found Walter Collins alive and well, but when the boy arrives, Christine takes one look at him and emphatically states that the boy in front of her is not Walter Collins. The police say she is mistaken and persuade her to take “Walter” home for a “trial basis.” What follows is a compelling story of persistence and dedication in the face of daily institutional obstacles put in front of her by those with the power to make her life much more of a nightmare than it already is. Angelina Jolie gives another excellent performance, and James Butler Harner is unforgettable as Gordon Northcott, the man who may be responsible for Walter’s disappearance. The usually impressive John Malkovich is somewhat underutilized in the role of Reverend Gustav Briegleb, a man who has made it his life’s goal to rid Los Angeles of corruption. I liked the pacing and the structure of the film, especially the way it juxtaposes Northcott’s trial with that of Captain J.J. Jones (Jeffrey Donovan), whose crimes and improprieties appear to have been numerous. Changeling deals with a tough subject matter, but it does it with heart and sensitivity. It’s a film well worth taking a look at. (on DVD)

Labels: 3 and a half stars, capsule reviews, Clint Eastwood