Review – If you are the one 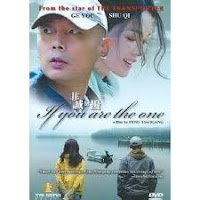 I am not an optimist when it comes to online romance. I’ve heard of too many people flying off to meet the supposed person of their dreams only to find a much older version of what was advertised. However, I must grudgingly admit that sometimes cupid’s arrow does find its way through internet chat rooms and social networks. An ex-girlfriend of mine is now happily married to the man she met in a chat room, and who in Taiwan can forget the incredible story of a local Taiwanese woman who, with the help of the World Wide Web, found her soul mate in the most unlikely of places, war-torn Iraq? However, to me, these happy endings feel more like the exception rather than the rule. I’d chalk it up to my age, yet some of the people proclaiming to have found that special someone through the Internet are the same age as I am. One thing seems for sure, though. The people currently using the Internet to find a soul mate come from all areas of society and are not just in the 18 – 30 age group.

In Xiaogang Feng’s 2008 film If you are the one, the one placing a personal ad on the Internet is a man in his forties, and his age has done nothing to make him less particular. In fact, his ad includes so many requirements that one would suspect he is describing an idealized version of some woman that got away instead of a woman he has any genuine possibility of finding in the real world. A few of my favorites of his conditions are that she be modern on the outside but traditional on the inside and that she not be an entrepreneur. He finds them to be too practical. And of course she must be attractive.

The man’s name is Qin Fen, and he is played by that great actor Ge You (To Live). You gives the character a no-nonsense attitude. He has seen much in his life, and he has little time to waste when he knows – or perhaps I should say he thinks he knows – that the person in front of him does not match him well. He is shocked when the first person that answers his ad is one of his former male co-workers, yet he is not rude to him. He even allows himself to consider for a moment whether he could in fact love another man before giving his former friend the answer he was hoping not to receive. This experience however pales in comparison to his second meeting. During this meeting, his date chastises him for not being filial enough and tries to sell him a burial plot for his father. In baseball, we’d call that strike two.

In films such as this one, all too often the women are used for comic purposes, each one having some personality quirk that allows the audience to laugh and for the male lead to turn them down and not have any regrets about doing so. Luckily, If you are the one is not one of these films. The women each have quirks for sure, yet they are not quirks that mark them as foolish or crazy. They’re just not what Qin Fen is looking for. One of these women is looking for a man who will marry into her family, another evaluates men in the same way as she would a stock or a bond, and one gives a rather unsatisfactory answer to the question of just how often she is interested in physical contact. Maybe that wouldn’t matter to some; it does to this man. My favorite of these brief meetings involves a woman from Taiwan who actually has a lot in common with Qin Fen. They just want different things.

The lead female character is Smiley Liang (Shu Qi). We know she is special because she feels uncomfortable with the way she meets Qin Fen. The two quickly decide they are not right for each other, and because they decide that so quickly, they decide to reveal very personal secrets about themselves, reasoning that there’s no harm in doing so seeing as how they’ll never see each other again. One of these secrets involves a lost love, the other an unfortunate relationship that has not yet ended. The scene is one of the best in the film. However unlike other films, the secrets they reveal do not bring them closer together, and the two depart never intending to see each other again. We have a feeling that they will, and sure enough, they do. Even then, though, the film avoids all of the clichés that films of this genre often fall into. Eventually the two of them strike a rather unusual bargain.

The film has its share of wonderful moments (the scene in the bar in Hakkaido), as well as some rather silly ones (Qin Fen’s extremely long confession). The film begins with an odd scenario that explains Qin Fen’s financial freedom and then returns to this storyline in its final scene. The beginning works providing you accept the notion that some wealthy businessmen will invest in just about anything; the ending however does not work at all.

The film is most effective when it focuses on the budding relationship between its two main characters. I grew a bit tired of Qin Fen’s blind dates, for as interesting as they are, they slow the story down. One of the results of this is that when Qin Fen finally admits to having feelings for Smiley, the moments seems somewhat false because not enough time has been spent showing these feeling develop. At one point, Qin Fen even brings up marriage. Why? Because he wants to spend his life with someone who doesn’t love him? I just didn’t quite buy it.

For a brief time, If you are the one was the highest grossing Chinese film of all time until it was eclipsed by both The Founding of a Republic and Feng’s later film Aftershock, a film that I had my fair share of problems with. I have fewer problems with If you are the one. Its premise is believable and timely, its central characters are interesting, and for the most part, it is well written. Still, the film would have benefited greatly by having a few more scenes early on establishing the relationship that develops between the two lead characters. That would have made the film’s ultimate message concerning the healing powers of love much stronger. (on DVD and Blu-ray)

*If you are the one is in Mandarin with English subtitles.
Posted by Azrael Bigler at 7:43 AM