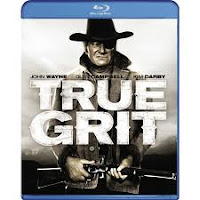 I rarely mention a film’s score, perhaps because I have always believed that the best scores do not stand out. Instead, they complement what we see on the screen so well that they are virtually unnoticeable, and it is extremely hard to separate them from the images that accompany them in the movie theater. Try listening to John Williams’ score from Star Wars without immediately recalling the opening scroll “A long, long time ago in a galaxy far, far away” or the theme from The Good, the Bad, and the Ugly without reminiscing on that film’s climactic final scene. It’s not easy. I would venture that we only really notice a score when it is either blatantly manipulative (trying to hard to induce tears or excitement) or simply doesn’t fit the action that is occurring on the screen, a description that could easily be applied to Elmer Bernstein’s score for Henry Hathaway’s True Grit. The film’s mostly upbeat score seems much more appropriate for a film about the discovery of new lands than one about three people out for either revenge or financial gain. Let me put it another way: Imagine Clint Eastwood and Morgan Freeman in Unforgiven riding into town to the score of City Slickers. That’s essentially what we have in True Grit, and it just feels odd.

That’s because True Grit is primarily a tale of revenge, not one of discovery or adventure, although certainly elements of each can be found in the film. What makes True Grit unique is the one asking for revenge. In the film, what constitutes “revenge” is the death of a man named Tom Chaney (Jeff Corey), and it doesn’t matter if that death comes in the form of a public hanging or at the hands of law enforcement. His death is sought by a young, fourteen-year-old girl named Mattie Ross (Kim Darby). Mattie is apparently so mature that she can manage her family’s money, as well as assess whether a business deal is worth doing or not. In the beginning of the film, Mattie’s father is killed by Tom Chaney, and it is Mattie who must identify the body and see that it is sent home for proper burial. She does so with a surprising degree of stoicism. She also sets her mind upon revenge. Mattie hears of a man with grit named Rooster Cogburn (John Wayne) and decides based on that description alone to hire him to catch Tom Chaney and bring him in so that justice can be had. Cogburn and Mattie are accompanied on their journey by a man named La Boeuf (Glen Campbell), who has his own reasons for wanting to capture Chaney.

Much of the first half of the film is spent establishing each of the characters’ personalities, and by the time the action begins, we have a good feel for who they are. Mattie is head-strong, resourceful, and slightly inexperienced; Cogburn is tough, troubled, and wasteful when it comes to money; and La Boeuf is a bit of a childish bore out to get the most money he can. However, as well as this is done, I couldn’t help feel that the film devoted too much time to establishing these characteristics and that it might have been getter for screenwriter Marguerite Roberts to get them on the road faster, seeing as how that’s what the audience knows they will do anyway. Instead, we get a few too many scenes in which Cogburn and La Boeuf attempt to leave Mattie behind and a few too many reminders of just why Mattie hired Cogburn in the first place. The film picks up steam once the three of them leave town, for beyond the city’s borders are roaming gangs just itching for a gun fight. And somewhere out there among them is Tom Chaney, who they learn has aligned himself with an outlaw known as Lucky Ned Pepper (Robert Duvall). The first part of his name turns out to be very well deserved.

True Grit works best when it’s aware of the peril that its three protagonists are in, and its action scenes are dramatic and well shot. I also liked the way the film doesn’t attempt to completely explain Mattie’s quest for revenge. The film could easily have included flashbacks that established a deep connection between her and her father, but these would have been unnecessary. Instead, the film gives us a scene in which Mattie watches a public hanging from afar and does not attempt to look away from it. It’s as if she accepts that what she is seeing is the natural punishment for those who commit terrible crimes. The film falters somewhat during scenes that are intended to demonstrate Mattie’s maturity and resourcefulness, such as the scene in which she practically extorts money from the man who sold her father some ponies and then buys one of them back. Some of these scenes go on too long and simply confirm what we already know: that Mattie is rather practical and that she has an incredible understanding of legal matters. They also delay the inevitable. The film also falters when its characters act younger than they should. In a few scenes, Cogburn and La Boeuf act like older siblings who don’t want their younger sister tagging along with them. These moments are intended to be funny, yet to me, they take away from the seriousness of the journey these characters are on.

Over the years, I’ve come to appreciate John Wayne as an actor as a result of his excellent work in such films as The Searchers, Stagecoach, and The Man Who Shot Liberty Valance. However, his performance in True Grit is not one that I will remember particularly fondly, which may seem particularly strange seeing as how Wayne won Best Actor for his work in the film. On the one hand, Wayne, his gray hair, his belly clearly visible, and an eye patch covering one eye, certainly looks the part. However, as I watched the film, I couldn’t help but notice that Wayne’s portrayal of Cogburn primarily consists of him speaking slightly slower than usual, barking orders suddenly, and yelling at every one around him. He even yells at someone during a scene in which his character is supposed to be suffering from a massive hangover. In addition, there’s an especially peculiar moment in the latter half of the film when Wayne’s body language resembles that of Al Bundy. In the scene, a character calls Cogburn fat, and from Wayne’s rather unnatural reaction, you’d think that he’d never been called this before. A man like Cogburn should have heard the insult, laughed it off, and said something like, “Well, this fat man is the last person you’ll ever see in this lifetime.” Now that would have shown true grit.

On the plus side, there is a surprisingly tender moment between Cogburn and Mattie, during which he opens up about his family and tells her the story behind the eye patch. In addition, there are moments when Cogburn assumes an intensity that matches the serious events that are taking place in the film. It was in these scenes that I was reminded of Wayne’s depth as an actor. However, to me, there just weren’t enough of these moments. Unfortunately, Wayne’s performance is not the only one that may raises eyebrows. As La Bouef, Glen Campbell simply never strikes the right tone. There are plenty of ways for a character to sound tough, yet Campbell relies too heavily on just one of them, and I got tired of seeing the character shout all the time.

True Grit is riveting at times, and at others, it seems more like an adventure film for children complete with sound effects that fit slapstick comedy much more than they do Westerns. It contains two very interesting characters, a promising premise, and a few scenes of surprising intensity. To me, the film would have been stronger with a few more. True Grit is a good film, yet it didn’t strike me as being the classic that people have said it is. (on DVD and Blu-ray)