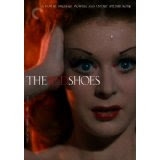 To me, the most important moment of Michael Powell and Emeric Pressburger’s The Red Shoes is also one of its quietest. In the scene, a composer named Julian Craster (Marius Goring) is lying in bed when he suddenly hears the beginning of a melody in his head. He rises quickly, trying to avoid waking his wife, who is sleeping in the bed next to his, and goes into the next room to play the notes on his piano. His wife Victoria (Moira Shearer) awakens anyway, and hearing her husband’s latest creation, she smiles. She then goes to the bottom drawer of her dresser, takes out a pair of ballet shoes, and for a moment contemplates putting them on. Ultimately, the shoes are put back, and instead of dancing to her husband’s new tune, she simply stands behind him and puts her arms around his neck. A smile breaks across Craster’s face, and we get the sense that he has everything he has ever wanted.

There are a few things that make this scene stand out to me: the two single beds are a reminder that these characters are living in more conservative times; the look Victoria has on her face when she looks at her ballet shoes makes us recall all that she gave up when she married Craster; and Craster’s pleasure at receiving his wife’s support makes me think of all the things that Craster is unaware of, namely that his wife has mixed feeling about the sacrifices she has made to be married. This is a woman who earlier in the film proclaimed that she lived to dance, and now she hesitates to even dance at home.

The rest of The Red Shoes is full of melodrama and eccentric characters that one must simply accept. I’ve been around the theatre enough to know that some people are like this, but even I found myself rolling my eyes at times. There’s the choreographer/dancer who fusses over every little detail and talk to himself to make points that he could easily make by being direct, the star who arrives forty-five minutes late, the lead dancer who seems to be unwilling to dance with the female lead without an audience present, the egotistical composer whose bragging only a fellow performer could find attractive, and the director who puts together shows in record time and demands that his cast sacrifice a great deal for their art. As for the enigmatic director, Boris Lemontov (Anton Walbrook), in a way, he is the perfect person to stage a ballet about a woman whom life passes by while she’s dancing. He too has watched the years pass by without allowing love or marriage into his life. In Victoria Page, I suspect he sees a kind of kindred spirit, someone that just might accompany him as he goes through life alone. He also sees someone with the potential for greatness.

The first half of the film builds up to a magnificent ballet rendition of Hans Christian Anderson’s tale The Red Shoes. What we see being performed starts out perfectly realistic, and then it suddenly becomes something that seems impossible to stage. The stage becomes more realistic, the spatial dimensions become larger than what seems possible, and reality and fantasy are suddenly hard to distinguish. Viewers will have to decide for themselves just what they are seeing; however, I viewed it as a sign that the ballet may have suddenly struck too close to home for Victoria. It’s similar to what sometimes happens during moments of sheer happiness – thoughts that were buried deep suddenly emerge, questions we had been putting off suddenly pop up in our mind. Perhaps this is the first time that she is aware of the conflict that now exists in her. Will it be love or her career?

The Red Shoes is well made, and its performances are fine for the most part. There’s an exceptionally well written scene during which Craster and Victoria are snuggling in a carriage that is being led by a driver who’s fallen alseep. The scene perfectly conveys the sense that these two characters are heading toward an unknown future, one that could be either prosperous or disappointing. In that scene, Craster reveals a very sweet side of himself, and I was finally able to understand what Victoria sees in him. The rest of the screenplay is equally well written, and throughout the first half, there are at least a dozen pearls of wisdom that viewers would be wise to remember. One of my favorites had to do with the difference between the feeling that one has to steal and the feeling of being stolen from.

Having said all of this, I must now admit something. For all there is to like about The Red Shoes, I was a bit underwhelmed by the film. Perhaps my expectations were too high, having seen it referred to as a masterpiece by so many people whose opinions on film I usually agree with. The basic story is one we have seen before, and in a few scenes, the film contradicts itself. For example, if Lermontov feels so strongly that marriage destroys careers, why does he rehire his former lead dancer after she gets married? I also didn’t believe that Lermontov could stage so many productions in so little time, and therefore, Victoria’s rise in stature seemed rushed and not altogether credible. In addition, I found the film a bit emotionally cold, as if something were keeping me at a distance from the characters and their experiences. I rooted neither for them nor against them. That may be because it’s all too obvious how the story will end. However, what I enjoyed about the film I enjoyed a great deal. The film looks absolutely beautiful, especially the extended ballet sequence, during which Shearer dances with a newspaper that magically turns into a real person. In addition, Anton Walbrook’s performance is one that I will remember for some time. Suffice to say then, The Red Shoes is a film that I have a feeling I’ll have to return to at some point in the future, if for no other reason than to allay the nagging suspicion that I missed something the first time. It wouldn’t be the first time it’s happened. (on DVD and Blu-ray)

Labels: 3 and a half stars, Powell and Pressburger, reviews