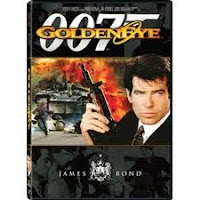 I suppose it had to happen sooner or later. Still, I can’t help feeling it was unnecessary and ill-advised. I’m referring of course to the verbal tongue-lashing that Bond receives from his new boss, M (Judy Dench), who is the successor to his old boss, also known as M. It turns out that M is the name of the position and not a nickname. Who knew? Now I find myself wondering what Q’s real name is. Throughout the 007 films, Bond has always had a somewhat awkward relationship with M, perhaps as a result of M’s rather careful and practical way of doing things and Bond’s incessant habit of rewriting the rule book to suit his purpose. In fact, I can’t recall M ever giving Bond a compliment; he’s much more likely to be heard frustratingly repeating the phrase, “Really 007!” It’s always been part of the fun – M and Q have been to Bond what Abbott was to Costello. Not anymore, though, and it’s not as fun.

In the scene in question, M calls Bond “a sexist, misogynistic dinosaur” and “a relic of the Cold War.” The film also contains a scene in which Miss Moneypenny gives Bond a piece of her mind for flirting with her in every movie and never following through on his promises. There are several problems with these two developments. The first is its implication that Miss Moneypenny ever seriously believed Bond was anything more than a co-worker that she enjoyed exchanging a bit of verbal jousting with. Only in On Her Majesty’s Secret Service was she ever really led to believe that something would develop between the two of them, and there’s no doubt in my mind that she completely understood why it failed to. Bond’s flirtation with Miss Moneypenny, though not exactly appropriate in a professional workplace, hardly seems the type that would have gotten her so frustrated that she would finally tell him off. However, there’s a bigger problem, and that is that Bond had already been moving away from the playboy image that Sean Connery, George Lazenby, and Roger Moore had played up so well. In the two previous Bond films, Bond, then played by Timothy Dalton, had been more of an action hero, and the women had been the type that could more than hold their own against international criminals. In both The Living Daylights and Licence to Kill, he was depicted as preferring this type of woman to one that is simply appealing on the outside. In fact, to make M’s dressing down of Bond make sense, the film has to bring back the old Bond, the Bond that threw out double entendres with ease and had no qualms about seducing women he hardly knew. Dalton’s Bond became involved with women who were musicians and undercover agents. Brosnan’s Bond, in contrast, pursues a crazed woman named Xenia Onatopp. Let the jokes begin.

Goldeneye is the first Bond film to take place in a post-Cold War world. However, anyone who thought the end of the Cold War would bring stability was wrong. The former Soviet Union is filled with former KGB agents and veterans of its ill-fated conflict in Afghanistan who feel abandoned by their government, and many of them have joined crime syndicates. There is also the small matter of the fate of Cold War technology. Just what does a country do with weapons it simply no longer needs? Unfortunately, the answer to that is not as reassuring as one would like it to be.

Goldeneye opens with Bond and Alec Trevelyan (Sean Bean), also known as 006, trying to destroy a chemical weapons lab in the Soviet Union. During the attempt, Alec is captured and shot. Bond, on the other hand, both completes his mission and gets away after one of the most spectacularly unrealistic escapes you’re likely to see in a film. (Memo to filmmakers: if you want a character’s reappearance to be a surprise, don’t list the actor playing him in the opening credits so soon after the lead actor. It’s not hard to put two and two together.) The film then jumps ahead nine years. We find Bond trailing Xenia Onatopp and trying to figure out what she’s up to. He doesn’t find out in time, and before he can stop her, she has killed at least three people and stolen a high-tech helicopter that is apparently so advanced that it can withstand an electromagnetic pulse. The helicopter comes in handy because the villains in the film intend to use just such a pulse to cause the world to fall into financial chaos.

This wouldn’t be a Bond film without a so-called “Bond-girl,” and in Goldeneye that role is given to a Russian computer engineer named Natalya Simonova (Izabella Scorupco). Simonova is one of the new breed of Bond-girls – smart, intelligent, resourceful, and - it goes with out saying – rather stunning. She is not, however, so intelligent that she avoids falling into enemy hands more than once. As Simonova’s co-worker Boris Grishenko, Alan Cumming overplays his hand, and the role quickly deteriorates into farce. And if Grace Jones’s disturbing romantic interlude with Christopher Walken in A View to a Kill made you uneasy, just wait until you see what Famke Janssen has to do as Onatopp. It’s enough to make you wonder how sincere the writers were in casting women in a respectable light. Or is it that only Bond-girls are supposed to be portrayed humanely in the new 007 universe?

Goldeneye works best when it focuses on the post-Cold War world, for it is this world that is filled with danger and excitement. I also appreciated the way the film used an event that many people may not know much about as the primary motivation for one of its villains – that being the “betrayal of the Cossacks” at the end of World War II. I was so fascinated by the conversations about it that I immediately looked it up after the film ended. More films should do this. However, for all its potential, Goldeneye gets bogged down in scene after insignificant scene, and for a good forty-five minutes, it’s as if all were seeing is filler. The villains have the technology, but don’t use it right away; Bond is caught, but not killed; and a lake magically vanishes to reveal a high-tech underground lair where the villain and his henchmen are about to hatch their evil plan. We’ve seen it all before, and unfortunately, we’ve seen it done better. I find myself agreeing with the late Gene Siskel on this one – If you like James Bond, you won’t like Goldeneye. (on DVD and Blu-ray)