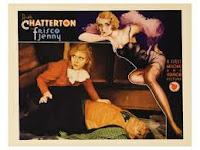 There’s a moment toward the end of William A. Wellman’s Frisco Jenny when the film’s lead character, Jenny Sandoval (Ruth Chatterton), is the subject of perhaps one of the most painful cases of character assassination I’ve seen in quite some time. The young man committing this act, District Attorney Dan Reynolds (Donald Cook), starts with Sandoval’s less-than-positive upbringing and continues all the way to the present day, in the process laying out evidence of a life of crime and decadence, one devoid of even a single positive contribution to society. It’s tough to sit through, and yet if you watch carefully, you’ll notice the faintest expression of pride on the face of Jenny Sandoval as she listens to Mr. Reynolds recite each her past mistakes and personal flaws. It’s a fascinating moment for the audience – for we know much more than Ms. Sandoval’s prosecutor does - and a confounding one for Mr. Reynolds. In fact, it is likely to haunt him for the rest of his life.

Frisco Jenny is one of those pre-code films that places its female protagonist in a rather unconventional occupation. When we first see her, she is helping her father run a brothel in San Francisco in 1906. Soon she’s running the place. Later in the film she’ll even add the title of bootlegger to her rather impressive resume. Usually a character like her has at least a morsel of remorse about the path her life has taken, yet Ms. Sandoval has no regrets at any point in the film. In her eyes, it was the only road available to her that didn’t lead to possible starvation. And watching her maneuver her way around the world her father understood so deeply proves to be extremely fascinating, for she does so without showing much in the way of emotional attachment. The people she works with, most of them powerful and corrupt men in public office, remain just business associates, and the only one among them that we feel had the potential to come to mean more to her doesn’t. In essence, Sandoval has cut herself off from the kind of strong emotional attachment that a romantic relationship would require. Her drive and her emotions are reserved for just two things, one of which is her thriving business. The second…well, that’s one of the film’s many pleasures, and to reveal it would be wrong.

Anyone with a knowledge of San Francisco will recognize the significance of the year in which the film opens, and the devastating earthquake of that year figures prominently in the events that transpire in the film. The scene depicting the earthquake is impressively done, and Wellman does an excellent job of giving viewers an understanding of the devastation that the earthquake caused and just how difficult it was for some residents of San Francisco to recover from it. In the film, the earthquake takes from Sandoval both her father and the great love of her life, whom she had planned to marry. To her and her fiancé, that promise meant that “waiting until marriage” was unnecessary. In a bold move, the decision is presented not as something Sandoval should regret but as a measure of her love for the man. In later films, such a scenario would have been harder to see in theaters.

Frisco Jenny does not start off very well, yet viewers should not be put off by the film’s rather awkward and dated opening scene. The scene is intended to show the wildness of the times but quickly descends into lunacy, perhaps intentionally. The scene contains some rather atrocious singing, as well as several incidents of women fleecing their customers and then marking their smoking jackets with a chalk circle. The marking acts similar to a scarlet letter, branding its wearer for the rest of the night as a man with no further money to pickpocket. The scene has a pace and feel that would likely have made Blake Edwards proud, which is not always a positive thing. I suppose it matters little that what we see makes virtually no sense from a business standpoint, for it probably vastly diminishes the number of repeat customers. In addition, why one of the men wouldn’t put two and two together and realize where all his money went is beyond me. Yet once this blatant and unsuccessful attempt to shock and tantalize is complete, Frisco Jenny shifts nicely and begins to focus on Sandoval’s attempts to survive, first by walking the straight and narrow and finally by following in her father’s footsteps. One guess which path it is easier to make a living in.

Being from the 1930’s, Frisco Jenny is also a victim of its time, and one of the film’s most troublesome elements is the character of Amah, Sandoval’s longtime assistant/servant. Played by Helen Jerome Eddy, Amah speaks slowly, as if to create an aura of mystique. The character reminded me slightly of Boris Karloff in The Mummy, and I couldn't help but reflect upon the shallow understanding Hollywood must have had of people of Asian descent, despite already having actors such as Anna May Wong and Sessue Hayakawa under contract. Fortunately, Chatterton and Eddy play their scenes together with enough confidence that contemporary audience should be able to at least look past this remnant of a shameful chapter in Hollywood history.

At the heart of Frisco Jenny is Ruth Chatterton, and she manages to keep her character sympathetic, even as she covers for and partners up with the kinds of people it would be best to stay away from. It seems this San Francisco is just one or two steps away from the Wild West, only instead of bandits with dark mustaches and their bank-robbing pals, we have officials with greying mustaches and alcohol runners. It is a credit to Chatterton that Sandoval never displays a shred of weakness, and unlike Chatterton’s character in 1933’s Female, Sandoval doesn’t break down or reinforce the stereotype that a woman can only handle pressure for so long. Jenny Sandoval is every much her cohorts’ equal, if not their superior. It would be all too easy to dislike a character like this. However, Chatterton makes you root for her from start to finish. It’s quite a feat, and it makes the film well worth watching. (on Disc 2 of Forbidden Hollywood Collection Volume 3 in Region 1)

Labels: 3 and a half stars, reviews, Ruth Chatterton, William A. Wellman