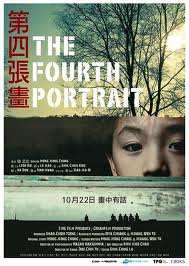 Mong–Hong Chung’s heartbreaking film The Fourth Portrait begins with the first of many unintended acts of cruelty. I say unintended because many of the people seem to have long ago given up any notion that they could change their own fate let alone alter someone else’s for the better. The film takes place in an area of Taiwan that its much touted economic miracle looks to have passed by. What we see is occasionally reminiscent of both a war zone and a ghost town, one whose inhabitants fled as quickly as they could and never looked back. In one scene, a young boy and the school janitor he refers to as “grandpa” rummage through abandoned buildings looking for something of value that they can sell so that one of them can get out of this place that time has forgotten. One of the eeriest sights is a child’s doll that lies in the middle of a messy, dusty room next to a cracked window. At one point, it brought someone joy.

The film begins in a hospital, where a doctor’s unintended act of cruelty leaves a ten-year-old boy alone in a room with his dying father. The boy is told to inform the doctor when his father stops breathing, and then he and the nurse leave the room. Perhaps there are other patients that require their attention. Perhaps they have just become numb to death and the people it affects. When death indeed comes, they ask the boy to return home and retrieve a good photo of his father and some clothes that are appropriate for a burial. The boy goes home, washes his father’s best shirt, and draws a beautiful portrait of him in pencil. It is the first of the film’s four portraits, and their significance grows as the film progresses

As the film moves along, people enter and exit the boy’s life. Unfortunately the ones that could help him exit too soon, and the one that could hurt him becomes a daily presence. With each new character, we learn a piece of the pain that exists in this seemingly distant land – an older man who lost everyone he loved fifty years earlier in a war-ravaged part of China during the Second World War, an awkward young man who he befriends a child just because he is kind to him, and a woman for whom life is and has been a constant struggle. In one scene, she holds up her Taiwanese identification card as if to prove that she deserves to be where she is. She’s wrong. In fact, she’s deserves much better. Who is this film doesn’t? Practically everyone is haunted by either earthly evil or the kinds of memories that some people drown themselves in alcohol to forget. Nowhere can the majesty of Taipei 101 or Kaohsiung’s Sky Tower be seen. In its place are the flickering lights of an outdoor lounge where men go to find pleasure in the arms of someone they couldn’t care less about. And then there is the ghost that haunts the boy, his mother, and his stepfather, the specter of a lost family member who should be there but is not.

The Fourth Portrait bares a slight resemblance to King of the Hill, Steven Soderbergh’s 1993 Depression-era drama about a young boy who is forced to fend for himself during trying times, especially in the film’s early scenes, when it is unclear just how the boy will survive. In one scene, we watch as he takes someone’s lunch from the refrigerator in the teacher’s room at school. What’s different about this film is its absence of a hero. In King of the Hill, we were always aware that the boy’s parents were out there somewhere, trying their utmost to return. That kind of hope is hard to find in The Fourth Portrait. Even the reappearance of the boy’s mother offers little in the way of relief. Quite the opposite, actually. In one scene, she explains to him the unfortunate circumstances that he now finds himself in. His mother has remarried, and she has had a child with her husband. This makes her son essentially a stranger in his own mother’s house. It seems an awful thing to say to a child, but to her, she is being honest. When she left him, he was in what she thought were safe hands, and it’s doubtful that a reunion was ever intended. As she puts herself puts it, how was she supposed to know his father would die? Sometimes honesty can be its own form of cruelty, regardless of intentions.

Like Chung’s previous film, 2008’s excellent Parking, The Fourth Portrait is not an easy film for viewers, and at a time when many Taiwanese films are focusing on much more light-hearted topics, such as love-struck teenagers, bread, and patriotic uprisings, it is refreshing to see a director who knows how to craft a story and create characters that the audience will sympathize with without having to make them slight caricatures. In fact, the only character that seems slightly out of place in the film is the boy’s newfound older friend, and yet even this character is oddly logical given the circumstances of the film. In fact, in The Fourth Portrait, each of Chung’s characters exudes a sense of realism that I’m sure many other directors wish they could create. That Chung has done it twice in a row is quite astonishing, and he remains a director to watch.

Once again, Chung also gets some incredible performances from his cast. Bi Xiao-Hai is mesmerizing as the ten-year-old boy, and Hao Lei gives a truly heart-breaking performance as his long-suffering, deeply troubled mother, a role that earned her Best Supporting Actress at the Golden Horse Awards. TV actor Na Dow is also affective as the troubled man who becomes the boy’s surrogate brother. This character’s actions don’t always make sense, but they do by the end of the film, and Dow’s last scene in the picture is quite moving. However, perhaps the character that stuck with me the most was the school janitor, played by Shih-Chien King. His delivery of a timely anecdote is absolutely perfect, and I have no doubt that his message will resonate with many viewers. The Fourth Portrait will not be easy to find or easy to muster up the impulse to watch, especially after this review, but I have no doubt that those who do will be moved by the experience. (on DVD in Region 3 and Blu-ray in Region A)

*The Fourth Portrait is in Mandarin and Taiwanese with English subtitled.
Posted by Azrael Bigler at 9:00 PM

Labels: 3 and a half stars, Mong-Hong Chung, reviews, Taiwan