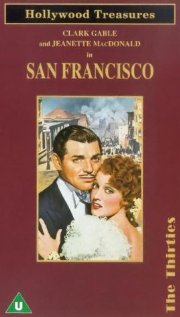 W.S. Van Dyke II’s 1936 film San Francisco begins with a scroll informing viewers of the grandeur, wonder, and excitement that filled the streets of San Francisco in the years that immediately followed the beginning of the 20th century. It ends with a somber reminder that all of this ended on April 18, 1906 at 5:13 AM. The film then takes viewers back to December 31, 1905, less than four months before that fateful day. By beginning his film in this fashion, Van Dyke seems to be telling us that all that we are about to see is history – the characters, the attitudes, the prevailing belief that blood and money make right. We know therefore that some of the characters we observe early in the film will not survive the quake, and we can assume that the ones that do will have had their lives permanently altered.

In the film, San Francisco is portrayed as a city at war with itself, as wealthy, upper-class families from Nob Hill battle it out with wealthy business owners from the Barbary Coast whose livelihood involves speakeasies, dancing girls, gambling, and Vaudeville-like nightly performances. The film opens with one of those grand Hollywood New Year’s celebrations that make you long for yesteryear. Confetti rains down from the sky as if it were being released by heaven itself, alcohol is free for everyone, and average people dressed in their Sunday best shout merrily while wearing some of the widest smiles you’ll ever see. It seems New Year’s bring out the kid in all of them. Through this mass of euphoria, the camera focuses us on Blackie Norton (Clark Gable), a sharply dressed, well-groomed man who could easily be mistaken for the city’s mayor. Norton seems to know everyone – everyone that is worth knowing at least – and when a fire engine is called into action, Norton hops on it as it passes so that he can find out where the fire is and make sure that everyone is safe. Of course, he also wants to make sure that it isn’t his business that is on fire.

The scene immediately establishes one of the film’s ominous themes, fire safety. From a later conversation, we learn that few of the buildings in the Barbary Coast meet safety standards and that the wealthy land owners in Nob Hill are not in a hurry to make the area any safer, for doing so would cost a lot of much money. A group of businessmen from the Barbary Coast want to change this, so they enlist Norton to run for supervisor, reasoning that if they have one of their own in the government, their concerns are more likely to be addressed. Norton somewhat reluctantly accepts.

On the one hand, Blackie Norton seems an ideal candidate. Everyone knows him, he’s a successful business owner, and he’s young and attractive. On the other hand, outwardly he is practically bankrupt morally. His childhood best friend, Father Tim Mullins (Spencer Tracy), refers to him as “unscrupulous with women” and “ruthless with men.” He’s also a man who is quick to respond to a dispute with his fist. However, we’re also told that there’s a humanitarian side to him, a side that according to Father Mullins abides by a strict moral code. He never lies or cheats, yet he seems “ashamed of his good deeds.” We learn that Father Mullins has tried and failed to help Norton see the light. Perhaps, he reasons, he is not the right person to help Blackie. Perhaps a woman might do the trick.

That woman may just be Mary Blake (Jeanette MacDonald), a newcomer to San Francisco whose home was destroyed in the fire. She is a singer and comes to Norton with a story he’s apparently heard time and time again – that of the daughter of a preacher who was raised to be traditional and learned to sing in the church choir. The story is supposed to discourage male suitors, but Norton’s heard it so many times, he’s practically immune to it. When she tells him she’s a singer, his response is: “Let me see your legs” and when he offers her a job, he takes her acceptance of the job as an acceptance of him, and very soon, his arms are around her. She resists, of course, which only makes Norton more determined than ever.

Blake turns out to have quite an amazing voice, and if you think it’s a little strange to hear it being used to sing jazz, you’re not wrong. Soon Blake is being pursued by Jack Burly, a wealthy aristocrat who also runs an opera. Upon hearing that Blake has always dreamed of being an opera singer, Norton does what every ruthless businessman would do: He refuses to let her out of her contract.

As Blackie Norton, Clark Gable gives a tour-de-force performance. In the hands of another actor, Norton could easily have been just another virtuous character at war with himself. However, Gable plays him in such a way that you’re never quite sure what side of him you’re seeing or whether you should believe the things he says. In one scene, he admits to being in love with Blake and yet as he says it, you can’t help doubting his words. His actions simply don’t match them. After all, what kind of man tells the woman he professes to love that in order to be with him, she must abandon her dream and perform in front of a packed house of drunken patrons, each of whom sizes her up with his eyes and hurls cat calls in her direction? However, towards the end of the film, there’s a moment when Gable dispels all your doubts about his feelings for her, and any actor who wants to know just how a man looks when he realizes for the first time that he truly loves someone should watch that scene and take notes.

I have a feeling that Clark Gable is known primarily for four films these days: Gone with the Wind, It Happened One Night, Mutiny on the Bounty, and The Misfits. However, this is an actor who started making films during the tail end of the silent period, and by the time of his death at the age of just 59, he had appeared in over 80 motion pictures. From what I’ve seen of him, he is one of those rare actors who is equally adept in both screwball comedies and dramatic period pieces, and I genuinely look forward to seeing more of his films.

Eventually the earthquake strikes in San Francisco. It has to, for it must render all that we have seem trivial. Van Dyke (or as rumor has it D.W. Griffith) shows the earthquake’s devastating effects on all classes and all ages, and the special effects work of James Besevi, Russell A. Cully, and A. Arnold Gillespie is truly astonishing. The aftermath of the quake, with its horrific ensuing inferno, is powerfully depicted, and we are left with a clear picture of just how much San Francisco suffered at this time, partly as a result of the haves not wanting to make the have-nots just a tiny bit safer. However, what emerges when the flames are put out is not a city divided by classism or filled with anger. Instead, it is one of unity. Both sides have lost, and both sides now rise up together and proclaim their desire to fight on and to rebuild. It is as it should be, as it should always have been. (on DVD)