Review - An Affair to Remember 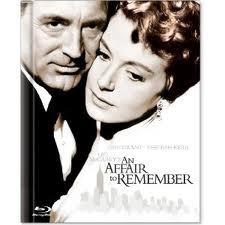 Towards the beginning of Leo McCarey’s film An Affair to Remember, there’s a scene that made me stop and think for a moment about the differences between society in the late 1950’s and society today. The scene includes an invitation by Nickie Ferrante (Cary Grant) to Terry McKay (Deborah Kerr), a young woman he has literally just met on a cruise ship. That the invitation comes from Ferrante is not a big surprise. He is after all a notorious playboy who elicits both swoons and jealous, vengeful outbursts from women he has playfully scorned. And it’s not that he’s a terrible man; it’s just that he’s insincere. His invitation to Ms. McKay comes despite the fact that he is engaged to marry into a very wealthy family in the “rock and gravel” business. In the scene, Ms. McKay accepts his offer, yet insists that they go to her room for the drinks. What fascinating about this is that going to her room seems to imply that romance is out of the question. This might seem a little odd to today’s audiences, who are likely accustomed to seeing rather quick trips to the bedroom in films. However, there were rules that gentleman followed back then. In fact, Orson Welles refers to the same notion in Citizen Kane, during the scene in which Kane accepts Susan’s invitation to come upstairs and dry himself off after a passing car splashes water all over him. Both Kane and Ferrante are forced to be on their best behavior, although to be honest, the task seems much, much harder for Ferrante.

Ferrante and McKay’s early scenes cackle with an intoxicating and biting wit that is a pleasure to lay ears on. Ferrante has clearly met his match, and since his best lines have no effect of McKay, he’s forced to play it straight for a change. At one point, McKay hurls the line, “I hope I didn’t hurt your ego” at him. To his credit, he doesn’t seem to mind. Perhaps it’s a relief from the monotony that comes with saying the same old pick up line time and time again. This puts McKay in an awkward position, for in the history of film, I don’t think a man has ever not given chase to the woman who seems different from every other woman he’s met. Eventually, they decide to dine together, where they open up about their lives and loves. She is a former lounge club singer, whose finance “saved” her from a wretched life of drunken customers and lecherous managers – the fiance’s sentiments, not hers. Ferrante’s a guy whose never had to work a day in his life, and if he sticks to his present course, he’ll end up one of the richest kept husbands in New York. In short, neither one of them is heading in the right direction. Of course, that can only mean one thing.

With a title like An Affair to Remember, I expected a drama, and yet much of the film’s first act is a comedy about two people finding themselves irresistibly drawn together, while trying to remain emotionally distant. Again, McKay tries a bit harder than Ferrante does. The film takes place before pictures could go viral within minutes of being posted online and before the twenty-four hour news cycle made celebrity gossip a regular part of news programs. However, it’s interesting to see that even back in 1957 people had an insatiable appetite for gossip. The film begins with the announcement of Ferrante’s engagement to Lois Clark on multiple television broadcasts, giving viewers just a taste of the media’s interest in the private lives of the rich and famous. Later, we get early evidence of how the wealthy used the media for their own exposure, as Clark invites the media into her home to interview her and her fiancé upon his return from sea. Needless to say, the interview does not go according to plan, especially when the nosey reporter asks about the date of their wedding. Oh, Ferrente tells the television audience when he’s going to get married all right; he’s just not talking about marrying Ms. Clark.

An Affair to Remember hits its dramatic high point during a stop over in Italy. There, Ferrante says he is going to pay a visit to his grandmother, Janou. McKay thinks Janou is code for a beautiful woman in her thirties, so she tags along if only to gather evidence of how much of a cad Ferrante is. She learns the opposite, and it is the start of something surprisingly touching and believable. Much of this is due to the joyful, sweet performance of Cathleen Nesbitt as Grandmother Janou. Through her, we learn a lot about the two lead characters, and they in turn learn a lot about each other during their all too brief visit. At one point, Janou tells McKay one of the most moving lines of the entire film: “You have still to create your memories.” The comment could be seen as a observation of McKay’s age, or it could be seen as a gentle warning – make sure you are creating memories you want to remember later on. Grandmother Janou is in only one scene in the film, and yet I don’t think I will ever forget her.

Not everything works in An Affair to Remember. I didn’t quite believe the reactions of the passengers on the boat. They seem deliberately amplified for the amusement of the audience, yet their reactions do not seem realistic at all. One scene in particular makes fools of both Ferrante’s and McKay’s significant others. Also problematic are the two elongated musical performances that serve absolutely no purpose but to prolong the film a good ten minutes longer than it needs to be. However, these are minor quibbles about a film that otherwise works like a charm. Grant and Kerr play off each other superbly, regardless of whether they are delivering comic banter or pouring out their hearts. I also appreciated the way Clark and McKay’s fiancé, Kenneth Bradley, are not portrayed negatively. They’re just two decent people whose loves have drifted away from them. It happens.

Made today, there’s no doubt that the film would be much steamier, yet that would be to ruin what works so well in this one. This is a film that builds not toward romantic intimacy but a lifetime commitment to be there in both good times and bad, to make themselves worthy of the other person even if the path to this goal means being temporary separated. There’s something rather noble about that. And there’s something timeless about An Affair to Remember. (on DVD and Blu-ray)