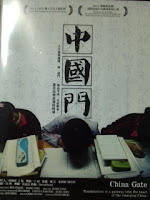 If the figure quoted in Wang Yang’s fascinating documentary China Gate is accurate, almost 300,000 students in the area surrounding Huining High School take the university entrance exam in China each year (nationally, the number tops nine million), and of those 300,000, just 70,000 achieve a score that qualifies them for entrance into China’s prestigious universities. Put another way, about 76% of students who take the test fail. 76%. It’s a distressing figure. And just what awaits some of those lucky students who actually pass the test? A college education paid for through loans, the mortgaging of what little land a family has, and the life savings of relatives who have little chance of ever saving up that much again.  It hardly seems worth it.

Yet try telling that to the young, wide-eyes students we are introduced to in the documentary. Each of them possesses the kind of self-confidence and determination that all youth should have. In one scene, the students are encouraged to stand up and share their reasons for wanting to go on to college. For some, the motivation is to help their families; for others, it’s the chance to see new places and have a more exciting life. The students are implored to keep pushing themselves, for, as their teacher tells them, the key to their success is effort, not wisdom.

And effort is what the students give. Whether it’s healthy or not is another matter. The film begins with the unsettling sight of students at their desks loudly reciting information out loud, their desks stacked haphazardly with every kind of reading material you can imagine, sans smart phones, computers or iPads. Those devices don’t seem to have reached this far into the countryside. Some of the students rock back and forth incessantly as they read aloud. The theory behind it seems to be that the constant repetition and vocalization will help the information stick in their heads. One of the film’s most memorable scenes occurs on the school playground, where instead of joyful chatter and competitive games of basketball, students walk around, books in hand, reciting whatever information is on the agenda to be learned that day.

The students we meet are from Yao Ping Village, a poverty-stricken village near Fujian, China. In one scene, Wang Yang turns his camera away from the students to show viewers the dry barren land that these children have grown up in. It appears that time and progress has completely forgotten this part of China. In one of his books, Thomas Friedman talks about the “skyline test.” According to him, if you can look into the distance and not see the skyline through the tall skyscrapers, banks, and apartment buildings, you know you are in a developed or developing area. Yao Ping Village, unfortunately, does not pass this test. In fact, only one area of Yao Ping has a suburb-like appearance to it, the area surrounding the school, where apparently the students live during the month leading up to the exam. Many parents stop farming and move closer to the school as well, hoping to be able to help their children succeed. For many of them, this means cooking for their children In one of the most eye-catching scenes, Wang Yang shows us pile upon pile of what first appears to be rubbish. On closer inspection, we see that they are bags filled with food, and each one has a student’s name on it. One of them reads, “Food for the week.”

The heart of the film is of course the students. There’s seventeen-year-old Yang Huibing, who believes that “all the best things are in the city” and worries that even if he passes the test, his family won’t have the means to send him to a university. His mother assures him that they can take out a loan. Then there’s a young lady named Yao Xun, who is conflicted about the possibility of leaving home. Wisely, the film does not restrict itself to high school students. Yang also journeys to Beijing and Shanghai to talk to recent graduates about their experiences after graduation. The most memorable of these individuals is Wang Xiaozhi, who lives in Tang Jialing, an apartment complex that he refers to as a “slum-like place.” It’s not hard to see why. His experiences, as well as those of another recent grad named Ma Long, demonstrates just how hard it can be to make a living in Beijing.

Not everything in the film works as well as it should. An interview with a music tutor in Shanghai goes nowhere, and despite being genuinely nice people, no one associated with Huining High School comes off as well as they should. The reasons for this is that all viewers see them doing is imploring students to study hard, give 100%, and to keep going. We don’t see them actually teaching the students anything. Maybe this is what they wanted the camera to capture them doing, but it does leave one to wonder just how much “teaching” is going on. Also, the film is divided into segments that are introduced by the Chinese characters for such things as adventure, family, and blessing. They seemed unnecessary to me, but I may not have the right background to understand their connection to the people in the film or their experiences.

However, the film as a whole works wonderfully. We feel for the characters Yang interviews and wish them better futures than their presents. Yang also displays a willingness to let the characters speak for themselves, and it gives the film a great deal of authenticity. Kudos should also be given to David Braid, whose piano score perfectly captures the strain, the futility, and the beauty of what is unfolding on the screen. At one point in the film, we see the students climb to what to them must feel like the top of the world. They smile, laugh, and cheer at being in such a place. It is a rare moment of joy at a time in their lives that is filled with so much stress. They all deserve to succeed on their exams. Unfortunately, only 23% of them likely will. (on DVD in Region 3)

*China Gate is in Mandarin and a local dialect with English subtitles.
Posted by Azrael Bigler at 9:00 PM

Labels: 3 and a half stars, documentaries, reviews, Wang Yang