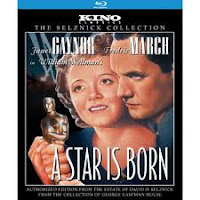 In a film about a character that rises to the top of her profession, it is often hard to resist the temptation to show the audience “evidence” of a character’s immense talent. However, resist it they should, for too often what an audience is asked to believe catapults one to the head of her profession simply fails to impress. For evidence of this, look not further than Zhang Ziyi’s dance in Memoirs of a Geisha, Piper Perado’s rendition of “Can’t Fight the Moonlight” from Coyote Ugly, and the song written exclusively for Effie in Dreamgirls. There would be nothing wrong with any of these scenes were it not for the fact that we are asked to accept them as being much better than they actually are. William A. Wellman’s 1937 film A Star Is Born makes a similar mistake, albeit only briefly. It elects to show the audience the opening moments of The Enchanted Hour, the film that we are asked to believe makes Vicki Lester a star. The scene is brief, but nothing in it justifies the praise and acclaim that the audience proclaims as they exit the theater after the film. This is unfortunate, of course, because as Vicki Lester, Janet Gaynor gives a rather stellar performance, and because as a whole A Star Is Born is a very impressive picture.

In the film, Gaynor plays Esther Blodgett, a young woman fascinated with films who yearns to be an actress herself. In typical fashion, her dreams are initially discouraged and ridiculed by family members. There’s even the obligatory “I’m going to be someone” speech, which seems appropriate in a film like this. Only Esther’s wise, feisty, pioneering grandmother Lettie (May Robson) encourages her to take a chance on her dreams. However, she warns Esther that success will not come without pain. She’s more right than she knows.

With her grandmother as her benefactor, Esther sets off for Hollywood, where she first encounters hardship and rejection. One day, a friend asks her to be a waitress at a party of Hollywood bigwigs. There she happens upon a troubled, alcoholic Hollywood star named Norman Maine (Fredric March), who takes an instant liking to her. Between his wooing words, his possibly insincere expressions of flattery, and his carelessness with plates, it is hard to see just when he spots her star quality. However, there he is later calling his producer, Oliver Niles (Adolphe Menjou), at 3:00 AM and extolling the talents of this amazing woman he’s just met. It is something that Oliver has heard before. Needless to say, this time is different. The two eventually fall in love, yet as Esther (now known as Vicki Lester) begins to rise in Hollywood, Norman’s career sinks, and with it go his sense of self and purpose. In one particularly telling scene, a postal delivery boy doesn’t recognize him and then, adding insult to injury, asks him if he is “Mr. Lester.”

Throughout his career, William A. Wellman had a knack for creating believable characters, and Lester and Maine are great examples of this. Lester perfectly captures the wide-eyed, overly confident nature of many young girls who have made their way to Hollywood over the years, each believing they have the right qualities to make it, and Maine is a realistic example of the kind of person who achieves success, has trouble coping with it, and is undone by his own actions. How many times have we heard of actors with amazing talent whose erratic and self-destructive behaviors eventually render them unemployable? The question then is: Will love be enough to save Maine from himself?

The film is hurt slightly by two questionable casting choices. First, Wellman elected to cast Andy Devine as an assistant director whom Lester befriends upon arriving in Los Angeles. Devine was often cast as loud, sweet characters who were not exactly the sharpest knife in the drawer, and these characters work well in comedies or westerns. Here, his character stands out for the wrong reasons. There’s nothing more unwise than a drama trying to evoke laughter when it should be trying to evoke empathy. The second problematic character is the studio publicist, Matt Libby (Lionel Stander). Again, there’s nothing necessarily wrong with the way Stander plays the role. However, the film wants viewers to believe that Maine views Libby as a friend, and with all of his course comments and insulting remarks, it’s hard to believe Maine would truly feel like that.

Questionable casting choices aside, this is a film that lives or dies on the storyline involving Maine and Lester, and it is this aspect of A Star Is Born that makes the film great. We care for these characters, and we should. Like the rest of us, they are imperfect, yet they remain steadfast in their belief in each other. In fact, it is this deeply-held belief that drives them to make the decisions they make throughout the film. Never do they not have the other person in their thoughts. It goes without saying that Lester’s grandmother will reappear toward the end. However, even this bit of predictability seems perfectly realistic. When a character is down, it seems only natural that someone she looks up to will arrive to remind her of all of life’s imperfections and reinspire her. The scene works magnificently, as does the much of the rest of A Star Is Born. It remains an involving and effective film. (on DVD in Region 1 and Blu-ray in Region A)

Labels: 4 stars, A Star is Born, reviews, William A. Wellman