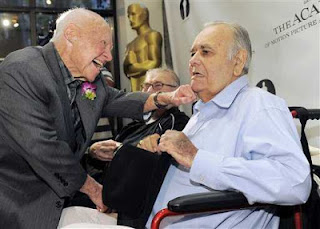 This is a photo of Mickey Rooney hamming it up with Jonathan Winters at a gala event in July. With his good-natured toothy expression, I saw it and thought that the spirit of the 16-year-old Andy Hardy must still live inside him.

The occasion was the Academy of Motion Picture Arts and Sciences 50th anniversary showing of It’s a Mad, Mad, Mad, Mad World. For us Rooney watchers, it was great to see Rooney in such high spirits. Lately, when he’s in the news, it’s often about allegations of elder abuse. Also, that evening, Rooney gave an impromptu tribute to Ernest Borgnine, who had died the day before. It was reported to be quite touching.

The popular Andy Hardy movies made Mickey Rooney a household name. The series would later be a touchstone in entertainment history because they foreshadowed the family sit-com genre that would dominate TV some two decades later.

But maybe even more socially significant, Andy Hardy introduced a new kind of adolescent to the public’s consciousness, the teenager.  In an often cited article, sociologist Thomas Hine traced the rise of the teenager to the dramatic disappearance of jobs in 1933, when virtually all young people were thrown out of work as part of public policy in order to reserve jobs for men trying to support their families. That action led to an influx of young people with time on their hands, to the huge expansion of high schools, and, finally, to the creation of a self-identity of the new subgroup.  Then, as described by Hine:

“Late in the 1930s a new kind of youth emerged in the movies, personified above all by the bizarre boy-man Mickey Rooney and the Andy Hardy movies he began to make in 1937.”  (American Heritage, Sept. 1999)

The Andy Hardy series of movies are seldom seen today. But at least one in the bunch has earned a respectable critical reputation: Love Finds Andy Hardy (1938), the fourth in the series. Since I had never seen an Andy Hardy movie, I decided to check this one out.

Five minutes into the movie, I decidedly parted company with Hine and his description of the 16-year old Rooney as a “bizarre boy-man.” I was thoroughly charmed by the 16-year-old Rooney. I watched it along with two other adults, and judging by our bursts of laughter, this young teenager was a very funny guy. When the movie got serious—as when Andy turns to his father, Judge Hardy (Lewis Stone), because he’s in over his head in girl trouble— the dialogue got insightful and warm. Judge Hardy dispenses sound, fatherly advice with a twinkle in his eye. An interesting diversion takes place when a friend makes a Ham radio connection to Canada; detailed and technical, the scene foreshadows the fascination teenagers will have with communication devices.

Of course, this is a movie about youth attracting and coping with the opposite sex. The plot itself has to do with a high school Christmas dance, Andy’s need for $8, how he finds himself with more than one date to the dance and how he stresses over it. Amazingly, two of the young actresses in Love Finds Andy Hardy went on to have important Hollywood careers. Future-superstar Lana Turner is the beautiful head-turner who smooches with Andy on a park bench, and future-legend Judy Garland plays the neighbor’s grandkid with the spectacular singing voice and a crush on Andy. This is Judy at age 14, when she is more child-like and inches shorter than Oz’s Dorothy, a more-perfect fit for the role she would play some 18 months later.

I have no doubt Love Finds Andy Hardy would entertain any audience today, young or old, if they gave it a chance. I expected it to be corny, but what I saw was very clever. I expected it to be plodding, but it’s fast-paced. Also, it’s well scripted and good-natured, and features a very funny teenager who—the experts say—happens to be the first teenager ever featured in a film.