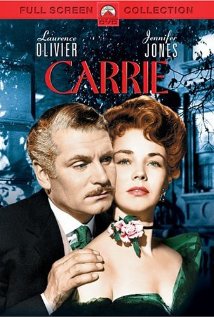 William Wyler’s excellent 1951 film Carrie reminded me that there are times when ordinary people have just moments to make the right decision, for if that moment passes and the correct decision has not yet been made, the temptation to do the wrong thing may prove too strong to resist. Wyler’s film is full of moments like this, and the characters, imperfect as the rest of us, do not always choose the moral path, albeit often for the best of reasons. The first such decision involves a loan of $10, a pittance these days, but a great deal of money in 1951 – two week’s wages, we learn. The loan would be insignificant coming from a family member or life-long friend. Here, however, it comes from a stranger, and the situation is made more complicated by the fact that the stranger is a man named Charles Drouet (Eddie Albert), a character who just one scene earlier had been throwing out creepy, unwanted flirtations to the young and naïve heroine of the film, Carrie Meeber (Jennifer Jones).

In fact, from the looks of things, the world in which young Carrie lives seems downright inhospitable to downtrodden women. They are made to work in unsafe environments, get lecherous glances at every turn, and are deemed outcasts at the slightest rumor of impropriety. However, in fairness it must be said that men hardly fare better. The most successful of them live in communities more focused on reputation than happiness, and if preserving a reputation means crushing someone’s dreams, well, that’s just one of the many sacrifices that success and wealth require.

Carrie accepts the loan, of course. In fact, eventually she accepts much more from Mr. Drouet, including a place to stay (his place) and a somewhat comfortable existence. What she does not get, though, is a proposal of marriage, and in 1951, that mattered a great deal. In one particularly chilling scene, we learn that the children in their building have been told not to associate with Carrie. The message: Decent women get married first.

Through her association with Mr. Drouet, Carrie happens to meet George Hurstwood (Laurence Olivier), a man who presents quite a contrast to Mr. Drouet. Unlike Drouet, who is somewhat crass and relies on a rather warped sense of humor a bit too often, Hurstwood speaks eloquently and politely, and his behavior toward Carrie is both respectful and gentlemanly. How could she not fall for him?

Carrie could easily have been a rather simple film about a woman torn between two men. It is much more than that, however. Based on Theodore Dreiser’s novel Sister Carrie, a book that some publishers apparently thought was “too immoral” to publish, Carrie is an indictment of a society obsessed with class and wealth. In the film, the poor are seen by the upper class as both exploitable and exploitative, and the wealthy are obsessed with maintaining appearances often at the expense of happiness and fulfillment. In one telling scene, Carrie is asked if she loves Drouet. She replies that when you’re poor, you often like whoever is kind to you. Later, the same character, now in a different situation, is asked whether she’s happy. Her response: “Look at me. Look at where we are.” The message seems to be that it is much easier to be happy when you are not worried about where the next paycheck will come from.

If there is a fault with the film, it is the way it resolves the financial woes that inflict Carrie and Hurstwood. There’s little in the film to suggest that Carrie could find employment in the way she does and even less that explains why she would rise in prominence so quickly. It would have been much more realistic had she taken a normal job. Perhaps she could have become a teacher, for in several scenes, the film seems intent on demonstrating just how good she is with children. However, when was the last time a teacher achieved the level of notoriety required for what takes place towards the end of the film to be able to occur?

William Wyler made a career of making films that were both timely and important. His films are often about ordinary people dealing with extraordinary situations: from veterans of World War II trying to put their lives back together in 1946’s The Best Years of our Lives and the power of whispers and innuendo in 1961’s The Children’s Hour, to the strength and courage of the Miniver family during the first few months of the Second World War in 1942’s Mrs. Miniver. He had a knack for presenting realistic characters and for getting top performances from his cast. Carrie is no exception. Jones, Olivier, and Albert each give powerful performances, and the film’s supporting cast, which includes Miriam Hopkins as Julie Hurstwood and Basil Ruysdael as George’s boss, Mr. Fitzgerald, match them superbly. How the lead performances were not awarded with Oscar nominations is anybody’s guess. (on DVD)