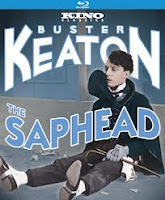 The Saphead is not the kind of movie that people think of when they hear those magical words “starring Buster Keaton.” It lacks the zaniness and physical comedy of his other films, and in only one scene is there a hint of the kind of comedy Keaton was then doing in his silent shorts. Like other early silent films, The Saphead is an adaptation of a popular play. That play, Bronson Howard’s The Henrietta, had already been made into a theatrical film in 1915 called The Lamb, starred Douglas Fairbanks. In fact, it is said that it was Fairbanks himself who suggested Keaton for the role of Bertie Van Alstyne in the remake.

In a way, Keaton is perfectly cast in the role. Like many of the other characters that Keaton went on to play, Bertie has a youthful naiveté that will look familiar to viewers. The character is slightly pampered, extremely inexperienced in life, equally inexperienced in love, and a misfit to the way the world (not to mention the stock market) works. Towards the beginning of the film, it is revealed that Bertie is reading a book entitled How to Win the Modern Girl. The book advises men to disregard all they have been taught about respect and sensitivity and embrace sports, gambling, and alcohol. Those are the habits, it claims, that truly drive women wild. The gag has the potential for great laughs, and it is fun to imagine what Keaton would have done with it had he been in the director’s seat. Alas, that is not the case, and after a relatively humorous bit in which Bertie unsuccessfully attempts to convince the police to arrest him, the bit is entirely abandoned.

The Saphead tells a rather simplistic story. Bertie loves Agnes Gates (Beulah Booker), the adopted daughter of a wealthy banking executive named Nicholas Van Musgrave (Edward Connelly), who insists that Bertie make something of himself before marrying Agnes. Musgrave’s other daughter, Rose (Carol Holloway) is married to Mark Turner (Irving Cummings), an unsuccessful lawyer who is somehow connected to a dancer who is destitute and dying. Towards the beginning of the film, a young woman, possibly the dancer’s daughter, brings him a note imploring him to see her at once. It is telling that Mark’s first response is to tear up the letter and make sure its scraps cannot be innocently discovered. Clearly the man has something to hide.

Unfortunately, the film is hit and miss. The hits include a wacky bit at the end involving a misunderstanding over a name that the film nicely sets up early on, a grin-inducing moment in which Keaton tell his love the words he mistakenly thinks she dreads hearing, and a terrific gag involving multiple wedding rings. Less successful are the film’s dramatic elements, which start and stop rather unevenly. The film is bogged down by a subplot involving a mine and a sinister get-rich scheme, which I’m sure made a bit more sense in the play. There is also a scene involving hats that just doesn’t inspire the laughs it was meant to.

The film is evidence that Buster Keaton did not have the confidence of his studio when he first made the transition from Fatty Arbuckle’s comedy partner to a leading actor. Here, Keaton is fairly restrained by the material. For example, in one scene, we watch as he climbs through a window only to find himself face to face with the last person he wants to see. For a moment, Keaton stands on the window sill and teeters, dangerously close to losing his balance and falling face first back in the direction from whence he came. In this moment, I found myself anticipating a physical feat of pure comic genius, one that would hint at Keaton’s later spectacular death-defying feats. Instead, Bertie simply regains his balance and steps down. Like I said, this is not your typical Keaton film.

However, it is a film that moviegoers flocked to see upon its release in 1920, and because of its success, Keaton was given more control over the films that followed, films that have collectively come to be known as masterpieces of comedy. They had to start somewhere. Keaton fans will likely find The Saphead both fascinating and slightly disappointing, if only because they have come to expect much more from him. However, despite the constraints placed on Keaton, The Saphead remains a fun film. It is consistently interesting and has enough humorous moments to satisfy most fans of silent comedy. And of course it has Keaton. For those like myself, that is enough by itself. (on DVD and Blu-ray)