A Note of Respect and Admiration 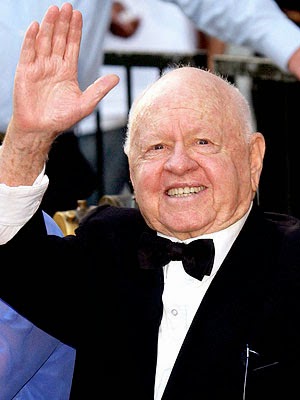 Mickey Rooney was born on September 23, 1920, and with his passing, we have lost a bit more of our connection to the past and to the early days of film. Mr. Rooney was 93, and he achieved fame fast enough to have been part of the tail end of three of entertainment’s most under-appreciated genres, Vaudeville, silent films, and short films. Imagine what it must have been like for a kid that young to be performing in front of packed theatres and taking in the applause of the crowd. His first film was Not to Be Trusted, released in 1926, just one year before Al Jolson uttered, “You ain’t heard nothin’ yet!” He successfully transitioned to talking pictures, voicing Walt Disney’s pre-Mickey Mouse creation, Oswald the Lucky Rabbit, and appearing in 63 Mickey McGuire shorts. He beat the odds. The number of people whose careers didn’t survive these transitions is staggering.

His career rose with the success of the musical, as well as the Andy Hardy films, yet struggled as he entered adulthood and could no longer play the babyface roles that had made him famous. However, he continued to make films, altogether appearing in them in eight decades. In total, he amassed 338 screen credits, some for television, many for films, and he was still working even at the advanced age of 93. In the works were Night at the Museum 3 and Dr. Jekyll and Mr. Hyde.

There was controversy, of course. While he was there to see the end of those regrettable practices known as blackface and yellowface, it was not before he himself donned the latter to play Mr. Yunioshi in Blake Edwards’ Breakfast at Tiffany’s. He was not the only Caucasian actor to have played this kind of role, yet because of the continued popularity of that film, it is his role that is often held up as an example of Hollywood’s mistreatment and disrespect of both Asian roles and Asian actors. It is a label he did not deserve.

Mickey Rooney was there for the enforcement of the Hayes Code, as well as its eventual demise. He witnessed the explosions of creativity and energy that the 1970s and the 1990s ushered in, and he was there to see – perhaps with a shake of the head – the demise of the Hollywood musical and the increasing dominance of the blockbuster. He witnessed the disappearance of the singleplex theater and the emergence of the multiplex. He was there for the introduction of IMAX and the resurgence of 3D. And through it all, he kept working, kept plugging away at the craft he so dearly enjoyed. True, he made films that are forgettable, yet he also made films that will stand the test of time.

There’s more. He was born at a time when women’s suffrage and prohibition were both in their infancy. The Great Depression hit when he was nine years of age, and at just 21, he was there to watch the United States enter the Second World War. He would live to see his country enter into five other wars after going overseas in what he and his generation likely thought would be the war to end all wars. His generation saw it all, from floods to dust bowls, from recessions to political scandals, from moments of tragedy for the nation to moments of incredible inspiration and hope.


He and the other members of the greatest generation there has ever been saw all of this, and his passing provides us a moment to reflect upon not simple the films and the accolades, but also the caliber of the generation he was part of. Simple put, we may never see their kind again, and I remain in awe of all they experienced and accomplished.
Posted by Azrael Bigler at 9:00 PM