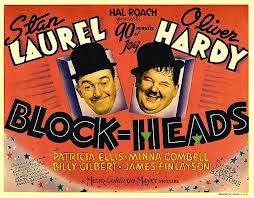 I have a warm spot in my heart for Laurel & Hardy’s 1938 film, Block-Heads. Mind you, this is not because I believe the film to be their finest, but rather because it may have been the first film of theirs that I ever saw. Perhaps more importantly, my memories of that first viewing primarily involve me sitting in front of a television with my father, the two of us laughing boisterously as Stan Laurel drove Oliver’s car through a garage door. This is how these films should be seen for the first time, as a shared experience from one generation to the next.

The set-up for Block-Heads is truly inspired. Towards the beginning of the film, our jolly pair is separated by war, Oliver sent into battle and Stan remaining behind to guard the post. To console a disheartened Stan, Oliver says these powerful words, “I’ll be back. We’ll all be back.” In a montage that must have been extremely costly for MGM (the film is said to be one of L&H’s most expensive ones), we see a montage of World War I battles, replete with bombs blasting, tanks rolling, and soldiers leading the charge. Soon, the words 1918 and Armistice appear, and the images turns jolly. War is replaced by parades honoring returning soldiers and confetti seemingly streaming down from heaven. Peace has come to a world made weary and wounded by four years of brutal strife. There’s only one problem: Someone forgot to tell Stan.

The film fast forwards to 1938, where we find Stan Laurel, still in uniform, dutifully guarding the post left to him so many years ago. As I watched this, I couldn’t help remembering that just seven years later, Japanese soldier Hiroo Onoda would begin his twenty-nine year ordeal in the jungles of the Philippines, all because he refused to believe that the war was over and that Japan had lost. Sometimes art imitates life; sometimes life resembles art. Eventually Stan and Oliver reunite at the Old Soldier’s Home, and Oliver convinces Stan to return home with him to meet his wife and have one of her delicious juicy steaks. It doesn’t take a rocket scientist to predict that things won’t go quite as intended.

With the exception of its moving opening scene, Block-Heads is not a very original film. It recycles heavily from previous films and pretty much abandons any reference to the First World War once Stan leaves the veterans home. It becomes a series of entertaining gags involving advances in technology, a building elevator, an angry wife, and an ex-girlfriend’s fond reminiscences of her time with Oliver. Oliver Hardy is his usual incarnation – weak in front of his wife, overcompensating when she is not around, and Stan Laurel, after two films playing against type, is back to being his old self  – clumsy, confused, and occasionally incoherent. James Finlayson makes a brief appearance as an upper-class tenant who gets into a verbal scrape with Hardy, and Billy Gilbert, playing a variation of the obnoxious character he played in The Music Box is quite humorous as Hardy’s neighbor, Mr. Gilbert. Interesting, it is his wife, played by Patricia Ellis, who steals every scene she’s in with her sweetness and caring nature. When she sees Hardy’s apartment after a gas explosion, she simply volunteers to help him clean up before Mrs. Hardy returns.

Block-Heads packs a lot into just under sixty minutes, and it remains a pretty enjoyable ride. It is a reminder of a time when men in film went to great lengths to hide their romantic pasts from their wives and when movie wives could be sweet one minutes and holy terrors the next. It was also a time when gifted comedians could get so many memorable comedic moments from simple bed springs and an awkward way of sitting in a wheel chair. For the most part, these times are gone. Comedy has changed, yet films like Block-Heads remind us just how much fun the past can be. Gentlemen, I salute you. (on DVD)