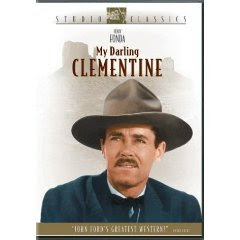 It is possible that nothing better illustrates the transformative power of the Old West than the transformation of Dr. John Holliday. Once an aspiring doctor, the West eroded much of the man who used to spend his days curing others of ailments. Wyatt Earp, according to Hollywood at least, was his opposite, a man of principle who put family and law before personal gain and who was not corrupted by the lawlessness of the time. Perhaps the friendship they formed was one of convenience, forged out of their mutual desire to keep an eye on the other. Perhaps each of them reminded the other of who they could have become if circumstances had not been what they were.

The friendship between Dr. John Holliday, better known as “Doc” Holliday, and Marshal Wyatt Earp is one of the central elements of John Ford’s 1946 film My Darling Clementine. Played effectively by Victor Mature, “Doc” is a complex character. His room is filled with evidence of the honorable profession he is still a member of. Plaques and degrees adorn his room, as do pictures of the community he was a part of. The professional in the pictures on the wall barely resembles the solitary and dangerous loner that we see in the film. Resembling in every way a man of power, a man that others should be afraid of, the first thing we see him do is throw a customer out of a saloon for cheating. Not only does he throw him out, but he runs him out of town as well, as if he not Wyatt Earp (a very effective Henry Fonda) were the town marshal. Compare that with the impression Wyatt Earp gives us in the film’s opening moments. While moving cattle through the desert, Wyatt notices two onlookers and approaches them alone, even though his three brothers are with him. Not only does Wyatt do this without giving off the slightest hint of fear, but he also spurns the two men’s repeated offers to buy the cattle, reasoning that he can get more for them in Mexico. One immediately gets the sense that this is a decisive and principled man, one who approaches hazards head on.

Traveling with Wyatt are his three brothers, Morgan, Virgil, and James, who is just eighteen years old. After James is murdered and the brothers’ cattle stolen just outside of Tombstone, Wyatt accepts the position of marshal in that town because with the position he will be better able to find his brother’s killers. Yet Wyatt is incapable of doing a job halfway, and he sets himself to being an effective and lawful marshal. Every morning, he sits outside the local inn, surveying all of the people entering, exiting, and walking through the town whose care he is entrusted with. One day, his life is altered irreparably when a beautiful young woman named Clementine Carter arrives looking for the man “Doc” Holliday used to be.

My Darling Clementine is a film that demands repeat viewings, as many of its characters are revealed in unexpected and quietly powerful moments. Look at the stolen glances that Wyatt gives Ms. Carter or the revealing gazes of Doc’s lady friend Chihuahua (Linda Darnell). Also fascinating was the scene in which Wyatt introduces himself to the Clantons. Instead of a close-up on Henry Fonda, we only hear his voice. It is the expression of Old Man Clanton (Walter Brennan) that tells us that he knows what this names means for him and his sons. However, my favorite moment of the film was when “Doc” and Wyatt attempt to find a missing actor who is supposed to perform that night. They find him in a saloon, having been forced to deliver his performance in front of a mocking and disrespectful bunch of ruffians. Wyatt’s first impulse is to free him immediately; however, “Doc” is drawn to the poetic words of William Shakespeare and, he asks for a moment to listen to them. Leaning closer to hear every word, the actor’s memory fails him; unexpectedly, he asks the educated doctor to finish the lines for him. Doc does not disappoint, picking up exactly where Mr. Thorndyke left off and delivering the lines with quiet passion and sentiment. However, "Doc" is unable to finish the entire soliloquy due to a potentially hazardous throat condition. In one of the greatest moments of foreshadowing that I can recall, the last line he recites is “Thus, conscience does make cowards of us all.”

As My Darling Clementine progresses, it is clear that several stories are reaching their climax concurrently. It is a testament to the magnificence of the film that each of these plotlines draws the viewer in and holds his attention throughout. It is only fitting that one of its closing scenes is one of the most famous gunfights in history, the duel at the O.K. Corral.

Much has been written about the version of the film that was released in 1946 and about what happened to the film after John Ford was removed from the picture. Having seen both the 1946 version and the pre-release version, I will say that I preferred the tone, timing, and silence of some of the scenes in the pre-release version to the loud, sound-filled, fast-paced editing of the 1946 version, as westerns seem to warrant a slower pace. And I have to agree with Ford that it seems grossly out of character for Wyatt Earp to kiss Clementine’s cheek at the end of the film. I much preferred the stoic, slightly heartbroken man who gallops off into the sunset at the end of the pre-release version. However, these minor quibbles do not in any way take away from the power and the emotion of the 1946 version of the film. Simply put, My Darling Clementine is a must-see. (on DVD)

Labels: 4 and a half stars, Henry Fonda, John Ford, reviews